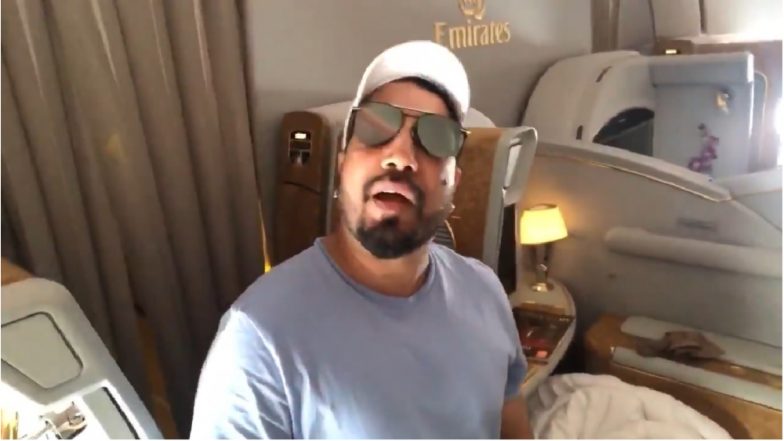 Mika Singh recently was in the news because he apparently booked the entire First Class of luxury airline Emirates and then made a video boasting about it and how he was starting a new trend with this act.

In the video, Mika said that,

“Today, I had a great show in Dallas. There was a time when Michael Jackson used to say that he wants to travel alone and today, I want to travel alone. I want no disturbance, ek bhi aadmi mujhe first class mein nazar nahi aana chaiye (no one should be in my purview), so I booked the entire first class for myself.”

“I hope I have set off a trend and after this video, now all the big celebrities and superstars will follow me” he further said.

“There is no one in the entire First Class. Sirf ek sher hay (There is only one lion here). And you need guts to do this”

Mika, however, was trolled relentlessly for the cringey and hilariously awkward way that he was trying to show off how much wealth he has, with other singers like Shaan and more also mimicking him.

The thing here is that, while there is nothing that is essentially wrong with trying to shamelessly brag, but it was this unnecessary spending and then the idiotic way of putting it out that just completely tanked whatever point he was trying to make.

There is a certain art to blowing your own trumpet that you must know before trying to just splash your wealth around and coat with a nice social message.

There are a bunch of Hollywood celebrities that are known for their diva demands most popularly Jennifer Lopez who has her team send out particular lists to hotels and studios before her arrival so that they can get things ready.

According to sources, once for a BBC Interview, she required dressing rooms for her 90 person team.

It is also said that while Lopez was performing at the World Music Award in 2010 she demanded that the private beach and full hotel floor be reserved for her along with a 12 people hair and makeup-team, a stand-by helicopter, custom speedboat and diamond-encrusted headphones that cost about $4400 to block the speedboat’s motor noise.

Not just that, but Lopez has also been said to demand white Egyptian cotton linen and sheets with a thread count of about 250 everywhere she goes.

Apart from Lopez, Mariah Carey would be another singer who is known for her diva demands and wanting everything around her a certain way no matter the price.

George Clooney too showed off his wealth at the recent Royal Wedding of Meghan Markle and Prince Harry by acting as a bartender and pouring shots of his exclusive Casamigos Tequila, which is a super premium tequila brand.

Read More: Modern Feminism Is Only For Rich People, It’s The Poor Who Actually Suffer

It is not that Mika tried to flaunt how powerful and rich he is that he can book an entire First Class of one of the most expensive airlines currently. But it is the way he did it that.

Because as we can see, that others also do it, people who are much more famous and wealthier to Mika have done so much more, but the difference is that they never report it themselves.

You will never see Lopez flaunting about how she got expensive Egyptian cotton sheets in her room, or Clooney making a video about his expensive lifestyle.

That is where class shows and even if Mika is trying to come into the big league of stars and do something like his icon Michael Jackson, he should remember that he never really lost respect as an artist and always conducted himself in a refined manner.

It seems that Mika and certain Indians still need some lessons in class and grace since if you want to start a trend at least start something that has some more poise and impresses others instead of making them troll you.

There is a certain art to shouting about your wealth and how rich you are and that needs to be done in a digestible way. Not while embarrassingly looking like a nouveau rich dude who wants to come into campus with his swanky convertible foreign car with 10 girls in short skirts standing and fawning all around you. And if you want that, then be prepared for the same kind of reaction we give to those kinds of guys.