If you follow famous meme accounts on Instagram, then you must have noticed that billionaire and former mayor of New York, Michael Bloomberg, has been the subject matter of a lot of memes recently.

Since he is currently a candidate in the Democratic party primaries for the 2020 United States Presidential Elections, Bloomberg wants to connect with the millennials and what’s a better way to get their attention than to make yourself omnipresent on their Instagram feed?

More About The Campaign

Bloomberg’s campaign has been working with Meme 2020, a company founded by Mick Purzycki. Purzycki is the chief executive of Jerry Media, a meme media and marketing company.

The billionaire has paid for memes on many accounts with millions of followers. He even had memes shared from Jerry Media’s account which has close to 13.3 million followers. 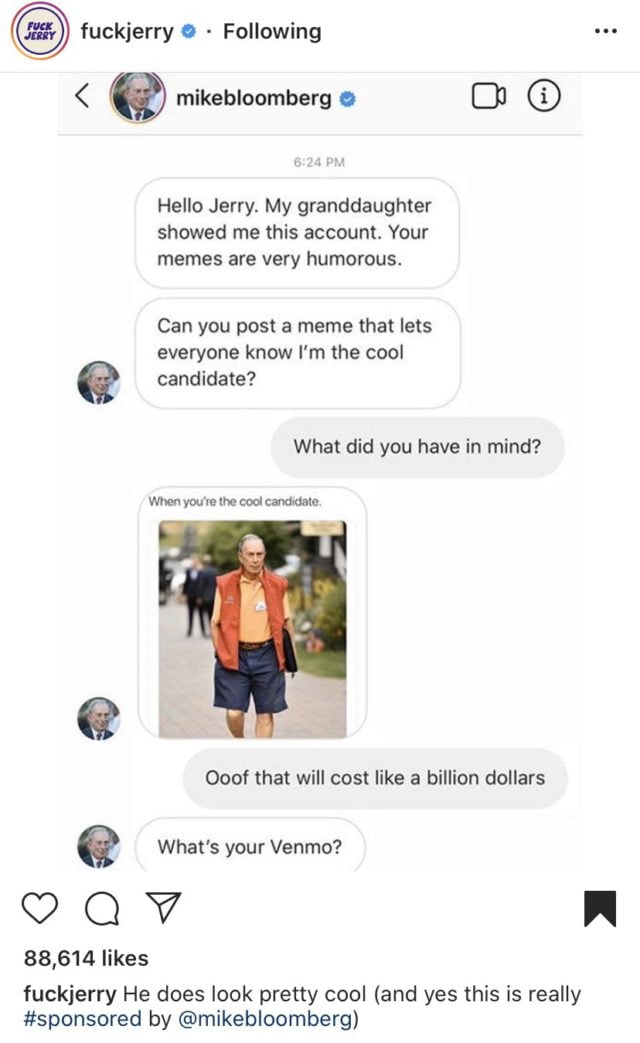 All of these accounts have posted screenshots of fake direct messages from Bloomberg asking the influencers to make him look like ‘the cool candidate’.

Here are a few of these memes: 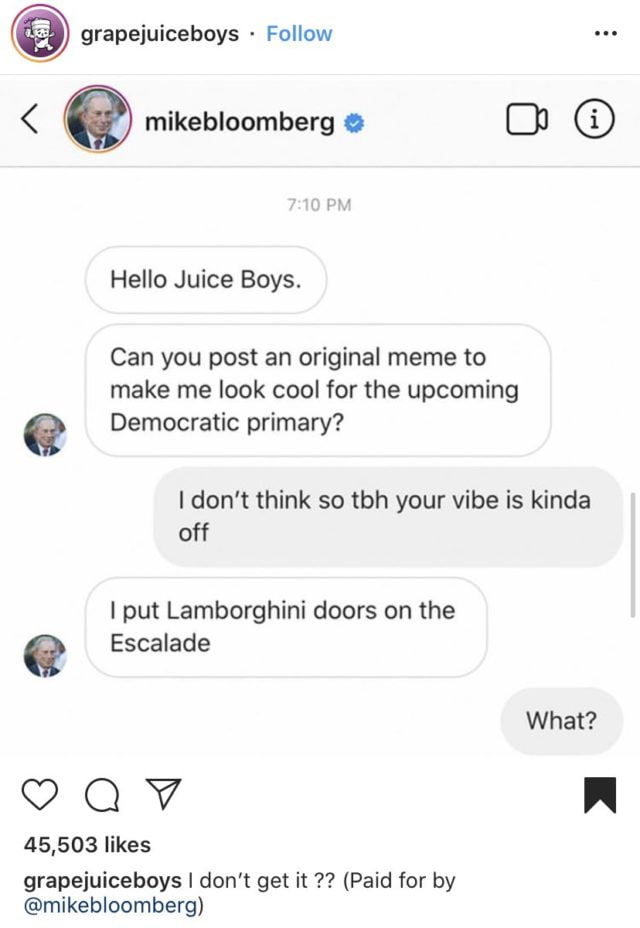 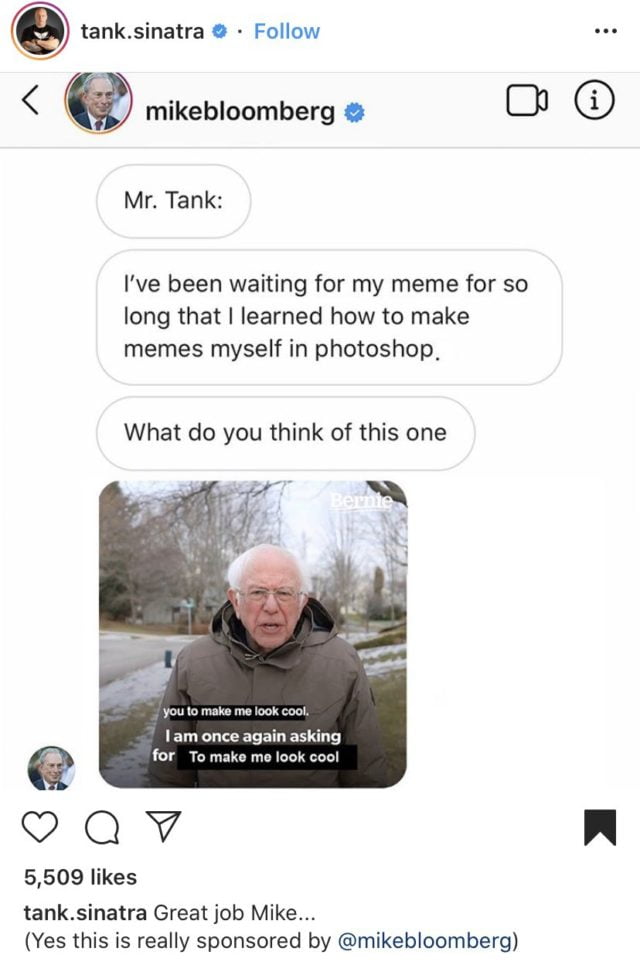 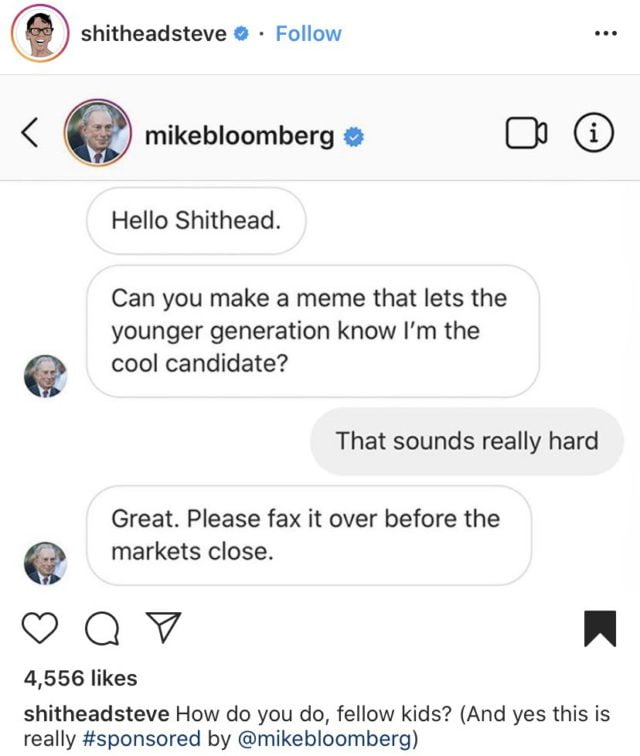 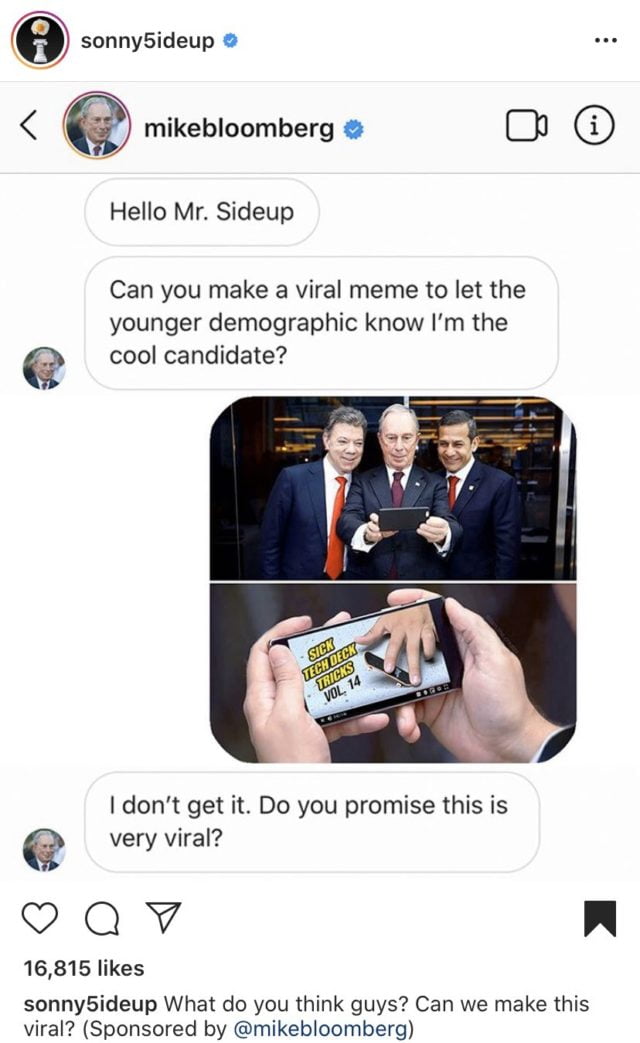 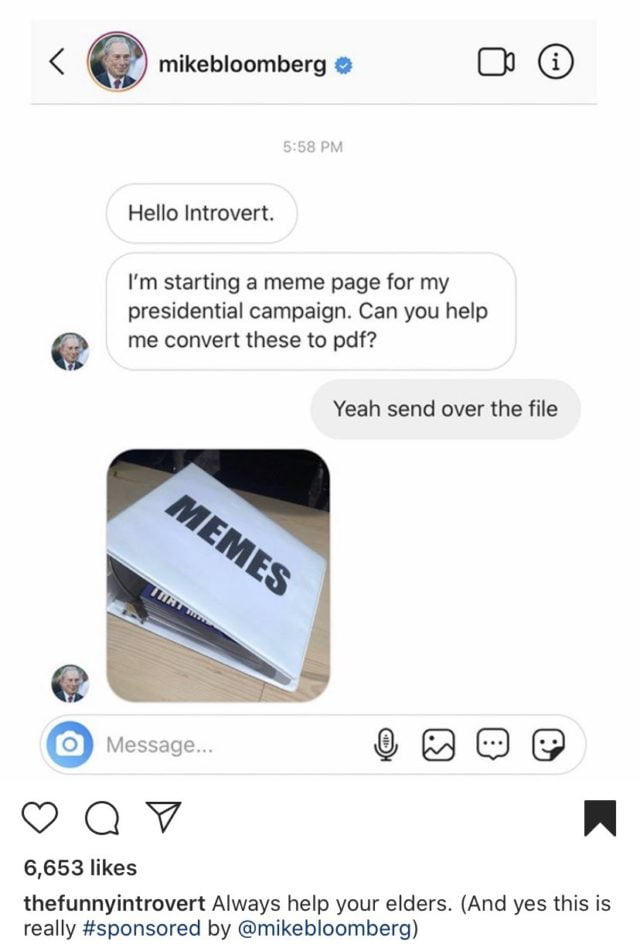 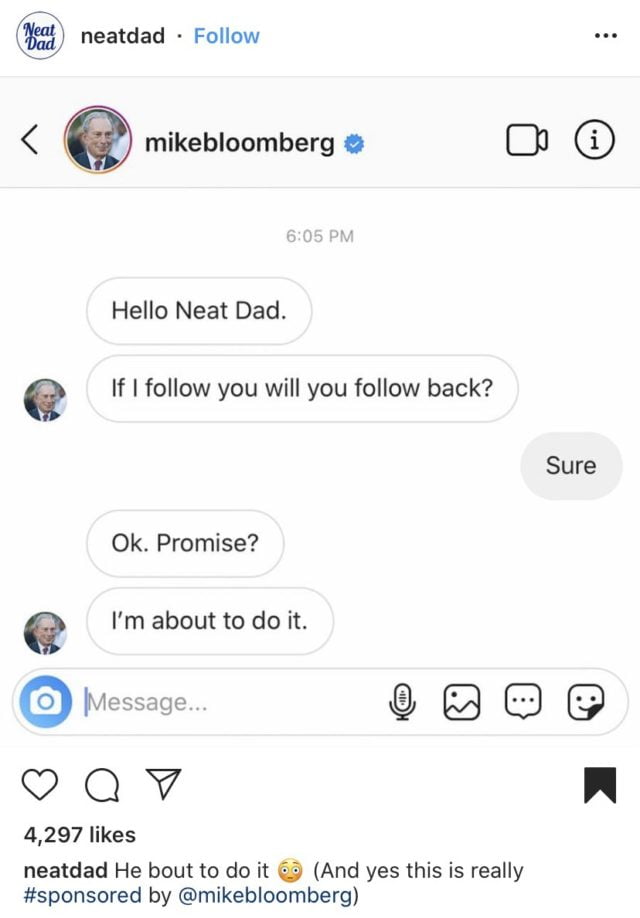 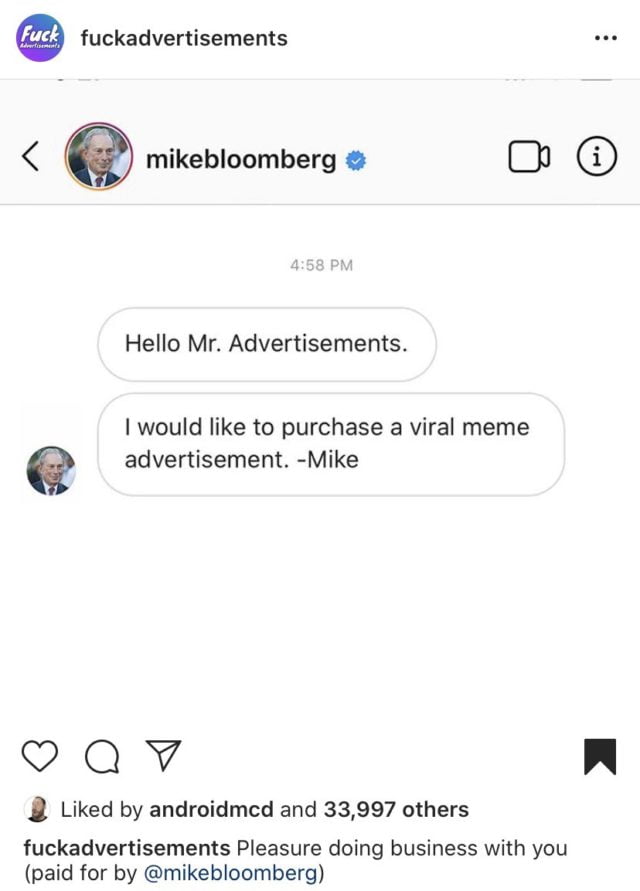 Many users in the comment section mentioned how they were confused if the posts were genuine or a coordinated joke from the meme accounts. But, the tens of thousands of comments under these posts definitely ensured the level of engagement that they were targeting.

If these elections have taught us anything, then it’s that getting people to talk about you is the key to keeping you in the race.

“We’re trying to be innovative with how we’re translating the campaign message on social, trying to do it how the internet actually works. Tweeting from @mikebloomberg is a very 2008 strategy,” an advisor to the Bloomberg campaign told the New York Times in an interview.

He continued, “The way Trump’s campaign is run is extremely social first. We’re trying to break the mold in how the Democratic Party works with marketing, communication and advertising, and do it in a way that’s extremely internet and social native.”

What Are People Saying About This

Many people have claimed that the Bloomberg meme campaign did create a wave in the social media world, but it was a negative wave. Many users have even made memes to criticise Bloomberg’s previous policies.

“They don’t see it as authentic. They’re fighting back by taking those memes and turning it into negative memes,” said Joe Gagliese, co-founder and CEO of agency Viral Nation.

“It’s all fun, but it’s not on-brand with what you would expect Mr. Bloomberg to be,” he added.

Jason Wong, the CEO of Wonghaus Ventures said that the memes were ‘perfectly formulated to go viral’.

“They essentially made it seem like, ‘It’s a joke, they didn’t [run a sponsored post]. But maybe they did…’ So people start making content to that similar to that on their own,” he explained.

Why Is Everything Getting Political These Days?

From the memes you come across to the food that you eat, it is almost as if everything is tainted with politics these days.

Don’t get me wrong, I did enjoy the memes initially and I do understand that memes are an effective strategy to reach people and help the campaign go viral especially when competing with Trump’s powerful digital operations.

But, these strategies do beg the idea that literally everything is trying to mould our political inclinations to the point that there is very little left to a person’s own rationalisation nowadays.

It is time for us, as the audience and the citizens, to realise that these are nothing more than marketing tactics and not make our choices based on them.

Obviously, no one will completely form their opinions based on memes, but these memes should not even be a small part of the reason for why one is in favour of a particular candidate.

What do you think about this? Let us know in the comments below!