Bipolar Disorder is a mental illness, which involves phases of mania and depression. During the mania phase, the person experiences bouts of extreme energy, happiness, irritability and creativity is at a high point. In the depression phase, the person goes extremely low moods that can prove to be even suicidal in extreme cases. People often confuse this ailment with clinical depression, when the concerned person is in the ‘depression’ phase. However, the plain and simple difference that lies between the two is that clinical depression involves no symptoms of mania like elevated energy levels, loss of sleep, extreme goal directed behavior among others; whereas bipolar disorder includes it. People suffering from bipolar disorder often show an artistic streak and many famous personalities have battled bipolar disorder to emerge strong and establish a successful career. Some of them include Vincent Van Gogh, Ernest Hemingway, Sidney Sheldon, Kurt Cobain and Stephan Fry to name a few. 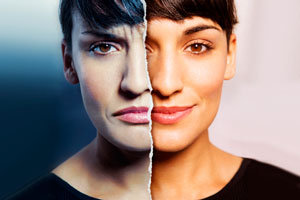 However the aim of this article is not to look at the downsides and sad stories (for there are many already) of bipolar disorder and create awareness about it, but rather look at it from a lighter perspective. That is, through films, television and books.

In the past couple of years, we have come across various stories about, or involving characters suffering from bipolar disorder. Here are a some well-known characters:

Ankita Sharma from ‘Life Is What You Make It’ by Preeti Shenoy: The story starts off in a great way and talks of a girl, who basically, has it all. She’s beautiful, smart, has great friends, people swooning over her, comes from a reputed college and is on the verge of gaining a MBA… and then her downfall. The character is that of an average college going student, who gets affected by bipolar disorder, and makes you realize that even if the person may conform to the social standard of being physically/ mentally/ emotionally ‘normal’, he/she might be facing such problems. It breaks the common stereotype of people facing mental issues and focuses on how a bit of love and care, can set everything right. Ankita Sharma comes across as extremely relatable; her choices, and reactions to the events taking place in her life, seem to echo those of any other young person. One can feel her pain throughout the book, and her vulnerability in situations makes the reader feel vulnerable too. The book, despite not revealing her malady explicitly till the end, gives sufficient hints that she is suffering from bipolar disorder through instances of painting, colourful notes, extempore speeches and restlessness, which makes it obvious for anyone who has read about bipolar disorder to identify the problem. Towards the end of the book, Ankita comes across as a strong personality who fights against the odds, utilizes her talents of writing and art, and follows her ‘true’ dreams, as opposed to conforming to her parents’ mindset of an ideal life, which is a great inspiration for everyone.

Carrie Mathison from ‘Homeland’: This CIA agent simply oozes spunk. She neither cares about what others think of her, nor hesitates twice when it comes to breaking the rules for the greater good, and holds her own in a man’s world (most of the other agents, if you’ve noticed, are male, hence the ‘man’s world’). Although, the TV series doesn’t revolve around her disease, the disorder plays a pivotal role towards the end of the first season. Having bipolar disorder, in my opinion, makes Carrie somewhat more astute, and capable of viewing things in a different light, as compared to her colleagues. One instance of this, is when she makes a whole colour coordinated collage, tracking the activities during different periods of Abu Nazir’s life, which could have provided a great deal of help to her counterparts at CIA, had they not branded her a madwoman. As mentioned before, bipolar disorder patients are often seen to have extreme artistic and cognitive abilities, and Carrie is no exception. Her ability to perceive things in a different manner has always been an asset for her. She mistrusted Brody and declared him a terrorist, at a time when everyone was going ga-ga over him and believed he was the epitome of goodness and bravery, only to be proved right. To add to that, she seems to have an adrenaline rush from time to time, which could possibly be the result of a phase of mania. It is this very rush which keeps her on her toes, and makes her nail the bad guys and get into risky situations, which as per others can be averted.

Charlie from ‘The Perks Of Being a Wallflower’: ‘Wallflower’ Charlie, a grief stricken child, and his trials and tribulations at a new school with a motley set of friends forms the crux of this coming-of-age story. Although most people would reason that Charlie suffers from Post Traumatic Stress Disorder, some believe that the highs and lows one observes in his character can be attributed to bipolar disorder. However this is pure speculation, as the author doesn’t mention it in the book. Other films such as Michael Clayton & Heroine include characters suffering from bipolar disorder.

Throughout history we’ve witnessed that it is those who are different, are willing to go against the grain of society and stand up for what they feel is right, are the ones who are most successful. So it’s better to embrace your uniqueness, your assets and your flaws, because you’re unique…just like everyone else. ☺