Home Entertainment Kunal Kamra Landed Up In A Legal Tiff With BSE And How! 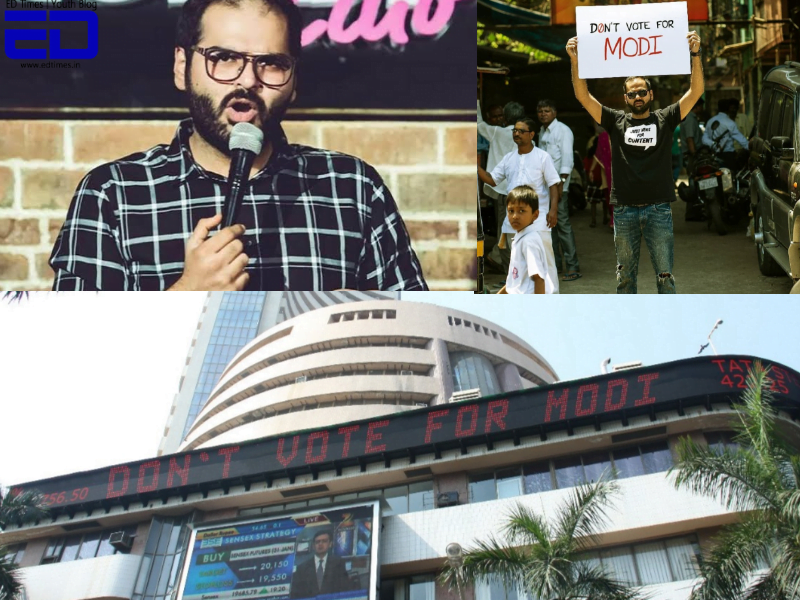 Kunal Kamra is the new face of controversial comedy after Tanmay Bhat.

Ever since his first viral video against the BJP government and his YouTube series ‘Shut Up Ya Kunal’ has been in light, he has been called out by the right-wing ideologists as “Leftists”, “Communist” and “Anti Nationalist”.

Kunal Kamra has been recently posting series of photoshopped pictures with one constant message “Don’t Vote For Modi” and occasionally “Also F*ck Congress”.

However, this did not seem to go down well with Bombay Stock Exchange (BSE) who condemned Kamra on Twitter for uploading the photoshopped picture of the BSE building and claimed to take legal actions against it.

Kunal Kamra seems to have taken this warning as a joke and took to Twitter to have his own laugh.

Twitterati, on one hand, is targeting him for his “propaganda” while the rest are questioning the “sense” of Sensex.

Here are some of the most hilarious tweets on the issue.

There are Chowkidaars who are claiming to have sold their equity after seeing Kamra’s tweet while we here are afraid these people are going to vote in 2019 Lok Sabha Elections.

Although Kamra urging people not to vote for Modi, is legal and comes under his right to freedom of expression, BSE has sought to take legal actions against him on different grounds.

As reported by the Scroll, BSE has a trademark registration for the building according to which artist or brands seeking the building for commercial purposes have to get consent from BSE.

However, the guidelines for use of building for non-commercial purposes have still not been framed yet.

Some Twitteratis argue that using the BSE building for a meme comes under “non-commercial purposes” and hence cannot be questioned. Twitterati has been putting the blame on the government for targeting and controlling yet another institution.

Meanwhile, the restriction on freedom of expression of comedians continues to be a debatable topic with comedians constantly being under fire for their political and controversial jokes.

Whether this threat by BSE takes a form of legal action or gets lost like every second viral tweet, is an awaited story to tell.

How Comedians Are Doing A Better Job At Journalism Than Journalists