India is known for its diversity and culture. The country showed progress at a skyrocketing speed and was recently classified as a “developed country” by the United States.

India has shown remarkable growth in recent years in almost every field but one thing it fails to fight is the prevalent patriarchy.

We have sent our men to the moon and made our women climb the Mount Everest, but still a typical Indian mindset fails to look at human beings beyond their caste and faith.

The caste system followed in India is like a plague to its development. It is 2020 and people are still against inter-caste marriages. In addition, people who fall in love outside their caste or faith are threatened for their lives and are considered socially unacceptable.

However, the good news is that the Kerala government is taking a great initiative to break such stereotypes.

The Kerala Government has recently announced to open ‘safe homes’ for people who decide to marry out of their caste or faith and are boycotted from the society.

The Minister of Health and Social Justice, K K Shailaja was one of the forerunners of this initiative and she informed the assembly that the newly launched project will be executed soon.

Learning from past incidents where honor killing or torturing inter-caste couples was celebrated, the Kerala government takes a step forward to fight such a social evil.

What Is A Safe Home?

As informed by the government officials, a ‘safe home’ will act as an accommodation or a temporary shelter to couples opting for inter-caste marriage.

Such couples can stay in these homes for over a period of one year after their marriage. The idea is to provide a secure and private space to those couples for whom falling in love with someone outside their caste is considered a crime.

It was observed that a lot of inter-caste married couples who flee from their homes and look forward towards a new start are denied basic resources and are looked down upon by the society.

Also Read: Madras HC Allows Inter Caste Marriage As It Feels It Will Root Out Caste System In India

Moving forward to break such a stereotype, the Kerala government is making sure that it celebrates the idea of love and gives due to respect to everyone irrespective of their caste or belief.

Here’s More To It…

Not only this, the Kerala government is making a big win in the name of love.

Under this safe home project, the couples won’t just be given a temporary accommodation but also some financial aid by the government to begin this new journey.

With the help of some volunteering organizations and in collaboration with the Department of Social Justice, a financial grant of Rs. 30,000/- will be provided to couples belonging to the general category and a sum of Rs. 75,000/- will be given to couples hailing from the schedules caste category. 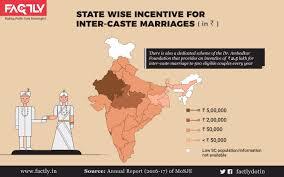 These resources are made available to these couples so has to make them feel safe and empowered. The financial aid is to provide backing to these outcasted couples so that they don’t feel burdened or helpless in such situation.

A report published in 2018 by the Amnesty International says that ‘more than 200 hate crimes of honour killing for marrying outside the caste was reported in the year.’

While the debate was ongoing on the widespread prevalence of honour killings and the mindset behind the same, a horrific case of a 23-year-old Dalit Christian man and woman killed by the family due to their rebellious marriage came in the limelight.

This incident shook the entire state and the idea of ‘safe home’ was proposed and soon converted in a project. Two years down the line, the benevolent initiative is ready to take its shape and will be an open call out on patriarchy and the taboo around inter-caste marriages.

The government plans on opening safe homes in almost all districts of the state and also has ensured strict actions to be taken against those who encourage hate crimes or honour killings.

This step taken by the Kerala government is greatly appreciated. With this said, we hope that other states also come forward to run such an initiative and project ‘safe home’ is launched all across the country giving the message of love, peace and harmony.

This Facebook Page Wants To Detox Indians From The Caste System