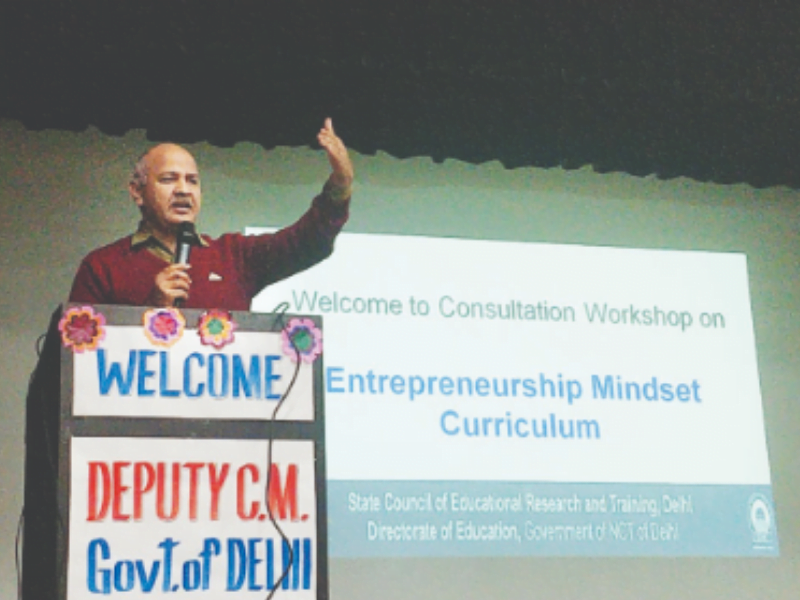 The government schools in Delhi have undergone a radical change in terms of both infrastructure and policies in the recent times.

Introduction of ‘Entrepreneurship Program’ for government schools in Delhi is just another example of a positive change in the education sector ever since AAP came into power in the capital city.

The idea is to empower young students, who mostly come from poor economic background, to be able to stand shoulder to shoulder with students who have access to better resources.

The program would enable students from government schools to learn about entrepreneurship in order to become future leaders.

It was first announced by the Deputy Chief Minister of Delhi in a panel discussion: ‘Living Mindfully: Initiatives and Learnings’ at New Delhi Institute of Management (NDIM) in December last year.

The curriculum is for students from class 9th-12th and is aimed towards arming them with necessary practical skills required in future employment opportunities.

On the 13th of February, ‘Entrepreneurship Mindset’ Curriculum Framework for government schools in Delhi was finally launched in the presence of well known entrepreneurs Dharampal Gulati, Binny Bansal, and Krishna Yadav.

The objectives of the curriculum are to develop critical thinking, creativity & confidence of the students studying in the schools. The curriculum is designed in such a way that it encourages communication & collaboration and helps develop problem solving ability.

The program is designed by State Council of Educational Research and Training (SCERT). The program uses entrepreneurial case studies and approaches to develop characters and traits that are needed in entrepreneurs.

Additionally, there is seed money offered by the Delhi government to students in order to kickstart their entrepreneurial projects and ideas.

The introduction of such a program to boost the government education setup is definitely a step in the right direction. The AAP government has been working tirelessly to transform the education and sanitation situation in the city.

The introduction of ‘Entrepreneurship Mindset’ curriculum just goes on to show the lengths at which the Delhi government is willing to go to better the education sector of Delhi.

What do you think about the introduction of this curriculum, let us know in the comments below.