Bollywood and movie critics always had a somewhat love-hate relationship, especially considering the influence the latter can have on the former’s box-office collection.

A bad review by critics can impact a film and bring losses since audience could skip it based on what reviewers are saying about it.

So in way, the fact that the movie industry is always trying to appease critics or even paying some, in order to ensure a good review, is not that shocking. But I also believe the audience are pretty smart for the most part and can understand which review is paid and which is genuine.

However, in an interesting twist, a press release by the Federation of Western India Cinema Employees (FWICE) was tweeted out by Yaseer Usman, a journalist.

In the images, the FWICE is apparently imploring critics to be careful while reviewing movies since it is the hard-work of many people and a lot of investment has gone into it.

The press release specifically mentions ‘high budget films’ since they have more money put into them and so especially for these films, critics should be careful while reviewing.

The Notice Is Stupid

First of all, such kind of a notice is extremely stupid where the authorities are asking the critics to go easy on films instead of asking the film industry to create better films.

Basically, they want good and positive reviews of films so that people get duped into thinking a movie is good when it might very well be trash.

By appealing to the emotional side with lines like

It even tries to create the visual of how critics can establish or demolish the career of actors, as if the critics are some nasty villain, twirling their moustache and thinking of which actor to ruin next.

It ends with how these poor big budget filmmakers are innocent creatures who need to be saved from the big bad critics by saying that, “it is need of time that such big budget film makers survive in the industry as they are the medium of employment to lakhs of hands who can earn their daily bread.”

Second of all, why just ‘big budget movies’? What is so special about them besides the fact that a lot of money is wasted on them for unnecessary special effects, designer outfits and splashy songs with over a 100 background dancers?

Instead, the federation should be asking critics to actually review the low budget or regional films besides the mainstream commercial films. It is those movies that even after being well-made and with a good story do not get the attention they deserve since they don’t have the backing of a big and powerful production house.

Critics are already reviewing the big budget movies and even if their opinion is negative, we can see that it does not affect the revenue of the film in the slightest.

Race 3 even after getting trashed by almost every reviewer and even the audience for that matter, still managed to earn a whooping Rs 303 crore much above their budget which was around Rs 150 crore.

Even the recently released Student Of The Year 2 is getting good reviews from some acclaimed movie critics just because… Karan Johar and Dharma. And in terms of revenue has already earned a decent Rs 73.32 crore worldwide against a budget of Rs 80 crore and getting the 9th place as the highest-grossing Bollywood film of 2019.

So do tell me exactly how these negative reviews, “mitigate the downfall of the economy of the film industry.”

#SOTY2 is cromulent ,film has correct dose of entertainment, good music & engaging screenplay. @ITIGERSHROFF performance is fantastic in every aspect, debutant Ananaya SHINES ,Aditya did complete justice to his part & Tara is mediocre . Film can work at the BO . Rating- ⭐️⭐️⭐️ 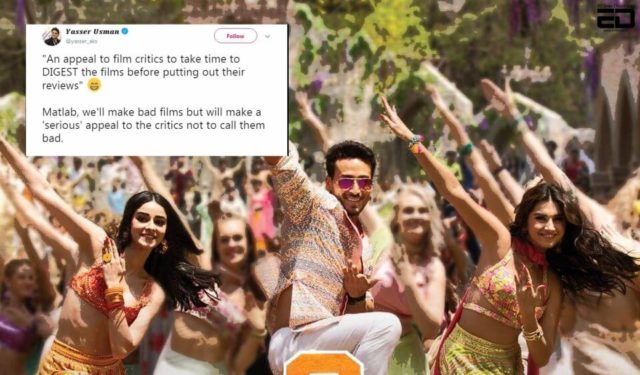 Read More: We Aren’t Competing For Some Race For Love, Students Are Actually Trying To Crack JEE: Kota Factory Vs. SOTY 2

The fact that critics are being asked by the federation itself to give preference to big budget movies is disappointing to see.

More so because critics are already showing a biased treatment to big budget movies and ignoring the small budget movies or those made by lesser known directors.

Case in point is the recent issue with Rajeev Masand, known Bollywood movie critic being called out for outright ignoring The Tashkent Files, a movie directed by Vivek Agnihotri on the controversial death of late PM of India Lal Bahadur Shastri.

Dear Mr Pandit. I expect better from you. Cant speak for my colleagues, but Ive repeated this a few times – I was traveling overseas and missed all films that released that week. So this conspiracy theory is pointless, unless it serves a convenient agenda. Happy birthday.

Masand has given the excuse that he was travelling and thus could not review the film, but he somehow could find time to review Kalank in April end and SOTY 2 just a week ago both of which are Karan Johar productions.

Agnihotri for his part has politely asked Masan to review his movie now that he is back in India.

No stress @RajeevMasand Now that you are back in India, you can see it now. It’s running House full in its 5th week. I am sure you will try to analyse why critics didn’t understand this film and audience is loving it.

Pl remember us when you do your annual round-table. https://t.co/UnGxE4am2d

It is strange though how none of the big reviewers like Anupama Chopra and the rest have reviewed this movie.

In my opinion, the notice should not be directed at the critics, instead it should either ask them to review all movies or tell Bollywood itself to raise its standards.