Home Politics Is The Karni Sena Vandalism More Political Than We Thought? 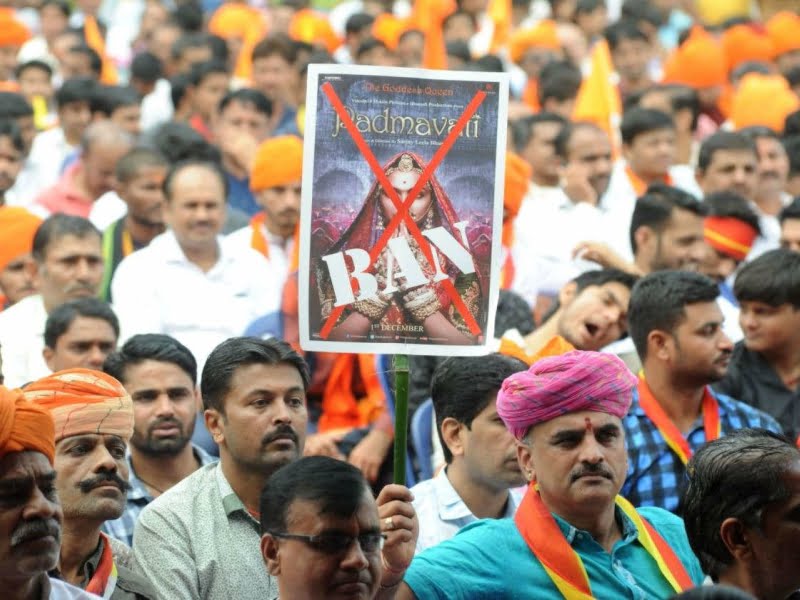 Khushwant Singh, writing in 2013: “We are a cowardly lot that burns books we don’t like, exiles artists and vandalise their paintings and we ban films and beat up journalists who write against us.”

And years later too, these words still haunt us.

Sanjay Leela Bhansali needs to thank the esteemed members of the Karni Sena, for the cheap and extremely effective worldwide publicity that his most controversial venture yet, Padmaavat has received.

Butt-hurt religious groups and various Hindu and Rajput fringe outfits have raised objections owing to the film’s release, however the Supreme Court of India has given a green signal to the filmmakers and has asked the government to not ban the film in any state.

Deepika’s bare midriff and her alleged romantic escapade with Alauddin Khilji is amongst many other incoherent reasons that the members of Shri Rajput Karni Sena feel are working against them as well as the entire state of Rajasthan and to take this matter of ‘distortion of history’ in their hands, the group has gone on a country wide rampage. “Rajputs never raise a hand on women but if need be, we will do to Deepika what Lakshman did to Shurpanakha”, is how Karni Sena wishes to maintain the sanctity of its glorious past. With a whopping 300 cuts, Karni Sena should have put Bhansali and the CBFC at rest but their most recent act of vandalism says something else. The G. D. Goenka World School students were on their way home one afternoon when supposedly some Karni members attacked the bus with sticks asking the driver to stop the vehicle. Windows were shattered and kids were seen crying for help.

18 offenders have been arrested so far. Yes, they attacked a school bus full of young, innocent kids.

We have risen to be a country that allows kids to be terrorized and assaulted in broad daylight just to satisfy the ego of some religiously guided men who have sought to protect the honor of this country by burning things and assaulting people.

You would imagine, the government of our country taking active steps when the Karni members ran out protesting in streets or started announcing bounty on Bhansali’s and Deepika’s heads, but you are horribly, horribly mistaken.

While BJP is giving a free hand to extremist groups, Congress is seen taking advantage of the situation. Allegations have arose, hinting at Karni Sena siding with Congress in the Rajasthan elections because apparently, BJP is harming the state of Rajasthan by letting Padmaavat release in the first place.

Karni Sena has been successful in spreading terror and massacring across the states of Gujarat, Rajasthan, Madhya Pradesh and Haryana, only because the leaders of these states let them be.

Our police forces aren’t actually inept, but the motives of our leaders like Vasundhra Raje, Manohar Lal Khattar spell out a contradictory story because the vote banks are more important than peace, law and order. They are hesitant to wage a war on those very people who brought them to power in the first place. It is in such times that the government has to play its role and show the perpetrators who the boss is.

When Shah Rukh Khan’s hit movie, My Name Is Khan was releasing, SRK casually expressed that Pakistani players should be allowed to play in IPL too. He didn’t anticipate the disaster that’d follow, because, hey, he was stupid enough to not know that every single Pakistani ever born is not a terrorist?

Related: SRK At Davos Gives The Kind Of Powerful Messages Millennials Should Take Note Of

Bal Thackeray’s Shiv Sena suddenly got offended because they hadn’t been in the limelight for quite long and getting offended was their best shot at fame, and hence they threatened to vandalize theatres and asked SRK to apologize before they would let the film release. SRK didn’t oblige and said he wouldn’t mind if the movie doesn’t release at all.

Seeing the oncoming vandalism, Maharashtra government and cops sprung into action. Shiv Sena members were warned that they would be rightfully detained and tried in court if they cause any harm to people or property alike.

Former CM of Maharashtra, Ashok Chavan announced that he would watch the First Day First Show of the movie and he stayed true to his promise. February 12, 2010, the CM and his team went to watch MNIK in theatres and showed the Shiv Sena who runs the state of Maharashtra. Mumbaikars too went to watch the movie in large numbers and this is how the people and leaders of Maharashtra stood up to respect the freedom of expression granted to us by the Constitution.

I am watching a movie, fearing for my life… while being guarded by hordes of policemen and security personnel. This is how screwed up the reality today is. Religious violence involving disruption of civic life, vandalism of property and assault on citizens should be absolutely shunned and prohibited if democracy is to survive in modern day India.

So on this Republic Day, I just wish that my leaders develop spine and my people develop some common sense which enables them to realize that true honor and valor only lies in the empowerment and freedom of the masses.

Married Female Actors Not Getting Work Is Probably Their Own Fault