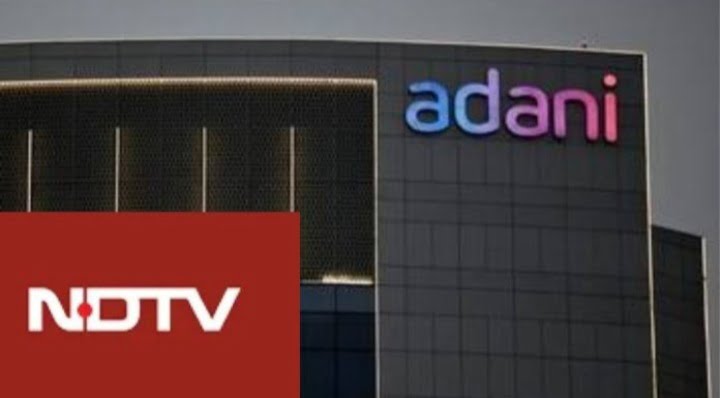 The past week has thrown some light on how the shares of the media company – NDTV are flying on the bourses. Not only did the company shares on BSE hit the 10 percent circuit levels in the morning hour of trade on 20th September 2021, but as of the last three days the shares haven’t budged.

In fact, in view of the recent merger between the two media giants – Zee and Sony, ZEEL zoomed 25 percent to hit a 52-week high of Rs. 319.50 on the BSE on Intra-day trade from which NDTV profited up to 10 percent at Rs.96.35. The stock is trading at its 52-week high level and rallied 33 percent in the past three trading days.

As the firm achieved 3,960 MW capacity, Adani became the largest private-sector thermal power producer in India. With a stock rise of 59 percent in a week, Adani has gained 285.6 percent in the last 12 months and has risen 198.5 percent since the beginning of this year.

Hence, it wouldn’t be much of a surprise if Adani were to acquire NDTV as its Delhi-based media house given both have been climbing the ladder of success at almost the same pace but the only problem is it is factually incorrect.

Response of NDTV to the alleged buy out by Adani Group

The Adani Group has been looking for a Delhi-based media house for a while now which many speculate to be NDTV. In fact, Adani recently appointed a veteran journalist and the president of Quint Digital Media – Sanjay Pugalia as the CEO and Editor-in-chief to lead the media initiatives of the group.

However, NDTV came forward to clarify that the rumor of Adani buying them out holds no ground as it is untrue. In fact, NDTV clarified the bourses that the founder-promoters of NDTV – Radhika and Prannoy Roy have never been in a discussion with any entity for a change in ownership or divestment of their stake in NDTV.

They individually and through their company, RRPR Holding, continue to hold 61.45% of the total paid-up share capital of NDTV. In a filing, the media house clarified –

“NDTV has no information on why there is a sudden surge in the stock price. As far as your query about the news article is concerned, NDTV cannot control unsubstantiated rumors, nor does it participate in baseless speculation.”

Response of the Adani Group to the possible buyout of NDTV

The Adani Group has clarified to the BSE that reports of its possible buy-out of media house NDTV, are ‘factually incorrect.’ They stated that no information or announcement was to be made on the same.

“We would like to submit that there is no such development and therefore, the above-mentioned news item is factually incorrect. We are unable to comment on media speculation or rumors and it would be inappropriate on our part to do so,” clarified the group.

They also stated that the fluctuation in the share price of the company is market-driven.

What gave rise to these sudden speculations?

The shares of NDTV hit its 10 percent upper circuit limit right when the speculations about the Adani-NDTV buy-out were wild.

With Adani’s entry into the media industry after the Adani Group introduced Sanjay Pugalia who headed the CNBC-Awaaz and was also a part of the Aaj Tak founding team as the CEO and Editor-in-chief, it was only a matter of time before speculations began to rise.