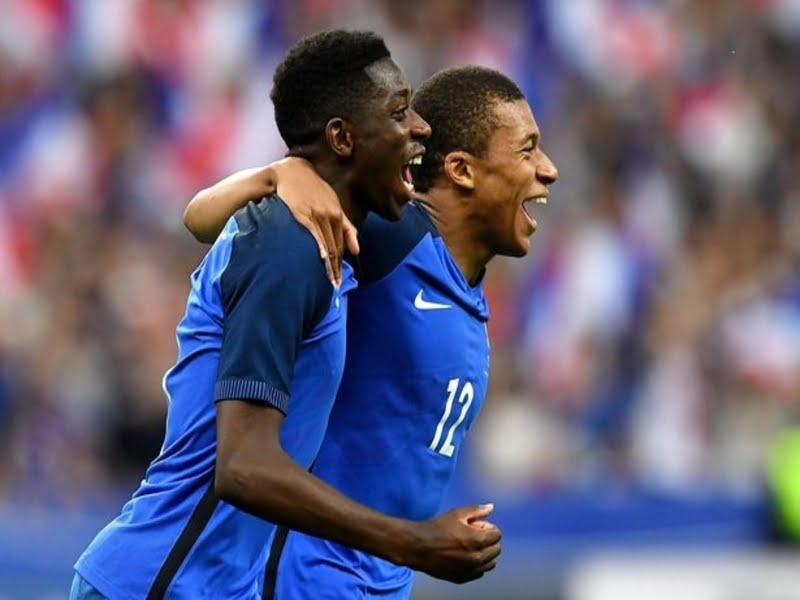 With football’s biggest showdown, the FIFA World Cup, almost here, the excitement is building every day.

Although FIFA has set June 4 as the deadline for submitting the final 23-man squad, most of the teams have announced their preliminary squads while some (Brazil, France, Spain and Argentina) have gone ahead even further and announced their final 23-man list that’ll be on the flight to Russia.

With the squads that we have out already, we couldn’t help but notice the amount of young talent that’ll be on display in Russia.

Also Read: The Top 5 Matches To Watch Out For In The FIFA World Cup 2018 Group Stage

In what is considered to be the biggest stage in world football, these young footballers will get a chance to showcase their talent and make a name for themselves.

And so, without further delay, we take a look at the top ten youngsters to watch out for in the FIFA World Cup 2018:

The 22-year old French winger has been under the radar of Premier League clubs like Arsenal and Liverpool for some time now. At Monaco, the youngster has become one of the most sought-after young players in Europe and Didier Deschamps has put his trust in him over Anthony Martial.

This young winger has got a new lease of life since moving to PSV, having scored 17 and assisted another 8 goals for the Dutch club. An inverted winger with impressive speed, Lozano likes to cut inside from the left and shoot with his preferred right foot.

Having already led the frontline for the Germans in the Confederations Cup last summer, Timo Werner is all set to fight for his place in the XI alongside Thomas Muller.

The RB Leipzig striker scored three and created another two to win the Golden Boot at the Confederations Cup and much is expected from the youngster at the big stage.

Sometimes, it’s hard to believe that Marcus Rashford is just 20. The Manchester United striker has a knack of scoring on debuts and so it wouldn’t be a surprise to see him scoring in his World Cup debut too. If the Three Lions want to have any chance of winning the trophy, this young kid needs to come out with guns blazing.

The Manchester City winger was in terrific form this season, having picked up the PFA Young Player of the Year award as well. The 2017-18 campaign saw Leroy Sane truly announce himself on the big stage as he scored 14 and assisted another 17 goals in all competitions for the Blues. His pace and technical ability will keep defenders on their toes in Russia.

The 22-year old midfielder, Dele Alli has the ability to change the game in a second and he has a lot of responsibility on his shoulders this summer. He contributed 9 goals and 10 assists for Spurs this campaign and he has to do much of the same if England are to have any chance at the World Cup.

The Real Madrid youngster, Marco Asensio, is a versatile forward who can play out wide or as a number 10. The 22-year-old has the talent that Spain coach Julen Lopetegui can rely on as Spain will look to regain the title 8 years after winning it in South Africa.

The French forward, Kylian Mbappe, was the talk of the transfer window last summer until he moved to Paris Saint-Germain for a loan move to be made permanent this summer.

He justified his move to the French capital with a superb campaign as he scored 21 goals and provided 11 assists for Les Parisiens. All eyes will be on him again as he is expected to spearhead the French attack.

Often labelled as the most talented 20-year-old after Lionel Messi, the French forward had an injury-marred first season at Barcelona, having moved from Borussia Dortmund for a hefty sum.

Now 21, the winger, Ousmane Dembele, is lightning fast and has the ability to shoot with both feet. He showed glimpses of his talent at Barcelona after coming back from injury and is expected to set the World Cup alight.

The 21-year-old will lead the Brazilian attack alongside Neymar at the World Cup. Having played alongside Aguero at Manchester City, Gabriel Jesus has improved himself as a striker and is set to make his mark on the tournament as Brazil look to win the World Cup with their ‘golden generation’.

There will be huge responsibility on the shoulders of these youngsters and it will be exciting to watch them battle it out in Russia.

ARE YOU NOT THRILLED?