Home Lifestyle How Is The Life Of Indian Ambassador To North Korea: Smt. Jasminder... 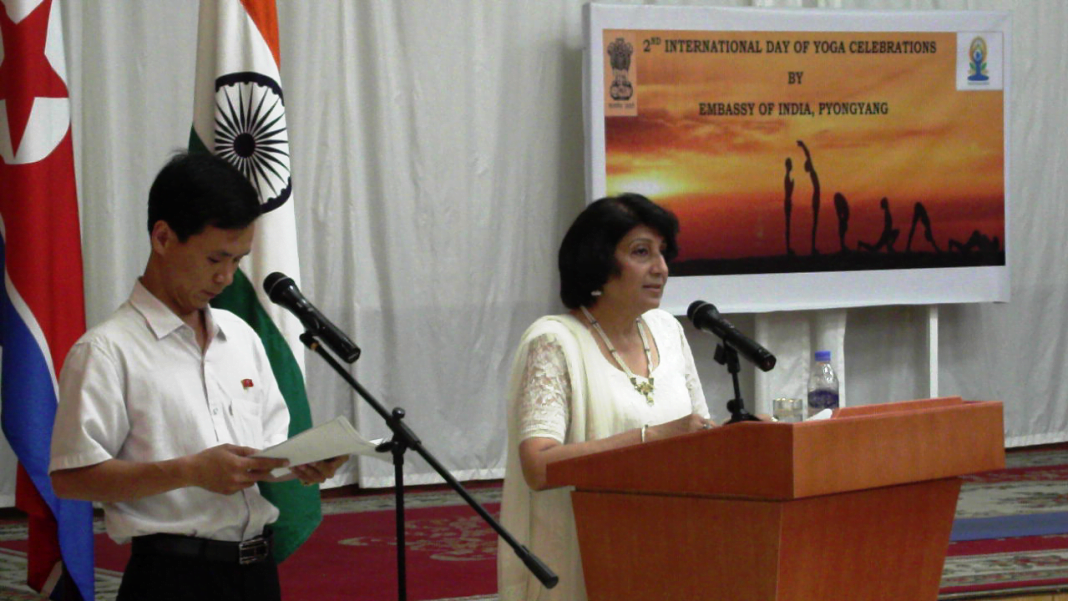 Ambassadors of a country have a pretty exciting life if one sees it from the outside. According to us normal people, Ambassadors of the country get to travel to beautiful and exotic locations, stay there and enjoy various amenities that the normal citizens do not.

But there are a few places that no matter what is being offered, people simply do not want to go there, one of them being North Korea. After getting no officially eligible volunteers for the post of Ambassador of India to the Democratic People’s Republic of Korea (DPRK), in 2015 PM Modi appointed Shrimati Jasminder Kasturia, a veteran Chinese interpreter.

What Do We Know About Smt. Jasminder Kasturia?

Ms. Jasminder Kasturia prior to being the Ambassador of India in North Korea was a Director in the Ministry of External Affairs (MEA) in Delhi.

Ms. Kasturia studied Chinese Language and Literature from School of Languages for her post-graduation and did her M.Phil from the Center of East Asian studies, School of International Studies, Jawaharlal Nehru University in New Delhi.

For a brief while, Ms. Kasturia also attended the Beijing Language and Culture, University in Beijing, PRC.

She joined the MEA sector of the Government of India in February of 1988 and since then has had a pretty impressive career graph. She has been spoken highly of, as per The Telegraph by diplomats of the IFS ‘A’ cadre, an elite group of less than 20 people that are picked from the toppers of the civil services examinations and even the academicians she has worked with previously.

But do you know what makes her appointment as Ambassador so interesting?

It is the fact that she is not even among the IFS ‘B’ cadre who usually comprise of stenographers, reserve diplomats and more who are promoted to the top tier so that they can be eligible for the position of Ambassador.

Ms. Kasturia, in fact, belongs to the ‘interpreter cadre’ who consist of the group that usually work with the main IFS officers to translate official documents and travel abroad with important political leaders on official assignments.

The reluctance from the higher grade IFS officers makes sense in a way due to the restricted amount of freedom, personal and professional, that exists in North Korea.

Read More: China Protects North Korea Due To Their Own Personal Interests In It

How Is Her Life As A Diplomat?

The diplomats in the DPRK have a relatively better life than the citizens as in they have access to 24/7 internet (although even that is monitored to a certain extent), electricity, restaurants and more.

However, for the most part, the life of diplomats is pretty isolated as according to certain sources they are not allowed to really interact much with the nationals there and even their mission’s local employees have the possibility of being spies.

They are also restricted in a physical sense that they usually remain within the compounds allocated to them and interact with other diplomats for the most part.

But Ms. Kasturia has been quite busy by making visits to the Pyongyang University of Foreign Studies in November of 2017 and even donated some teaching materials to the university.

Another incident worth mentioning would be when Ms. Kasturia helped a blogger and his family visiting the DPRK as tourists last year and their flight was grounded at the Pyongyang Airport for more than 11 hours. Even after the weather cleared up and there was no sign of the boarding to start, the blogger called up the Embassy and instantly Ms. Kasturia and Mr. Jyotirmoy Datta arrived at the airport. They checked to see if everything was fine with the family and even stayed with them until they finally boarded the flight.

The above account clearly says how the Indian Ambassador to North Korea went out of her to do her duty.