Thinkium is an all-around public blockchain network, which achieves unlimited scalability at a linear cost by running through a multi-layer multi-chain structure and integrating Layer1 + Layer2 technologies. It has attracted a lot of community and media attention recently.

Data node – responsible for the storage of all data in its chain.

Consensus node – responsible for its chain of operations, consensus packaging out of the block.

In a public chain system, consensus nodes are randomly assigned each time they participate, and they are constantly re-selected over time. The nodes in the wallet are divided into “mine pool node” and “consensus node” according to the mode of different operating nodes.

The nodes running process of Thinkium public chain is as follows: 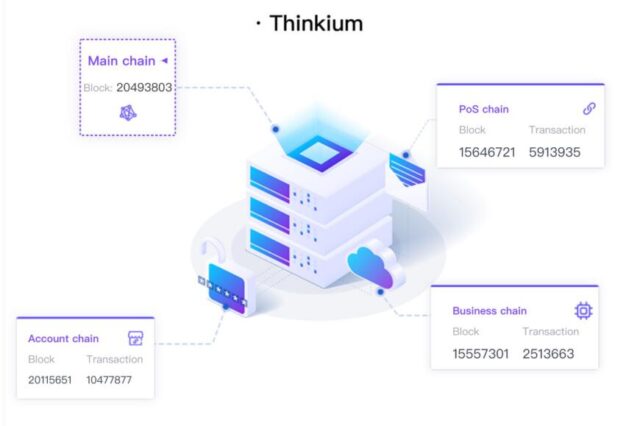 Firstly, according to the Thinkium public chain ecological application requirements, the system will deploy the required number of chains. (Currently there are main chain, account chain, POS chain and business chain as follows)

Secondly, during the initial deployment of each chain, data nodes need to be built to store all the data of the chain and synchronize the relevant data to the consensus nodes selected in each round of the chain in time.

Thirdly, consensus nodes are randomly selected to different chains through a random algorithm.

Such elections are held every once in a while.

In general, Thinkium public chain can dynamically increase or decrease the number of chains according to the actual needs of ecological applications, which can effectively solve the scalability problem of public chain.

The data nodes in each chain work continuously and stably in this chain, and are responsible for data storage and communication. They are rewarded by TKM issued by the system, but they do not participate in consensus block.

In this way, it becomes uncertain whether each consensus node will participate in the chain work in the next round of election. Because the consensus node may or will not be selected and will continue to stay in the “candidate area”. This can effectively solve the problem of decentralization and security.

In addition, the Thinkium Community Alliance advocates free and equal communication, openness and tolerance of all kinds of creative ideas.

Sports Chirali Sharma - July 22, 2021
There are and always have been disparities between men and women in practically every part of society. Whether it be family dynamics, power quantity,...

Breakfast Babble: Why I Wish For Another Lockdown

ED Originals Palak Dogra - July 18, 2021
Breakfast Babble: ED’s own little space on the interwebs where we gather to discuss ideas and get pumped up for the day. We judge...

Santaan, Startup Based In Tier-2 City Of Bhubaneswar Informs And Provides...