For a few days, an online fight between singers Sonu Nigam and Sona Mohapatra has been doing the rounds of social media.

It all started around December 19th, when Sonu Nigam at the Agenda Aaj Tak Summit said something along the lines of how he wished he was from Pakistan so then he would be getting offers from the Indian music industry.

At the summit, he said, “Sometimes, I feel as if it would have been better if I were from Pakistan. At least I would get offers from India,” and went on to compare the unfair treatment between Indian and Pakistani artists that are given out in the country.

He added “Nowadays, singers have to pay music companies for shows. If we don’t shell out the money, they will play songs sung by other singers and highlight them. Then, they will take money from them,” and also stated that, “Why single out Indian singers? They don’t do the same with Pakistani singers. Atif Aslam is a very close friend of mine. He is never asked to pay to sing at shows, neither is Rahat Fateh Ali Khan.”

Nigam got a lot of backlash for these comments and one of them came from Sona Mohapatra, perhaps best known for the Ambarsariya song from the movie Fukrey.

From 19th December till now, 24th December their feud or online debate has been a continuous cycle of either accusations or lashing out at something the other said.

Let us take a look at how strangely both the artists are behaving:

Sona started from 19th December only when she tweeted out: 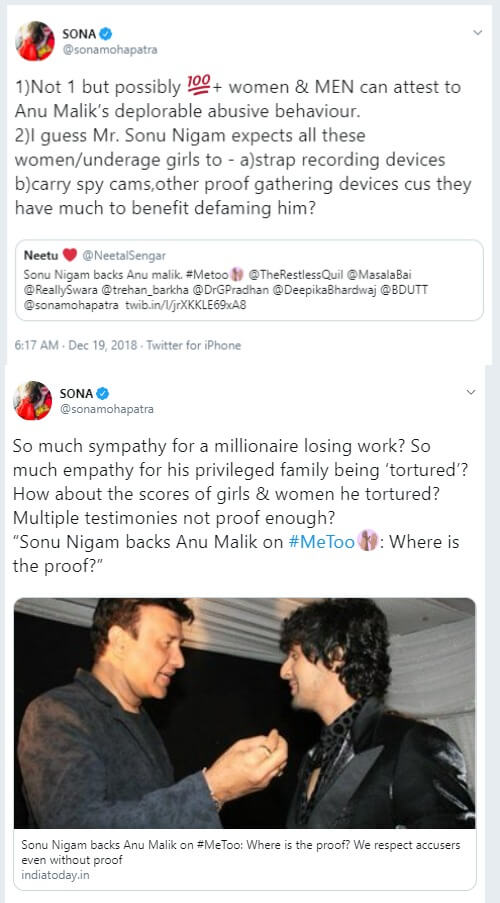 This was in reference to Sonu Nigam’s defence of the sexual harassment allegations against music producer Anu Malik.

At the same event, Sonu Nigam said that:

“If you say, ‘Anu Malik met me this morning’, that’s fine. You accused him without any proof; let’s accept that too. Had he (Anu Malik) wanted to say anything, he could have said a lot. But he did not. If I say that you misbehaved with me, you will ask me for proof. But there’s no proof, right? Despite that, people are respecting the accusers, who are tarnishing Anu Malik’s name. But how can you ban him? How can you snatch his bread and butter? How can you torture his family?”

and continued that, “Who has given us the right to be the judiciary of someone else’s life? Or you provide concrete proof. I have two sisters. I stand for them. But that does not mean that you put a stop to someone’s work. How can that happen?”

Alright, understandable to an extent, while I don’t think there is anything wrong to ask for proof, the way Sonu said it all really did sound very strange. The emphasis on proof he kept asking for and turning it on the accusers themselves of how they could potentially be ruining a good man and his family is just an insult to the movement.

So, Mohapatra’s anger is not entirely unjustified, but it was the later rants she went on about his Pakistani artists comment and subsequent Facebook post, that were seriously weird.

After news came out of his statement, Mohapatra tweeted out that:

Even this was granted since his statement was bizarre and even after his clarification, that he meant not just Pakistan but artists from abroad who don’t have to pay as much as Indian artists in order to get work, it did not make much sense.

But things spiralled when she kept on going about this issue.

After that, her Twitter feed has been a constant retweeting and replying parade of this whole issue where she retweeted her old tweets, and shared articles and comments written around this situation, particularly those praising her stand.

After that, it was her apparent problem that Sonu Nigam in his Facebook post called her as ‘the wife of someone who I consider very close to me’.

She tweeted out that:

To be honest, I don’t understand what the problem with the term really is, it is not offensive as much as it is being built out to be.

In a later interview reported by Hindustan Times, Sonu Nigam in reference to using this term said that,

“If I know a person, a wife through a friend, that’s how I will refer to her na? Sona is not my friend. Ram Sampath is my soul brother. I know her through Ram. So I called her my friend’s wife. She cannot call me Madhu’s husband or Neevan’s father, because she is not close to either of them. I didn’t know that wife was a wrong word. I found out today it’s a shameful word. We were in the wrong school. Our parents taught us wrong. Humari ma to galat thi. Humare papa ki wife banke galti kar di unhone.”

And really, there is nothing wrong with using this term, probably since he did not want to use her name outright and bring it to her fans attention. It is a common social media move to not use someone’s name if you don’t want hate comments and more from that person’s fans.

Also, he is correct, he said that he is not really close to Sona herself, and his connection to her is through her husband, so what is the harm if he used the term ‘wife’ here?

It is not like he used it in a derogatory way, such as asked his friend to ‘control his woman’ or ‘get your wife in line’ or something along those lines. So why the unnecessary anger over a very innocent term? 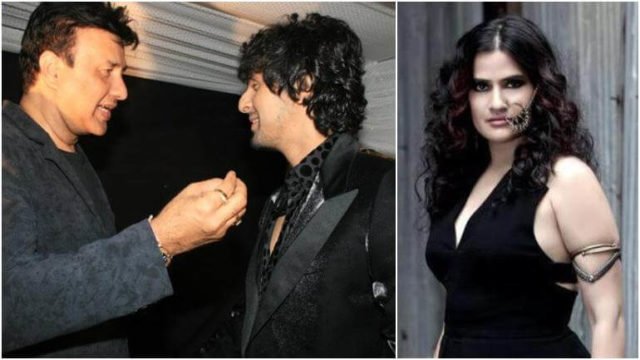 Read More: Preity Zinta Wishing She Had A #MeToo Moment Makes Her Interview The Stupidest Video To Watch Today

Sonu Nigam had talked about all the backlash he got and Mohapatra’s comments too in an interview recently.

In an interview Nigam reportedly said that,

“You have said Kailash Kher can’t do a show. Fair enough. But then you are writing letters to Arvind Kejriwal. Why is she doing that? Who gives her the right to decide that a singer cannot do a show? Then what’s the difference between you and Islamic terrorists? This is a kind of terrorism that you are deciding who works with whom?”

This was referring to Sona Mohapatra writing a letter to Delhi CM Arvind Kejriwal and his party AAP for not doing anything to stop Kailash Kher’s public performances at some big festival, especially in light of the sexual harassment accusation he was facing.

But seriously? Writing a letter has now become synonymous with being a terrorist? I don’t know what kind of world Nigam is living in, but in ours, terrorists do not really take the time to write letters, they just create massive destruction and loss of life and property.

How is writing one letter to point out how detrimental it can be to still keep the performance of a man who has been accused by various women in a festival meant for the masses be something similar to terrorism?

In the same interview, he also said that, “and in the case where there’s no evidence, you want that person to not get any job in future? How is that justified? What kind of world are we living in? Thik hai, you abuse that person, you ignore them and everything, but you cannot take away his right to earn a living, can you?”

His point of social judgement and how the common public itself is becoming judge, jury, and executioner of someone, based on unverified accusations ready to character assassinate them is not entirely wrong.

It is a very real problem that we are seeing in today’s time, but his later comments are very strange. Of course, the accused should suffer some consequence of their actions. Abusing and ignoring worked when we were kids and our friend would take away the ball, not letting everyone else play with it.

In a sexual harassment situation, there have to be some grave punishments to the daily life of the person, which will eventually create the fear to not do such acts in the first place.

While it is alright to put your case forward, the use of the word ‘vomiting’ was not needed especially when you are not outright naming that person.

This is really sad to see two such known and respectable artists airing out their fight like this, because it is a fight, not really a debate. This back and forth is just undermining any respect for them since in a debate there needs to be some decorum and dignity, which neither of the sides are showing.

Each is just trying to lash out at the other and prove how they are right and the other wrong.

Sonu Nigam Comments On Wanting To Be A Pakistani: Have We Failed The Singer?