IN CHINA, property prices can keep going up forever. At least, that is what optimists seem to think. They point out that the country is undergoing the largest urbanisation in history. The throngs of migrants from the countryside all need homes, the argument runs. China’s swelling middle classes, many of whom live in shoddy 1980s housing, are also eagerly moving to fancier flats or McMansions. The result has been a spectacular property boom over the past decade. 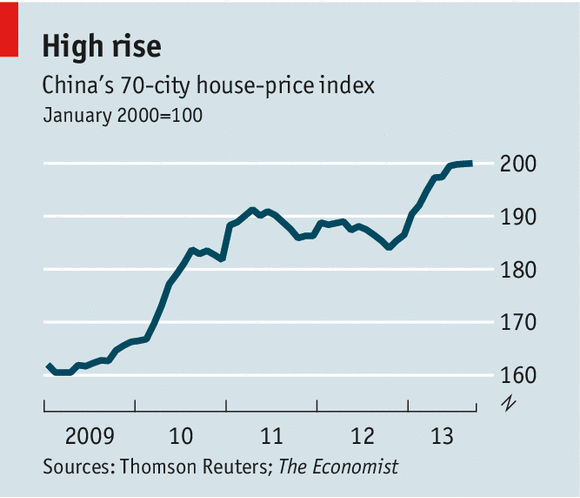 At first glance, it seems the good times are still rolling (see chart). During the first three quarters of this year residential sales shot up by 35% versus the same period a year ago. Prices for new homes rose year-on-year in September in 69 of the 70 biggest cities. In Shanghai, Shenzhen and Beijing pricesjumped by more than 20%; in slightly smaller cities, such as Nanjing and Xiamen, they rose by around 15%.

Despite these signs of rude health, even some of China’s biggest property moguls appear to be growing uneasy. Wang Shi, the chairman of China Vanke, the country’s largest residential-property firm by volume, has called the market a bubble. Wang Jianlin, the country’s richest man and the chairman of Dalian Wanda, a property giant turned entertainment firm, acknowledges that parts of the country may be experiencing a property bubble, though he thinks it “controllable”. Li Ka-Shing, a Hong Kong tycoon who has long been bullish on China, has started to sell his mainland holdings.

The problem is not the wealthiest cities with the most vertiginous valuations. Indeed, in those markets prices may yet go higher. People from all over China buy trophy apartments in Shanghai and Beijing, making their markets as resilient as those of Manhattan and central London. In fact, policies aimed at squelching speculation may be artificially suppressing demand in those places.

Shanghai and Shenzhen recently followed Beijing’s lead by requiring that buyers of second homes put up 70% of the purchase price as a deposit. In Beijing, the sale of a second home incurs a 20% capital-gains tax. (This is supposedly a nationwide policy, but is not always enforced in other cities.) Couples with two homes are reportedly divorcing to avoid the tax, since once officially single they can each own a primary residence, and thus sell either one without penalty.

Demand does not look so robust, however, in places like Yingkou Coastal Industrial Base, innorth-eastern China. This development was promoted by the local government as a future hub of economic activity, but the future has not yet arrived. There are rows of empty buildings and few people on the streets. Property salesmen claim that big companies ranging from Coca-Cola to PetroChina are building factories nearby. But even Xinhua, an official media outlet, is sceptical: except for street lamps and the occasional passing vehicle, it reported recently, “at night the base was completely dark.”

Many property developments outside the big cities appear to be ghost towns of this sort. Moody’s, a credit-rating agency, laments that a large and rising share of new supply has gone to smaller cities. People’s Daily, another official organ, recently fulminated against the “huge waste of resources” such construction represents. Nonetheless, by the government’s count, 144 cities in 12 provinces are planning 200 new towns. 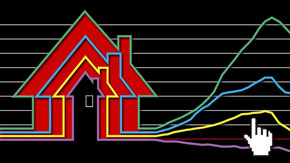 As it is, the stock of new housing is soaring. GaveKal, a consultancy, calculates that after a decade of undersupply, China’s housing market is now shifting to “structural oversupply”. Its boffins point out that housing completions rose to 1.1 billion square metres last year, nearly double the figure seen before 2008. AllianceBernstein, a fund manager, also worries that the pace of building is outstripping sales. This, it reckons, has led to a growing overhang of completed but unsold homes.

Worse, sales figures may be misleading. Anne Stevenson-Yang of J Capital, a research firm, argues that a substantial share of new homes is being purchased not by individuals but by local governments, banks and state-owned enterprises. How many of these are ultimately sold on to ordinary citizens, and at what discount, is unknown.

Another concern arises from the property developers themselves. They have been taking on massive quantities of debt. Analysts at Bernstein think the industry is at its most indebted for a decade. That makes it “highly vulnerable” to a downturn. If the economy hits a rough patch and sales slow, the most desperate could start a vicious cycle of price cuts.

Then there is the question of where China’s property magnates choose to put their money. Hardly a week goes by without an overseas investment or trophy acquisition by a big Chinese developer. Dalian Wanda is diversifying both by industry (its boss wants to be a movie mogul and is building what he claims will be the world’s biggest film studio in the Chinese port city of Qingdao) and geography (it is building a hotel

complex on the South Bank of the River Thames in London).

After decades as an entirely domestic firm, Vanke now hEven big developers and state-owned newspapers are beginning to express fears of a property bubble as developments in Singapore, Hong Kong and America; Mr Wang confides that Britain will be next. He says he wants a fifth of his firm’s investments to be outside China soon. Fosun International, a diversified Chinese conglomerate with big property holdings, last month acquired One Chase Manhattan Plaza, a grand building near Wall Street in New York. Zhang Xin, one of the co-founders of SOHO China, another property giant, bought a stake in New York’s GM building earlier this year; this month she reportedly outbid Brad Pitt and Leonardo di Caprio to secure a $26m townhouse on the Upper East Side in Manhattan.

Even the pessimists are not necessarily predicting imminent disaster. Ms Stevenson-Yang, for one, says that the bubble could take as much as five years to burst, with prices to drop by 40% from current levels. The more sanguine, meanwhile, insist that inflated local markets in smaller cities can burst without puncturing the national economy. But it must say something that those who have benefited most from China’s property boom are now looking elsewhere for opportunity.

Credits to: The Economist From the print edition: Finance and economics 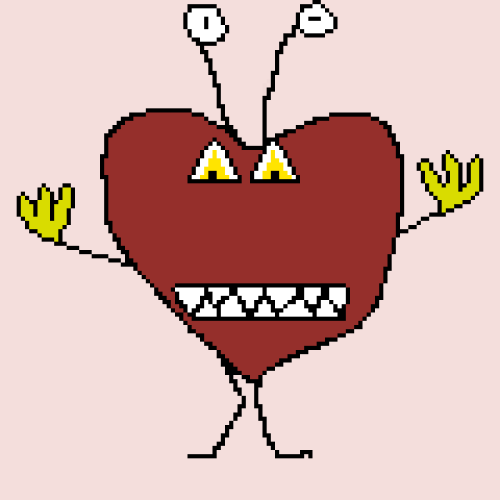