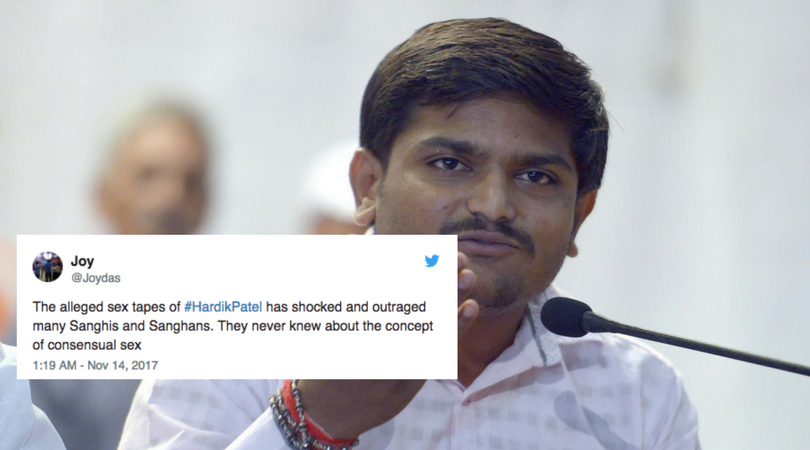 So guys, listen, I’ll tell you a piece of news:

Hardik Patel did something, something which half of Indians don’t get. He had sex.

Yes, whoa, damn. How did he have the audacity to pull out his penis and engage in sexual intercourse with a woman who has consented to it. That woman might be someone’s behen or beti.

Did he seek permission from her parents to lay her down and do nasty stuff with her? There was no marriage. There should have been a marriage. The girl was not wearing a mangalsutra, neither was there any sindoor on her forehead.

On a serious note, the good marketing people in ruling government’s party thought that releasing a sex-tape of a mid twenty-year political figure is a strategy which would help them sweep the elections. To their surprise, the twenty-something-year-old Hardik Patel reacted maturely. He said, “So, what?”

I am yet to marry and I am not impotent.

Only in India can you find people who believe that having copulation before marriage is something immoral and illegal, although it is not. The Congress reacted quite sharply to the attack on Hardik Patel’s sex affair and termed right-wing elements sexually frustrated.

To quote Dr. Sambit Patra “Surely, in political life, one has to be aware that when people’s aspirations aren’t being fulfilled, they resort to this kind of thing. And Hardik appears to be close to the Congress.” Yes, Sambit is dumber than the dumbest student in your class.

I do not support Hardik Patel’s politics. What I support is the idea of two or more adults having consensual sexual intercourse in private. That is it. That is the crux of my entire argument.

But the most mature response was from this person:

#GujaratSexScandal | I don't know whether Mr #HardikPatel has filed an FIR. I'm sure the Police department will act: Dr Sambit Patra, BJP pic.twitter.com/GmL8JogTkf

Arnab Goswami organized an hour-long primetime debate to discuss the “sex-scandal” of Hardik Patel, with fancy hashtags, of course.

Truly a patriot, and a respected journalist.

Related: My Newborns Survived Due To The National Anthem Being Played On Loop: Swaraj Columnist’s Funny AF Justification

Here are a few more lines to convince you why the Indian society needs to talk more about sex and consent. We, as a society, get really uncomfortable when naming and shaming of persons accused of sexual misconduct is done. But on the other hand, we are not okay with two consenting adults having sex. This is a conditioned hypocrisy. The urban, enlightened and the liberal young population are slowly separating from such outdated notions.

But BJP isn’t. They think that the old tactics of releasing a sex tape and naming it “sex-scandal” would help them gain votes. Clearly, benefits of GST and demonetization are falling short to convince people of their party.

The alleged sex tapes of #HardikPatel has shocked and outraged many Sanghis and Sanghans. They never knew about the concept of consensual sex

Also, it is being alleged that the sex tape is being played on Gujarat TV channels. So, I guess Gujarat isn’t a dry state anymore.