“I am against feminism.”

This statement would surely make you curious too, while we are still trying to empower women to get to an equal pedestal even for basic things.

A viral video by Divyangna Trivedi titled “I am against feminism” has been receiving a lot of opposition from people.

On 15th May, Divyangna Trivedi posted an 8-minute long video on her IGTV page with the title ‘I am against feminism’.

Well,the topic might trigger you right away but please listen to the facts before you react. My intention is to resolve the differences which have occurred due to this vague concept called feminism which is so fake today. If your concept was just about uplifting the weaker and suppressed I would have accepted your words and concept under this rubric but, The reality is very different from what you say you promote on paper. Please stop being dogmatic girls, if you respect everyone only then you’ll be respected by everyone. I am in no way letting the male criminals go Scott free but a lot of people have already spoken about that so I chose to voice an underrated fact. Please live in harmony, don’t expect to get respect just because you’re of a particular gender. Earn what you want Learn to take things logically and practically I am not against females but females bullying men under this fake agenda which is no more about equality. . REGARDS DIVYANGNA TRIVEDI . #feminismo #antifeminist #newvideo #equality #behaveyourself #justiceformanavsingh #harmony #respect#earnrespect#boislockerroom #girlslockerroom #fitnessmotivation #bookstagram #fakeallegations #against#views #peace

When she first posted the video she claimed that she would be open to criticism that are logical but her statement does not hold up at all.

– she says at the start of her video.

She also claims that such “feminists” are the ones responsible for the gender divide and now are suppressing the male gender in the name of feminism;

She then went on to say that,

In most parts of the country, women don’t even get the basic respect of a human being, so where were the “betas” who were taught to respect women when women are being cat-called or harassed?

She even made comments about how ‘men being raped’ or ‘men facing domestic violence’ aren’t given a voice and men are being suppressed.

To make her point she compared the “Manav case” to the “Nirbhaya case”. Yes, men do get assaulted and that needs to be recognized too but dismissing the massive violence and rape cases against women that still occur in huge numbers daily is no way to recognize men’s rights.

She ended the video by calling the concept tainted and non-sensical and said,

Humanism and Feminism are two completely different ideologies and promoting feminism does not mean that you can’t propagate humanism.

Read More: In Pics: What Is Protofeminism And Who Are The Women Responsible For This Philosophical Tradition?

What were the reactions to her comments?

It didn’t take long before a good number of videos were made replying to Divyangna’s initial statement.

Kusha Kapila, a popular social media personality, bashed her statements but then deleted her video saying that she does not want to give her any more attention than she already has.

A few comments on her own video rejecting her claim received more than 350 likes.

Another video made by a girl named Anupreet Kaur (@damnkudi on Instagram) tried explaining every point word by word giving rational examples for every statement that Divyangna made, only to be given the same answer again and again. 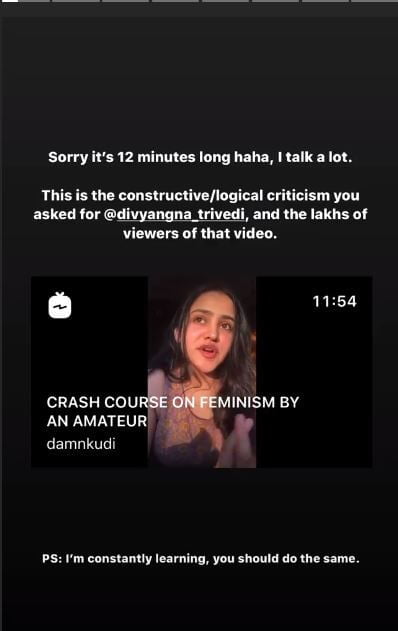 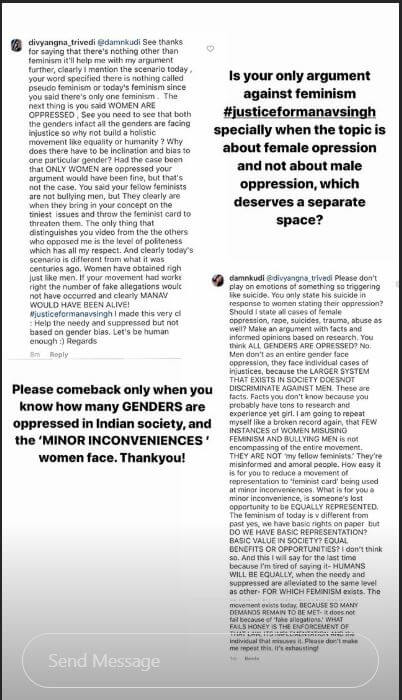 The video also received support from a few people even though social media was filled with replies against her anti-feminist views.

Before long Divyangna made another video giving her response to all the arguments feminists made against her perspective, which enraged even more people.

A petition “to get Divyangna Trivedi’s parents to confiscate her phone” was started against her by a guy named Mehul Arora.

Many people in the comment section complained that they are being blocked and their comments are being deleted by her just because they don’t agree with her.

Even one of my friends got blocked by Divyangna when she tried to give her opinion on her recent post where she is providing “proof” for matriarchy. Her comments received more than 80 likes in less than 2 hours. 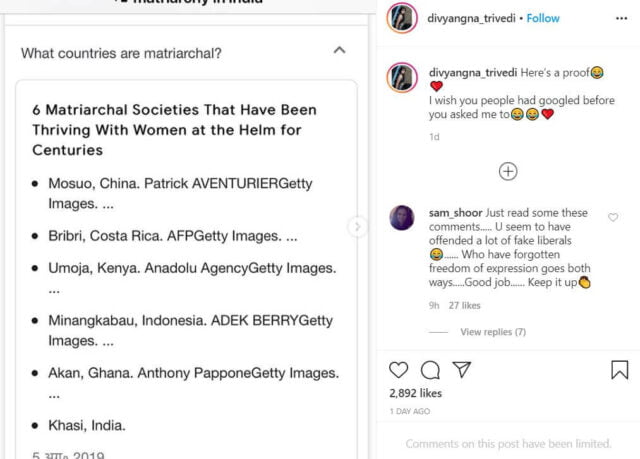 She pointed out that Divyangna’s data contradicts her claim of equality and the widespread patriarchy highlights the very need of feminism.

She even convinced one of the guys in the comment section based on her facts and arguments, but Divyangna deleted it all showing how she isn’t open to any sort of criticism towards her views.

The women’s development cell of Hindu College posted a message “for the girl against feminism” trying to explain to her the positive side of feminism and requesting her to understand their point of view as well.

An Open letter from WDC Hindu College to 'The Girl Who Is Against Feminism' This letter conveys our sentiments as a Cell on your recent video- where you spoke about why you are against the Feminist movement. @divyangna_trivedi We write this letter with utmost regard and best intentions, hope it reaches you with the same. Love WDC 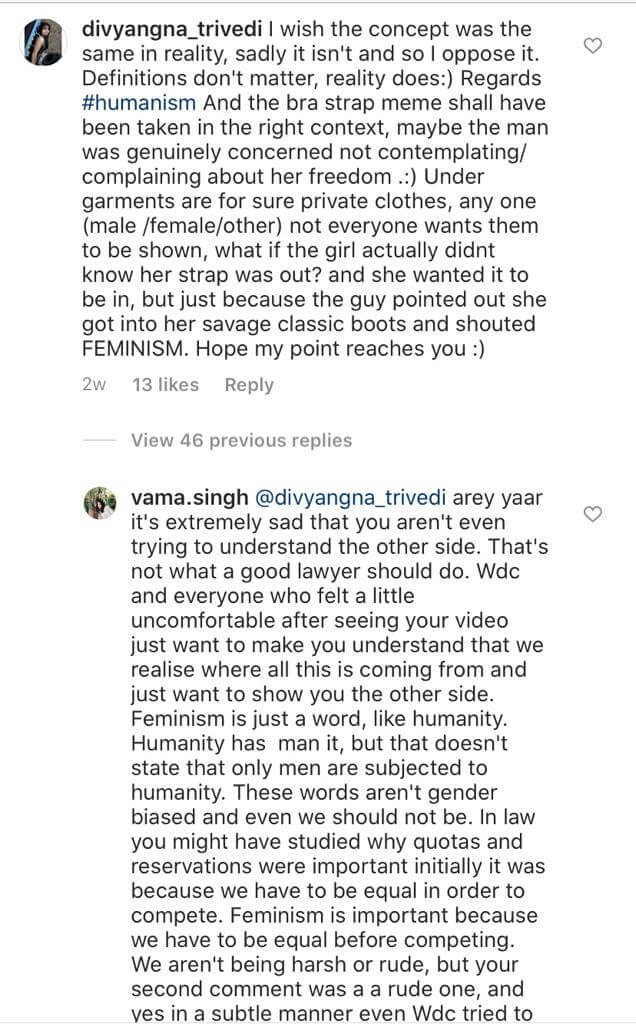 A point that many feminists have raised is that; some females might’ve got the environment and opportunities to achieve great lengths in their lives but many still struggle to get through a day where they are not being violated.

Just because a few females managed to get equal political rights it does not undo the years of patriarchal oppression females have been subjected to and are still having to suffer through.

Feminism has been evolving over time and constantly improving to include more and more issues in its domain. Feminism has different meanings for different people.

After thousands of years of repression and patriarchy Feminism seeks to empower women to stand on an equal platform with men before they compete. The movement has grown over time and is not just about attaining equal political rights on paper but about outgrowing the social stereotypes too.

In today’s scenario where everyone is entitled to an opinion, any message does not take long to get viral. But who will be held accountable if one opinion germinates the seeds of hate or starts a verbal take down online?

Do you support this girl’s claim that today’s feminism is tainted and completely flawed or do you think it is the process of evolution to be an even bigger movement?