India is a country where religious practices and beliefs remain unjustified in the name of God and salvation. Religious fanatics are intolerant who rely on brainwashing to gain more control floating caste-based hierarchy, discrimination, gender bias and other irrational acts.

Being a rationalist in India is difficult and life-threatening considering the murder of rationalism by religious terrorists. But you can’t stop opposing atrocities committed in the name of religion once you are a rationalist.

On a similar note, a rationalist movement is slowly gaining popularity in Kerala with followers worshipping a chaddi-clad mouse ridiculing the absurdity of blind religious practices. A Religion For Non-Religious People

Dinkoism is a religion that emerged through the efforts of independent social welfare groups in Kerala challenging superstition and religious orthodoxy. The followers of Dinkoism worship Dinkan, a comic book based mouse character in the now-defunct Malayalam children’s magazine Balamangalam.

Eliciting fun from the faithful and fear among the rest, Dinkoism is making waves by exposing the prejudices and practices of traditional religions. The devotees mainly comprise of atheists, liberals, and agnostics with their number soaring through dedicated Facebook pages and Twitter handles.

Before becoming a counter-god for lampooning established deities, Dinkan was set by the comic artists Baby and Somasekharan in a fictionalized forest of Pankila where the animals in distress would call upon the mouse with magical powers to save them. The famed mouse became a superhero when an alien abducted and experimented on him. 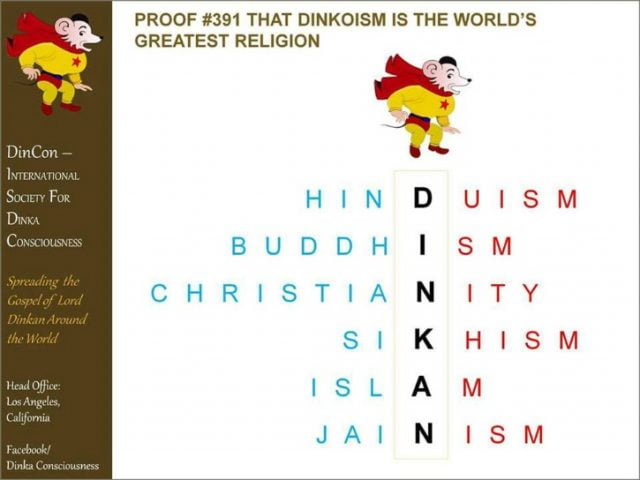 You Can Also Read: Kunal Kamra’s Latest Podcast Is A Hilarious Yet Constructive Take On The Degrading State Of Indian Media

This mock religion that was established in 2008 by a group of rationalists in Kerala who were upset with the rising intolerance of organized religions backed by political parties losing the sense of discretion.

Dinkoism is rigged with the fittings of any other religion it makes fun of – a holy book, priests, faith-healers, symbols and devotional songs.

Except there are no temples, masjids or churches. Instead, the congregation gathers to actively discuss and debate in Dinkalayams or the abode of Dinkan which can be any place.

More To The Dinkoist Movement Than One Thinks?

The Dinkoist belief states that the world was formed when Lord Dinkan ate a Cassava. Replacing the Big Bang Theory with Lord Dinkan’s Big Laughter Theory, his laugh is supposed to have created space and time.

The video below by Amy Watson from the US explains why Dinkoism is the most women-friendly religion in the world using humor to promote its message.

Dinkoism finds its relevance in today’s world where religious beliefs have been shaken to the core with conflicts and strife exposing the dark and gory details.

A faith-healing camp in Kochi by Dinkoists sparked off protests from the Christians where healing sessions were performed on devotees by Dinkoist ‘evangelists’. The Dinkoists stuck to their mock protests stating that it was a parody of the Christian practice of spiritual and physical healing.

Another grand gathering was criticized by hardline Hindus and Muslims raising objections to ‘Stoning the Jackfruit’ ceremony. While Muslims protested the parody of the Stoning of the Devil during Hajj, the Hindus took offense to the portrayal of Lord Dinkan as a spoof of Hanuman or Lord Ganesha.

Like other faithful religions that spread terror and chaos across the globe, the Dinkoists can also get offended if their Lord is denigrated or belittled using arguments and humor as their effective weapons.

The parody religion has been making headlines since their protests against Professor Dinkan, a Malayalam film starring actor Dileep alleging that the film hurt their sentiments under the banner of Mooshikasena or the Rat Army.

Is Dinkoism the need of the hour?

The world’s first crowdsourced religion is making sense by going a step above atheism. With no formal process, Dinkoism welcomes everyone without exercising any authority.

With no ghar-vapsi or conversion practices, Dinkan is a laughable serious business to the devotees.

Demanding a minority status, subsidized or free lands and the right to run educational institutions, Dinkoists could see a miracle becoming a registered religion in a couple years.

In an interview by Scroll.in, this is what the Indian Administrative officer from Kozhikode, Prashant Nair, said about Dinkoism;

“Dinkoism is a religion where you learn to take things lightly and become tolerant of things that you don’t appreciate otherwise. Dinkoists use humor to send the message. Humour is something that everybody appreciates. Therefore, it makes sense to promote this religion.”