In December 2020, students took to Twitter to campaign against SSC (Staff Selection Commission) alleging the use of unfair means in the Delhi Police Constable Recruitment Exam calling it “Delhi Police Exam Scam”.

They have been demanding the cancellation of the same ever since.

They have been protesting online about the same and #Delhi_Police_Exam_Scam has been trending all over Twitter.

The Delhi Police Exam is a computer-based examination (CBE) for the position of a constable in Delhi Police. It is an objective-type paper of 100 marks.

3 students were arrested based on evidence found for practising unfair means in the exam. The association of a “solver-gang” has also been suspected.

How Was The “Gang” Caught?

Noida Police got hold of a “gang” that supplied professional scribes who gave the exam on behalf of the examinee for a certain pay. Students have hoarded social media with tweets demanding cancellation of the above-said exam and are requesting a re-examination.

The candidates complained about the terrible pre-checking as well as the blatant cheating happening in their examination centres. Ranging from unfair aid from laboratory assistants to fake candidates giving the exam, the discrepancies seem never-ending.

“A team from Sector 58 police station rushed to the examination site, and the three candidates were taken into custody. Upon questioning, they revealed details of a racket in which several other people were involved,” said Luv Kumar, Joint Commissioner of Police.

What Is The Authority’s Take?

Interestingly, there is absolutely no clarification or comment from the SSC which has not only given an oust to the subtle suspicion, but also led to students blaming the authorities to have been involved somehow.

The blame is not ungrounded since among the 9 people held in the “solver gang”, 2 were police constables themselves.

The police also said that around 100 candidates have already availed of the gang’s services throughout the previous examinations conducted. All are currently being tracked down. The fee was approximate Rs. 10,00,000 per candidate.

That being said, official statements hold a superior value when it comes to controversies or mass grievances. Therefore, no statement about the reconduct or cancellation from the Delhi Police has caused a great deal of disappointment among the students.

The cancellation of the exam seems like an ideal path and the re-examination needs to be conducted for a just and fair trial.

What Has Twitterati Said? 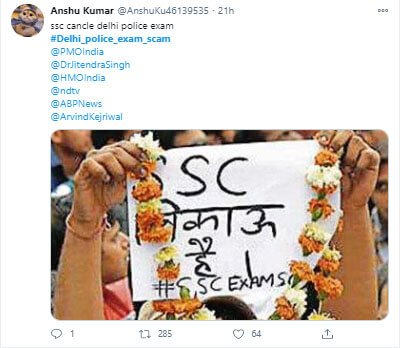 A Lot Of Sweat And Shikanji: My Experience Writing The Civil Services Prelims Examination By UPSC