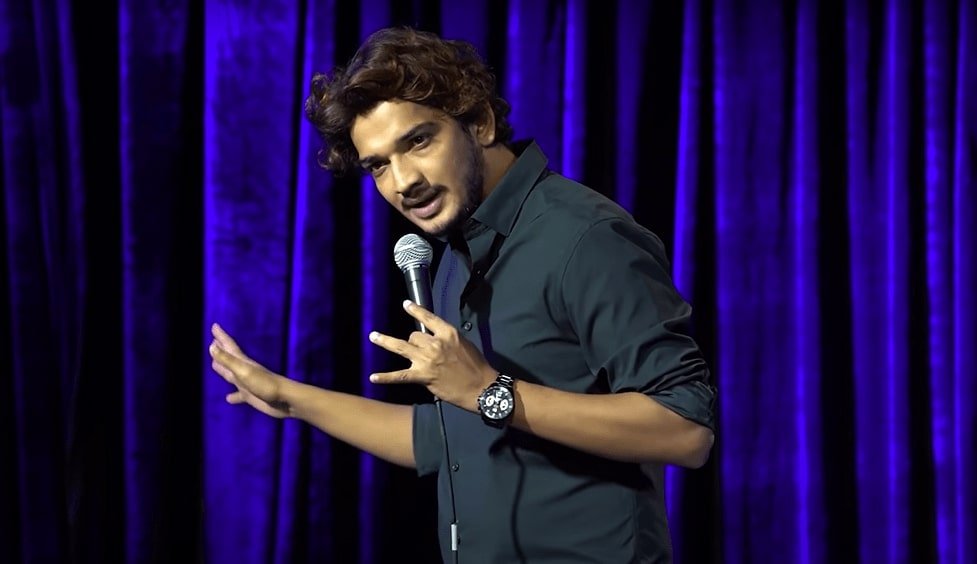 Comedy is a murky sphere in India. It can lead to a barrage of debacles with an entire crowd of fundamentalists baying for blood and rattling at gates. Comedians have been getting the sharp end of the stick because they made a few people laugh at the expense of a certain celebrity or a certain community.

Unfortunately, the fact that comedy exists through such turmoil is a testament to the fact that the Indian populace is sparsely tolerant.

Munawar Faruqui became a target of this very same witch hunt as he tried to spark his comedy career with a newfound spark and yet it was not to be. Hindu fundamentalist groups began hounding venue upon venue hoping for Faruqui’s head upon a pike making it nigh impossible for the comedian to initiate a show. All for a joke that was never cracked.

Why Is Munawar Faruqui Ending His Comedy Career?

Imagining a person losing out on everything that they had worked for until now, fall apart into a billion little pieces is crushing, to say the least. That is exactly how it all came crumbling down for Munawar Faruqui.

Fairly green in the world of comedy, he had prepared for his first tour’s concluding shows which had already been a massive hit. If only he would have known that a certain YouTube video posted by him aeons ago would be used as the basis to have him arrested. Thus, with the offended Hindu fundamentalist group, Hind Rakshak, in tow, Faruqui was arrested on the pretext of several sections of the Indian Penal Code, including, 295 A. He had been tagged as a person who exists in the country only to cause turmoil in the societal fabric. It was already the beginning of the end.

Also Read: Is India Ready For Jokes On Politics?

An Artist’s Defeat: How It All Spiralled Down

After being bailed out after months upon months of judicial discourse, he wanted to get back to comedy, his safe space and his harbor. This began a chapter of his life that only consorted and molded itself into a space of loneliness and fear. He had had shows lined up in quite a few states in India.

However, a development took place that seemed as strange as it was uncalled for as scores upon scores of right-wing Hindu extremists began threatening the comedian alongside the organizer upon the declaration of a Goa show.

The organizers, LVC Comedy Club, had to cancel two sold-out shows owing to numerous threats from such extremist groups. It did not limit itself to giving death threats or vandalism threats but more obtusely, it was a threat of them committing mass self-immolation to protest against Faruqui.

About 500 people had threatened to burn themselves on fire if the show took place. In response to the threat, the organizers issued a statement canceling the shows;

“Yep, that’s not a joke, that’s an actual conversation I had today, along with signed documents. Post talking to the local police, there’s not much that can be done to avoid an incident of that nature. So this show won’t be happening on Monday. It was two sold-out shows, but well.”

It is but one instance of a show being canceled for the comedian. Unfortunately, the buck did not stop at that as he, most recently, had his shows in Bengaluru canceled as well. The show which was to be held on the 28th of November (Sunday) was canceled.

The spiral continued. Fundamentalists had begun issuing their threats and the possibility of them assaulting the people present at the auditorium is too real to discount. The police thus sent a letter to the organizers stating;

“There is credible information that several organizations are opposing this stand-up comedy show performed by Faruqui. This could create chaos and could disturb public peace and harmony which may further lead to law and order problems. Therefore it is suggested that you should cancel Faruqui’s comedy show.”

Faruqui had now become a controversial figure and it was all because of a joke he didn’t crack. To put matters into perspective, the comedian lost out on 12 shows (at least) in a space of 2 months.

As many pleaded with him to not leave comedy as his post’s comment section flooded with words of encouragement and aplomb, it all fell upon deaf ears. Music composer, Mayur Jumani, said, “Nope. You’re not quitting. We won’t let you.” Yet, these words were bereft of meaning as his comedy career would only be met with the brickbats of the fundamentalists and that is a risk not worth taking.

His farewell was one of the tears and broken dreams as he said a somber; 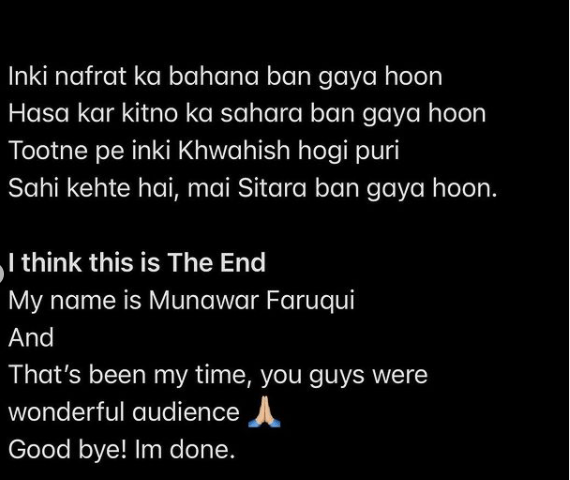 However, it is through these words that he successfully meted out his pain. He also exclaimed his grief concerning the cancellation of the Bengaluru show as it was meant to be a gigantic event as they had already sold 600 (approx) tickets.

Yet owing to the numerous threats received it never came to pass. As revealed by him, the proceeds of the show were to be given to charity in collaboration with social worker and actor, late Puneeth Rajkumar.

It is unfortunate to state that hostile, aggressive groups are still considered and condoned for every act of atrocity they commit but an individual who makes others laugh will bear the stamp of a domestic terrorist all their life. As Varun Grover stated;

“It doesn’t matter that [Munawar] didn’t even cross any pre-existing red line—they(system) can create new arbitrary red lines on the ground and arrest you for your thoughts.”

Unfortunately, that is exactly what’s happened.

This post is tagged under: Artistic freedom, do artists have freedom, what did munawar say, munawar granted bail, comedians jailed, no right to speech, right to expression, reign of terror for comedians, is it a crime to be funny, munawar faruqui, munawar faruqui leaves comedy, comedy, modi, Hindu extremism, right-wing terror, bjp, Hindu mahasabha