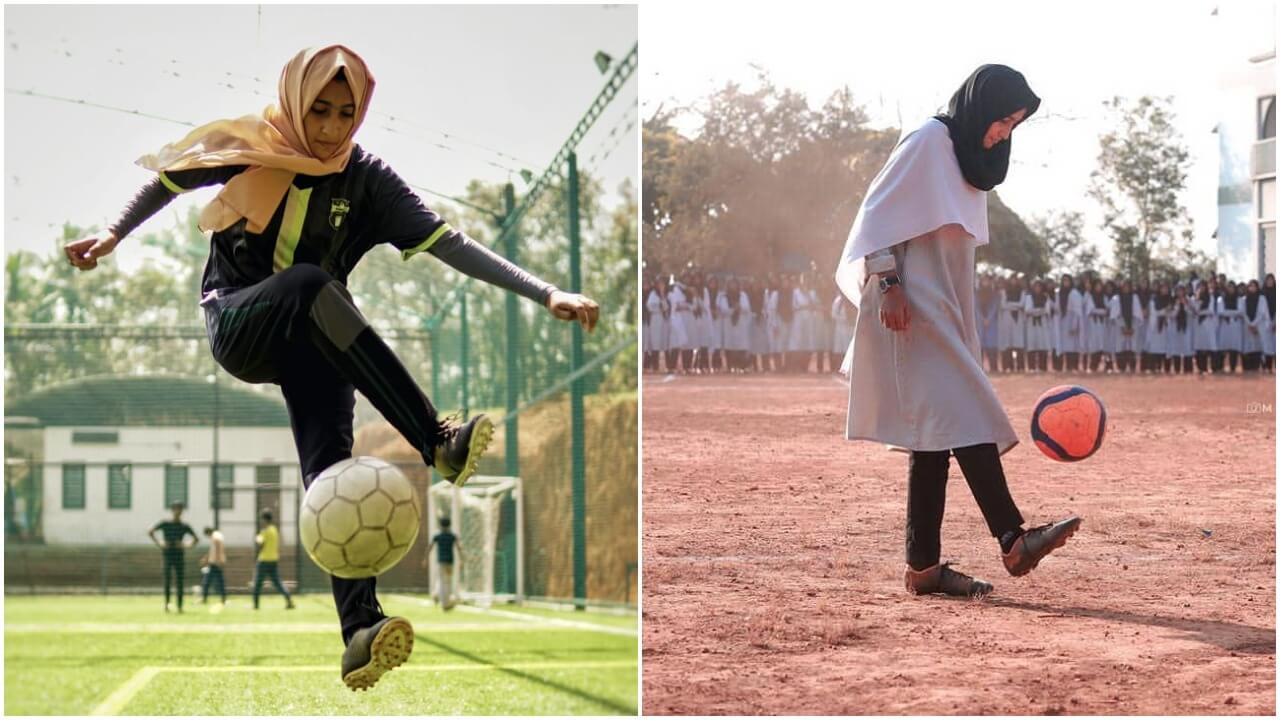 The sport of football is slowly rising in recognition in India. It took some time, but surely it is becoming a well-known sport in the country and is right behind cricket in terms of popularity.

As such, many schools and universities have started to form their own football clubs and teams, holding inter and intra competitions on both regional and national levels.

However, as always, girls are being left out of this game, something that a 12th-grade student in Kerala bore witness to first-hand.

Hadiya Hakeem, the 17-year-old student, though was not going to sit back and stay quiet and decided to prove that girls can be as amazing in football as any guy out there.

Who Is This Amazingly Talented Footballer?

Hadiya Hakeem, a 17-year student in Kerala, first caught the eye of many when a freestyle football video of her went viral early in the year.

Hakeem, who is completing her Class 12th at the Chendamangallur Higher Secondary School near Mukkam, a town in Kozhikode in the state of Kerala, is a big football fan and a really talented player herself.

She was earlier settled in Doha, Qatar and had moved to Kozhikode just around years ago with her family.

An avid football player, at her old school in Doha, Hakeem had been playing football at the mid-fielder position since Class 7th onwards. Apparently, she was even hoping to get selected for her high school girls’ team but her family returned to India in 2017.

It was not just the move that was difficult for her, but the biggest shock came to her when she found out there was no girls’ football team at her new school.

As told to News Minute, Hakeem said that “Kerala loves football. But if you look around here, there are only men playing the game. Local soccer clubs are all men’s clubs. In school, boys take over the field during physical education period, while the girls play badminton or sit idly waiting for the class bell to go off.”

Reports also state that Hakeem and her family could not even find any other girls club or coaching class for football in their neighbourhood in Mukkam.

This was quite difficult for Hadiya as not only her but her whole family are extremely into football. She has stated that “My entire family is into football. We love Barcelona (club) and Spain (team). My dad plays football. My older brother has now received a D licence from the All India Football Federation (AIFF) and plans to become a coach after completing his Architecture degree. My younger brother too plays football. I dreamt of being a professional player myself, but now it seems unlikely as there are no opportunities in the neighbourhood and I can’t travel as I am in Class 12.”

This was not enough to pull her away from the sport though, as Hadiya shifted to playing freestyle indoors and honing her skills on her own.

Her moment to shine and prove people wrong about any prejudice that women can’t play football came during her school’s annual Soccer Fest.

Apparently, her talent had been noticed by the boys in her batch and they encouraged her to request the administration to allow her to freestyle before the football cup tournament began.

Even after knowing that the tournament is only for boys, Hakeem still approached the school principal and suggested the idea.

Hakeem also noted that “I was encouraged by the boys in my class to ask the principal if I could show my freestyle skills. Thankfully, they allowed and I could perform for the soccer cup.”

Thankfully, her request was accepted and in January 2020, she was allowed to showcase her freestyle skills on the ground with the teams and audience all watching on.

A video of this was captured and once uploaded, it went viral. The video uploaded to Hakeem’s Instagram page alone has over 60,000 views to it.

Her ability to juggle the ball between her feet and even kicking it up in the air without dropping it or letting it touch the ground impressed many football enthusiasts.

Her teacher, Saleem N K even commented that “She has given goosebumps to all of us. Hadiya is a big motivation for not only students but also teachers.”

This resulted in her getting almost a celebrity status with many tournaments inviting her to inaugurate their football matches.

However, Hadiya has stated a reluctance with this status saying, “I don’t want to be reduced to a performer. I can actually play football. But I do not get to play anymore as girls here don’t play the game. No one trains girls also.”

She has said that she hopes her videos encourage teachers to allow girls to play the sport too. Hadiya said, “In our schools, gender divide on the field is evident. My hope is that teachers take the effort to impart grassroots level training for young girls in different sports. It is the school’s responsibility to initiate us into sports, train us, and create a space and opportunity for us. They need to help us, girls, prove that football (and any other sport for that matter) is not the sole fiefdom of boys.”