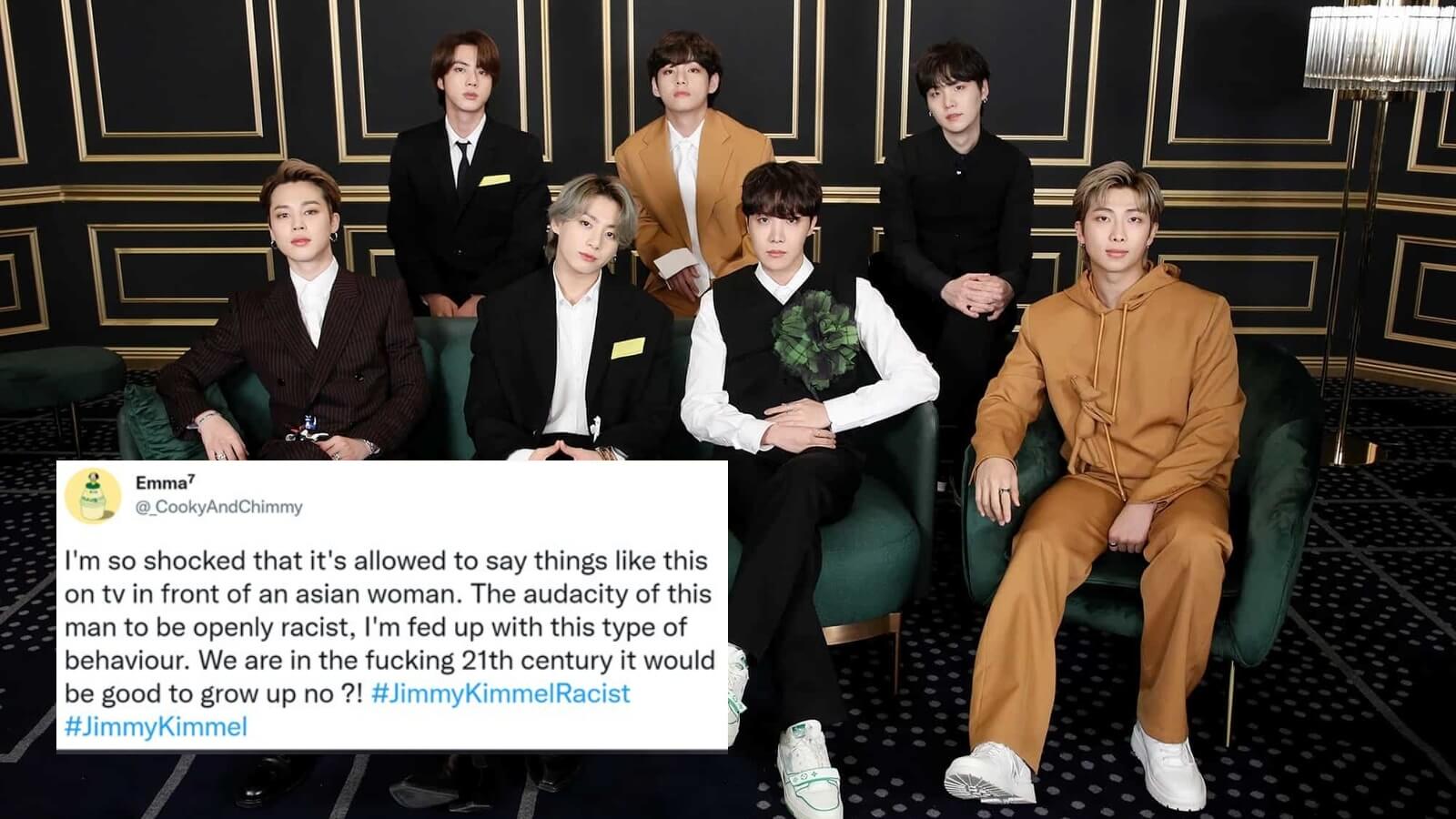 Western TV hosts, it seems really need a lengthy tutorial class on how racism works, how to operate basic Google and how to have some common sense when saying things on national television.

Because it seems that more often than not, these people say some of the most ignorant and harmful stuff all the while having a giant team of writers, producers, researchers and more. Does no one really let them know that what these hosts are saying could be problematic? Or is no one on these teams aware enough of the social implications of certain words, phrases and comparisons?

The latest instance with American television host Jimmy Kimmel begs for this question again since these things keep getting repeated without any improvement in sight. In a recent segment on his show, Kimmel essentially compared the global musical sensation BTS to Omicron or COVID-19 and also used the word ‘dangerous’ for them.

At this point it seems more intentional, knowing that the fans will get angry over these statements and give the host, the show and the clips immense traction, which is what it boils down to right? Negative publicity is still publicity.

What Happened With Jimmy Kimmel?

On January 20th Jimmy Kimmel hosted a segment on his show Jimmy Kimmel Live where he had Emily in Paris actress Ashley Park as a guest. The actress talked about her work and even her much appreciated cover of BTS’ hit song ‘Dynamite’ in a sequence on her show.

Park revealed that she was an ARMY and said “I don’t even realize how much I was ARMY until this happened.”

She further spoke about her feelings during the shoot of the scene and said “I remember being on set that day and I was actually super nervous because I hadn’t been in front of a live audience in a while too, and I said to Lily Collins, who is the best, most supportive person on set ever, I was like, ‘If BTS were ever to see this in an alternate universe, I would want to make them as proud as they have made me as a Korean and as an artist.’”

Her cover was appreciated by fans and even BTS members V and RM posted the clips on their Instagram pages, applauding her work.

Kimmel, however, speaking about her cover said “You sang a BTS song on the show and I wonder what the fallout from something like that is because I know that. We have had BTS on our show and people are absolutely their fans, like they will camp out, and they are probably out in the parking lot, waiting for the next time they come on. They are absolutely crazed for these guys. You have to be careful with an ARMY because they could attack.”

In just a few sentences he mocked BTS, called their fans ‘crazy’ and said the fans could even attack someone on national television. After Park revealed how she had tested positive for the Omicron variant of COVID-19 he went on to say “You thought it was BTS fever”. “They’re both very dangerous. You’re lucky to come out alive.”

Several people were also furious with Billboard’s website over publishing an article over this segment but wording their title in a way that alleged Ashley Park, the guest to having said those things herself.

It seems that since then Billboard has changed the original heading and changed it to something else.

To be honest, the reaction of fans makes sense since this is not the first time it is happening, nor does it seem will this be the last. Prior to this James Corden had also come under fire for calling BTS fans ’12-year-old girls’ and this is when ARMYs are actively trying to show their diversity in age, culture, genders and such.

Are Male K-pop Idols Like BTS Or Stray Kids Overly Sexualized In Fanfiction?