Home Lifestyle Boss’s Complaint That A Woman Isn’t Working 24×7 Like Her Male Colleagues... 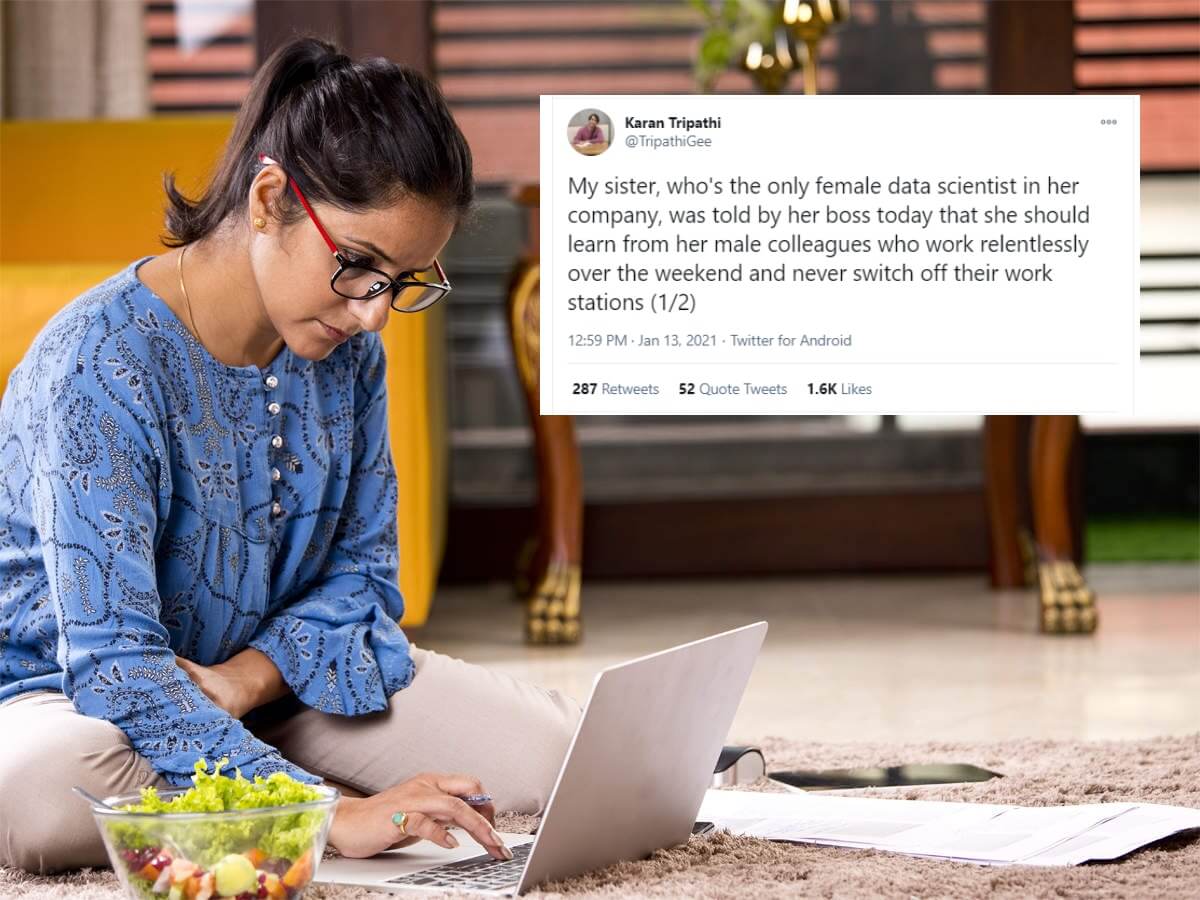 The COVID-19 pandemic has overturned the lives of almost every single person of the world. It has led us to completely change the way we function in our daily routine and more.

The whole wake up, go to office or college, stay there for a certain amount of time and come back home was suddenly out the window. Because of the extremely contagious nature of coronavirus, offices, schools, colleges and all were shut down.

Suddenly, now any and all work is being done solely from a virtual medium, work from home became one of the buzz words of last year.

But it seems like everything, a certain bit of sexism and gender inequality started to creep into this area too. Recently, a Twitter user shared a story of how his sister had to listen to her boss’s complaints that she was not working constantly like her male colleagues.

On 13th January Twitter user Karan Tripathi (@TripathiGee) shared on his page a thread of what his sister had experienced in her work life.

My sister, who's the only female data scientist in her company, was told by her boss today that she should learn from her male colleagues who work relentlessly over the weekend and never switch off their work stations (1/2)

Tripathi’s sister, the only female data scientist in her team, was given a telling to by her boss who told her to learn from her male colleagues and how they are constantly working.

Stating that the males never switch off their work stations, the boss was apparently calling her out for being unable to match her male workers.

Tripathi further wrote on how “The WFH culture has invisibilised the gendered struggles of navigating personal and professional life. Offices are becoming ignorant towards the disproportionate burden of WFH on women, who manage work alongside expectations of being the primary performer of domestic duties.”

Read More: It Took A Pandemic For Men To Learn Housework Isn’t Just A Woman’s Job

This eventually led to many other people also sharing their own toxic boss stories and what they have had to deal with.

Share your own toxic boss stories in the comments below. And even share experiences if you have had a good boss ever.

Update: Ms. Godhuli, from one of the tweets above, actually reached out and shared how her boss eventually changed his perceptions once she reached out her concerns to him. So, maybe not all hope is lost for clueless bosses out there.

College Students In India Usually Don’t Know What They Are Rebelling For: Dangerous Trend...

Campus Somnath - May 23, 2022
Disclaimer: Originally published in August 2019. It is being republished since it still remains an interesting topic till today.  There are very few things in...