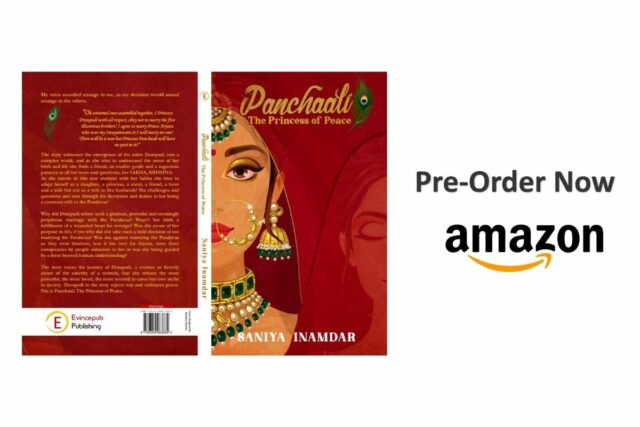 September 7: The epic of Mahabharata by Ved Vyasa is one of the few books that every reader or non-reader is aware of. Not just the main plot but the sub-plots, minor characters, and the significant effects on the main story and their influence on life and its philosophies are unignorable. The beauty of the epic can be understood because it has been examined from multiple perspectives and written from the perspective of many major and minor characters and has made it all richer and profound ever since its inception. However, having been written through the viewpoint of patriarchy opens it to feminist readings and writing from the perspective of women characters. “Panchaali: The Princess of Peace” (Pre Order: https://www.amazon.in/dp/9354463886) by Saniya Inamdar” is one such attempt of exploring the existing plot of Mahabharata but from a completely new, innovative, and modern perspective.

For many readers who may not be aware, Paanchali is the name of the character of Mahabharata, famously known as Draupadi. As the readers lay their hands on the beautiful cover depiction of the book, they feel the air of the distinctly unique atmosphere that the author creates in the book, and even if the book appears to be from the viewpoint of a female by a female, the social and psychological implications of the text cannot be overlooked. The author Saniya Inamdar gives life and voice to the meek and mute Draupadi and presents the version which remained unheard and unspoken of so far. On a subconscious level, Vyasa presents Paanchali from the eyes of patriarchy, and through that viewpoint, she does not get a platform to share her thoughts. Inamdar does this feat by giving Draupadi a platform and providing the epic with a modern touch by giving it a feminist reading.

Inamdar gives Paanchali all the characteristics of the present-day woman where she is given the power of intellect, questioning all that happens around her and gives thoughts to all that otherwise she received silently. Despite having all the luxuries anyone could wish for in life, the readers see Paanchali going through her existential crisis. She is seen questioning not just her existence but also her identity, position, and even whether she is wanted or not. In that manner, she searches for a sense of belongingness, and her desire to be wanted makes her more human than any other character. It also opens the book to interpretations on a psychological level where one can explore the states of mind the character would have gone through and relate it with the existing human condition. At the same time, Paanchali questions the gender-defined roles the social setup has assigned and even in her innocence, she raises questions that may not have gotten anyone’s attention. These are the few defining features that make “Paanchali” by Saniya Inamdar an exciting work to read. They may find more exciting characteristics that would attract them to the book, keep them glued throughout their reading, and give them a unique experience. What makes the book unique is that although the sequence and characters are different from the Mahabharata, the story and the role of Draupadi is changed. Interestingly, she asserts her individuality by refusing to marry the Pandavas, contrary to the meek, submissive Draupadi constructed by Vyasa.

The readers who like to read modern takes on books written in earlier times and explore the entire narrative from the perspective of a minor character can try reading “Paanchali.” In addition to Paanchali being the power figure, the potency of the plot is highlighted by the swift development and quick movement from one event to the other. She does show the readers the story through her eyes but does not hamper their perception and lets them examine the questions she raises on their own. The internal monologue that goes on now and then makes the readers a party in her thoughts and ponders over them. While for once, the readers may ignore the thought because of being involved in the story already, but as they read through her words, they get along with her and think on the lines she talks of.

The readers stay engrossed in the book throughout, and even if they know the story, they still remain interested in reading it due to the fresh thought that they have before them. While there is an exploration of a familiar plot, the innovative style in which the author explores the content makes it fascinating for the readers. In her position as the power figure, Paanchali becomes the ambassador of peace, as the subtitle signifies, which promises the readers of a whole new perspective both to observe and ponder upon. Saniya Inamdar’s book “Panchaali: The Princess of Peace” published by Evincepub Publishing, can be read by not just those who are feminists or like books being explored from a feminist perspective but also those who wanted to hear the story from the one who did not get a voice in the original version written long ago. It would appeal to the readers’ sensibilities and open their minds to new horizons of thought that would not have been explored otherwise.