Home Lifestyle Amitabh Bachchan Should Not Be Giving Honesty Lessons In His Melodramatic Kalyan... 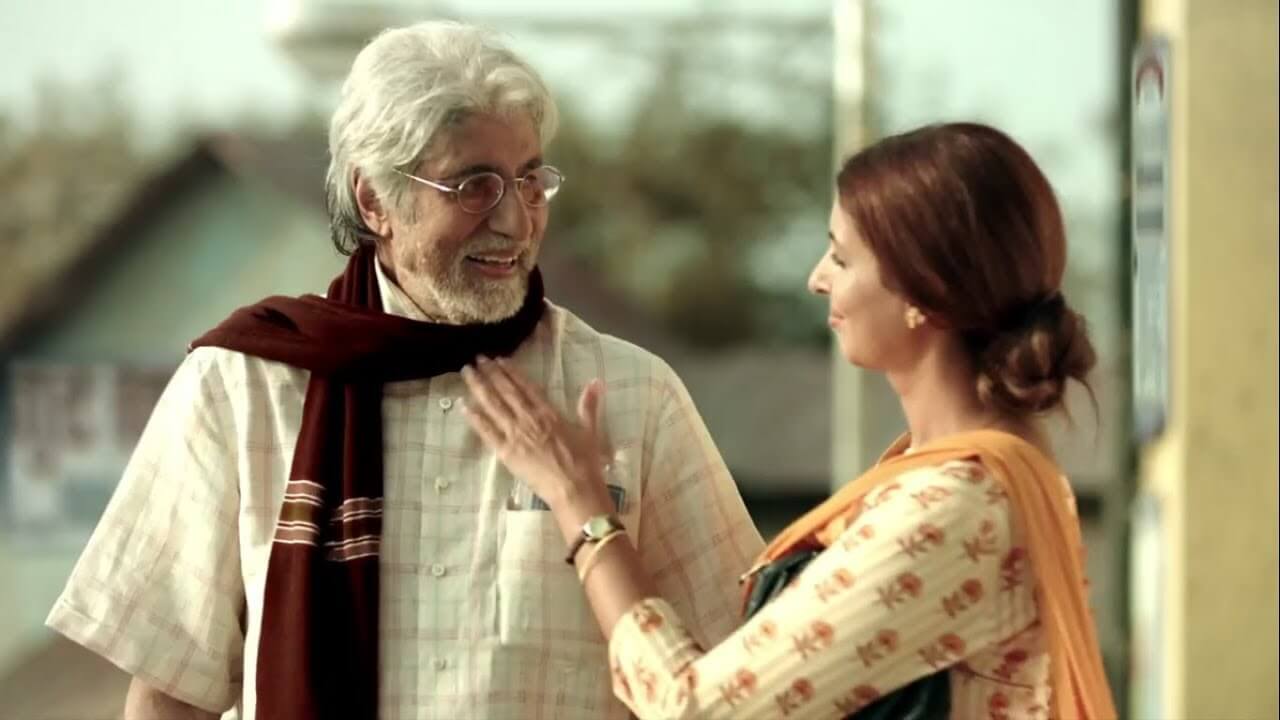 Amitabh Bachchan’s new Kalyan ad that also features his daughter Shweta Bachchan for the first time, is getting a lot of attention, mainly due to the heavy criticism from bank officials who feel that they are being portrayed in a bad light.

Kalyan Jewellers has just completed 25 years of operation in India and in light of that, launched a big ad campaign to emphasise on ‘trust’ that is apparently the thing their brand is (not) known for.

For this, they created a number of ads with different renowned actors that include Nagarjuna, Manju Warrier and more in a similar storyline. The plot being that a father and daughter, go to a bank to collect the senior father’s pension. However, it is eventually revealed that mistakenly the man had gotten double the amount he was to be given.

Wanting to keep his honesty intact, he had come to the bank to report the extra amount and refund it back to the bank. When the bank official instead asks him to enjoy this extra cash, the father delivers a strong message of trust and how wrong is wrong whether someone gets to know of it or not.

But, it seems that the one starring senior Bachchan and his daughter, has a bunch of things wrong in that including bad acting, hypocritical behaviour of the brand ambassador and more.

You should probably see the ad here first:

The ad as a whole is not something that will be included in the best Indian advertisements list and it is extremely surprising that this ad was created by known advertising agency L&K Saatchi & Saatchi.

Let me list out a few things that were just not right with this new Kalyan ad.

Leaving the really bad graphics of the obviously fake bank building aside, the acting in the ad was just horrible to watch. Perhaps more than horrible it was laughable on how bad and over the top it was.

With unnecessary hand gestures, overacting and melodrama abound in the ad, more than anything Shwetha Bachchan looked extremely out of place and why wouldn’t she? She virtually has no experience ever acting or at least acting in front of a camera and that is showing painfully well in the ad. And top it with acting like a girl coming from a modest background. Slow claps for casting director!

Seriously, I feel like the ad director should probably stop working at an ad agency and take a job at one of Ekta Kapoor’s serials since they definitely have no idea how to get someone to present the emotion they need.

Indian ads are now rising towards an extremely high level and no longer are shoddily made with cliched tropes.

It was also shocking to see bad acting from Amitabh Bachchan himself, with none of his seemingly powerful lines being convincing at all.

Pair that with the diabetes-inducing and saccharine sweet smiles in the ad which just pissed me off badly.

Also, what exactly was the point of the ad?

I almost started to laugh at the naivety and idealistic perspective that it shows where with just one line you have changed the corrupt bank official and everything is right with the world again.

This way I believe that Amitabh Bachchan should go to every corrupt bank official in the country and magically transform them with this powerful line.

To be honest, why exactly was Shwetha Bachchan cast for this role? No offence against her, but she is not an actress, and sure she is senior Bachchan’s daughter, but so what?

Kalyan Jewellers is becoming more and more like a family business for the Bachchan household with Amitabh, Jaya, and Aishwarya Rai already appearing in a number of their ads and Rai also being the face of the brand. Next will have Aaradhya in it? Read More: Mr. Bachchan, You Have Genuinely Inspired Us As A Professional But Now I Am Concerned Somehow

By the way, what is up with Kalyan jewellers and them trying to whitewash their image with this campaign especially in wake of their fake gold controversy.

The allegedly fake videos accusing Kalyan Jewellers of selling low quality or counterfeit gold had certainly impacted the trust value of the brand.

And very clearly, the brand is now trying to wash that away by pulling off their celebrity strength and portraying the image of them being against wrong things and always being honest. Looks like they are trying too hard?

#5. What Are Bank Officials Getting All Angry About?

Also, bank officials getting hurt is bullshit, and unjustified. Just because the ad is not showing you in the good light, you think its derogatory, when in fact, you deserve it more than anyone.

Because the truth is that bank people really do make life hell for a lot of people or at least those who do not have higher-up connections.

Apparently, Amitabh Bachchan only realises that social issues exist when he is doing a movie or an ad. Then he is more than happy writing out open letters, making strong speeches and more.

In real life, however, he is more than happy being mum on major problems and wrongs that happen in our society and tweeting away about nothing in particular.

The senior Bachchan should also probably keep quiet about honesty and wrong being wrong till the time his name gets cleared up in the Panama papers leak. Since he does not really have the right to say anything about how ‘galat is galat’.

In Pics: Amitabh Bachchan Is Like A Wannabe For Congratulating Africa And Not France For FIFA World Cup Win