Indian traditional folk media is a rich and significant part of the country’s cultural legacy. Music, dancing, poetry, mime, religion, and even arts and crafts are all incorporated. It reflects people’s ideas, social practices, as well as rituals and traditions.

It is the second phase of India’s theatre evolution, and it has been performed in every section of the country since around 1000 A.D. The changing political landscape in India, as well as the support given to various regional languages, created a favourable environment for the evolution and expansion of traditional theatre.

Let us explore these different forms of folk media practiced across the country for centuries. 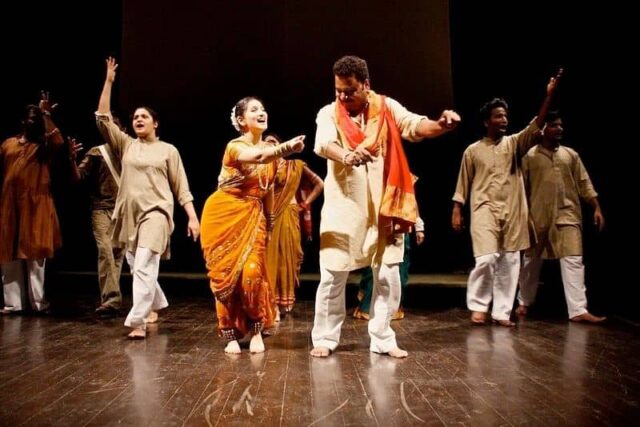 It is an extremely lively and robust form of folk theater originating from Maharashtra and is over 400 years old. Known to have been introduced by Bajirao II, it consisted of professional female singers and a jester who made witty remarks, double entendres.

The word “tamasha” means fun, hence it was all about pure commercial entertainment, the star performer being a female. It originally had no religious or social messages to convey except for the more refined form called dholki-barris which dealt with philosophical and moral questions. 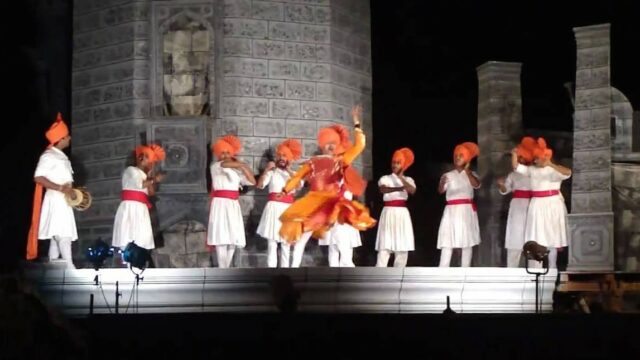 It is a folk ballad, originating in Maharashtra that gained prominence during the 16th century. Dramatic in nature, it is dominated by tales revolving around historical events.

Also known as Harikatha or Harikeertan, it is a kind of concentrated drama or monodrama in which one actor enters a whole series of characters and moods. Believed to have been spread from Maharashtra to Karnataka and Tamil Nadu about 150 years ago, it is mainly associated with the Bhakti movement in religion and literature.

This form of folk media has been used by sages like Kabir and Tukaram to preach the Hindu faith and bring about social reform and political change. 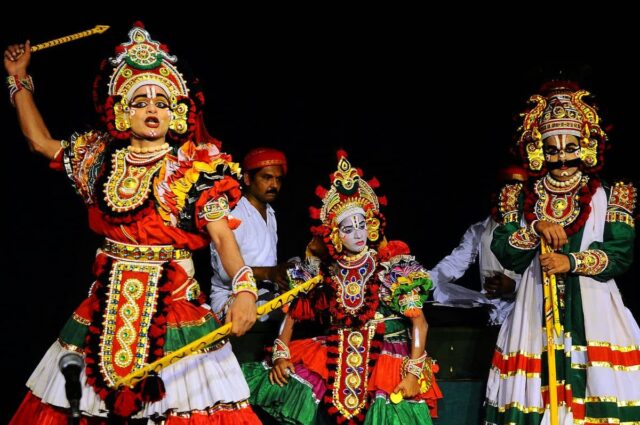 Yakshagana or ‘song of the Yaksha’ was the most popular folk drama of Karnataka in the 16th century. Its themes are from the Bhagavata but with a lot of local flavor, full of song and repartee.

The narrator is the Bhagavata who sings verses and exchanges witty remarks with the players and handles the cymbals and songs. There’s a jester, Hanumanayaka along with the kings, villains and demons- all elaborately dressed up. 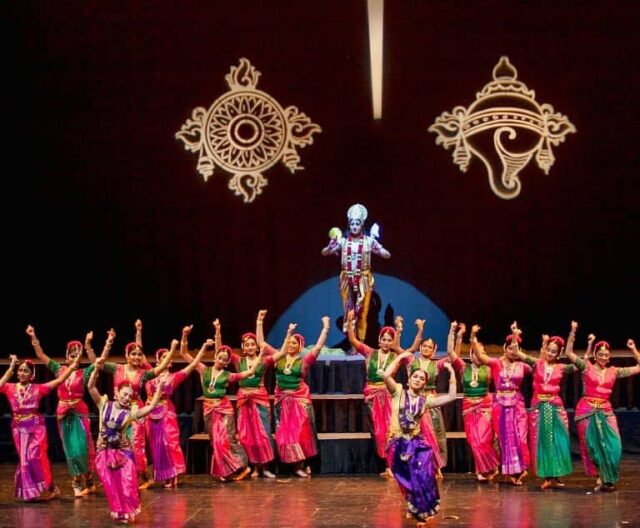 The Dashavatar is the religious folk theater form of South Konkan. A Konkani variation of the Yakshagana, it was first launched by a priest called Gore about 400 years ago.

It’s a re-enactment of the ten incarnations of Vishnu, the story of the Lord and his devotees, generally performed within the premises of a temple and is regarded as an act of worship.

Men of 12 different castes including the Shudra take part in the worship of the local gods. The hallmark of this form of folk is improvisation to cater to the preferences of villagers. 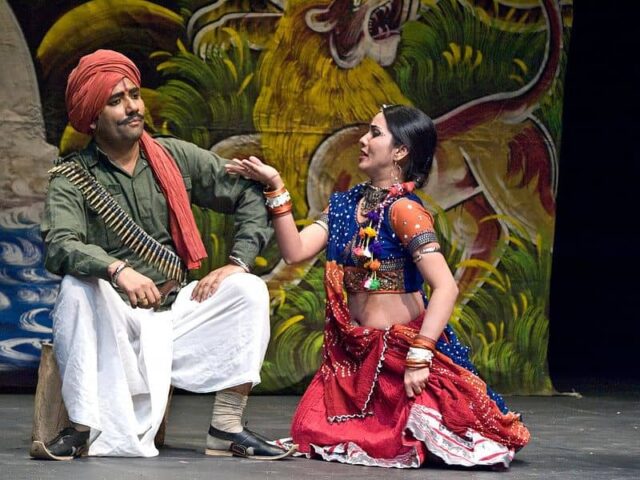 This is a North Indian folk drama performed in an open stage and gets its name from the charming Rani Nautanki of Multan whose young lover disguised himself as a woman to gain entry into her chambers.

Having a simple dramatic structure, its themes are derived from ancient epics and folklore like Laila Majnu. Music is of prime importance in this folk drama, for it provides the pace and tempo required. The makkara and dholak are the main instruments played. Dialogues are sung to popular folk melodies.

Bhavai is the foremost folk theatre in Gujarat. A stylised medieval dramatic form, it has a Ranglo and a Naik besides other characters. The former pokes fun at local leaders, making satirical comments on current affairs and extemporising on subjects of concern to his audience, acting as a liaison between the audience and the players.

The performance starts with devotional songs in honor of Amba. The rags of the music are largely classical. It further consists of acrobatics, magic tricks, dance etc., giving a lively and colorful folk theatre experience. 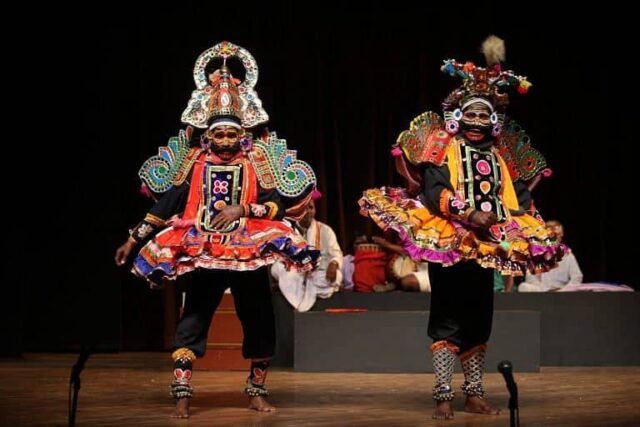 Tamil Nadu’s street theatre, popularly known as Therukoothu, brings together dance and classical literary forms- prose (iyal), music (isai) and drama (natakam). Believed to have evolved from ballad (villupattu) and nondi-natakam (a morality play), it is a mixture of religion and downright buffoonery. Its common themes are Vali’s marriage, Arjun’s penance and Harishchandra’s meeting with Yama. It also has stock characters like the clown (koothadi). 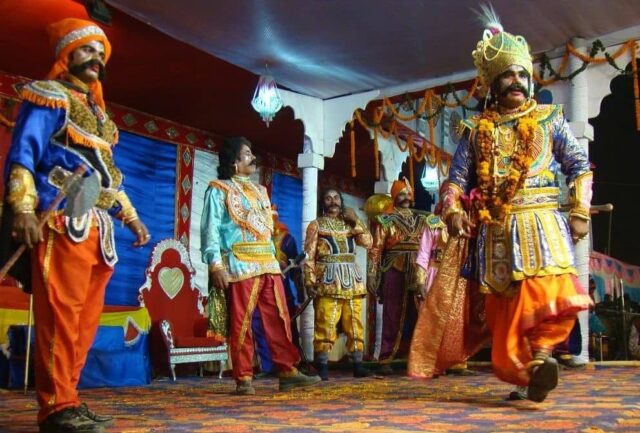 Translating to “journey” in Bengali, the Jatra is the folk theatre of Bengal and Orissa, which gets its name due to the Nomadic habit of its performers. The compositions focused on episodes from the lives of Radha and Krishna, proved to be successful in propagating the Bhakti cult and later the Shakta cult. 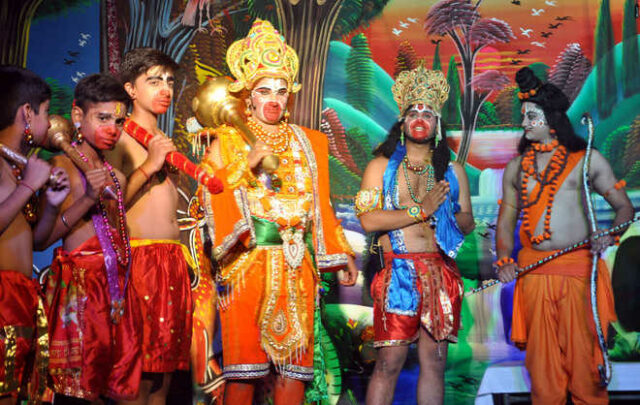 Ramlila celebrates the story of the Ramayana while Raslila focuses on Lord Krishna and his love for Radha. The former is enacted all over North India in September and October during Dussehra.

Raslila, on the other hand, is a dance-drama performed on various occasions in Vrindavan, Gujarat, Maharashtra, Manipur and Kerala. Religious fervor characterizes both these folk theatre traditions.

Do you think that folk theatre has left its influence on the present forms of entertainment? Let us know in the comments down below!