A company over the course of time often has employees come and go. Some are extremely gifted, some not so much, but it is no big deal overall if an employee chooses to leave a certain company and go their own way.

However, you’d think that the founders of a certain company or at least the important and crucial people would stay till the end. That is perhaps why the news of Zomato co-founder, Gaurav Gupta, quitting the company after almost 6 years at it came as a shock to many.

Deepinder Goyal, the other co-founder of Zomato, confirmed the news on his Twitter by sharing a blog post from the company site. He wished Gupta the very best for his new journey and talked about their journey together till now.

Gaurav Gupta had joined Zomato in 2015 as Business Head, Table Reservations. Around two years later he was given the position of Global Advertising Sales Head and President, Large Enterprise Accounts.

In 2018 he was promoted to being the Chief Operating Officer and named co-founder in 2019 under the “Zomato Founder Program.”

This means that Gupta is not an actual founder of the company but was instead the first Zomato employee selected in the program that basically rewards “people who have contributed to Zomato deeply; have built/scaled businesses, and have consistently demonstrated a founder’s mindset for a reasonable period of time, are acknowledged for their passion, commitment and perseverance”.

According to several reports he was regarded as the face of the company especially during their much talked about IPO (initial public offering) status.

As per a report by Moneycontrol, an anonymous source stated that the exit came after he and Gupta had a falling out. Apparently, both the grocery delivery and nutraceuticals were under Gupta’s management, their failure along with some overseas expansion that also didn’t bring in as much profit as expected as said to be some of the reasons behind the tussle between the co-founders.

In his email Gupta wrote: 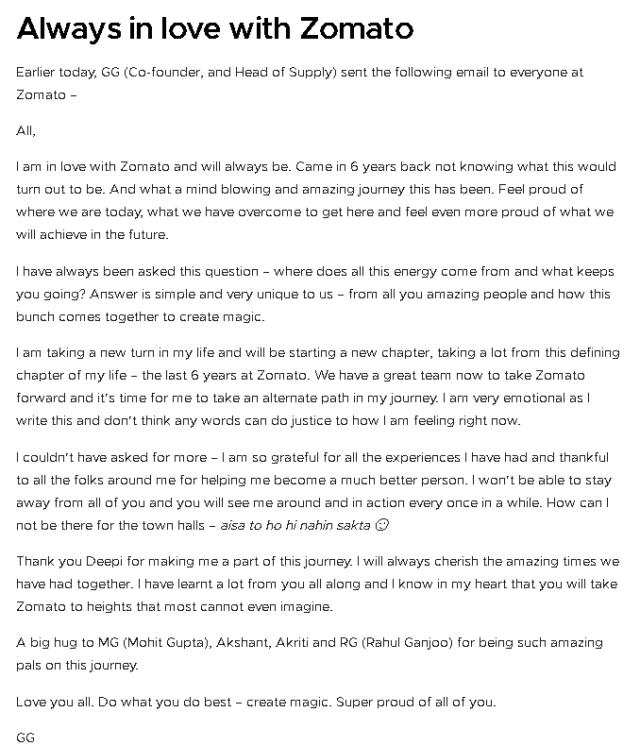 Officially there is no statement about why Gupta quit apart from just wanting to pursue new avenues.

Interestingly though, soon after this news broke out, the fact that Zomato shares had dropped down was also reported.

According to reports when news broke out about Gupta’s exit from Zomato, the company’s share price fell by around 2%. Reports believe that a singular exit, even if high-profile in nature is still manageable and is not a cause of concern. However, concern could arise if this exit leads to a number of other employees and executives also leaving the company.

Some people online are not trying to speculate on whether there is some connection between the two or not.

Some are also speculating that Gupta could have plans to start a new company soon.

Some people online also seem to think this is no big deal and will not impact Zomato too negatively since Deepinder Goyal is still there.

Shocking Stories Of Exploitation Revealed By The Delivery Boys Of Zomato, Swiggy