According to the most recent YouGov-Mint-CPR Millennial Survey, a sizable portion of young urban Indians, particularly men and those from comparatively less fortunate backgrounds, seem to be dissatisfied with the digital world. 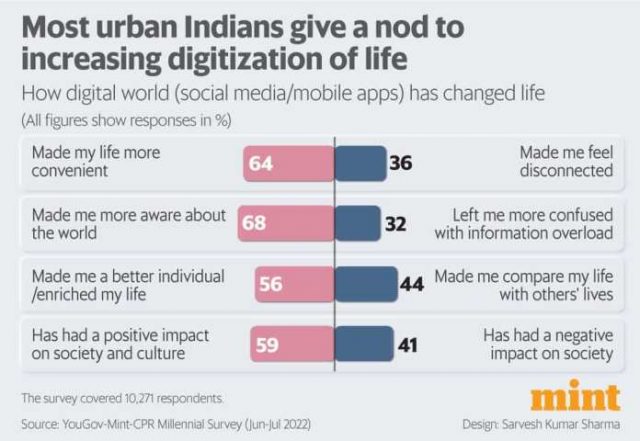 The total statistics are good since other groups, like young women and older, prosperous Indians, are content. Of the 10,271 respondents, around 60% claimed that social media and mobile apps have positively influenced culture and society. Two-thirds claimed that they had improved their quality of life and increased their global awareness. Only 56% of people believed that the digital phenomenon has improved their lives.

The majority of urban Indians acknowledge that life is becoming more digital.

When asked whether the internet era has improved their lives or made them compare their lives to those of others, post-millennial respondents (those born after 1996), who have grown up almost fully in the digital era, were fairly evenly split. The digital era has a negative impact on society, according to 44% of respondents. The results improved as respondents grew older.

Overall, 48% of respondents who were asked to rank the four features of the digital world gave it two or more unfavourable ratings. This was true for 52% of post-millennials and 55% of people who had not continued their education after high school.

The eighth in a series of twice-yearly online polls examining the aspirations, concerns, and attitudes of India’s digital natives, the survey was conducted in June and July by the Indian division of the multinational market research firm YouGov, Mint, and the Delhi-based think tank Centre for Policy Research.

Most Women However Give A Thumbs Up

The internet is frequently associated with gendered violence and misogyny, yet it is also a place where many women have discovered independence and a feeling of community outside of patriarchal norms.

The second opinion appears to have more merit because women (55%) were more inclined than men (48%), overall, to be pleased with the digital revolution. Young men were the least content; only 53% of men in that age range agreed that society had a beneficial impact, compared to 62% of women under 26. The tendency did not apply to women over 41, who had a worse outlook than men in their age group.

Also Read: ResearchED: Why Are Bankers, Engineers And Other Professionals Turning Teachers On Edtech Platforms?

This survey represents the opinions of those who already have some access, despite the fact that women in India are much less likely than men to use smartphones and access the internet. The poll mostly included wealthy households (based on ownership of consumer goods). 204 towns and cities had respondents, the majority of them (62%) were born after 1989. 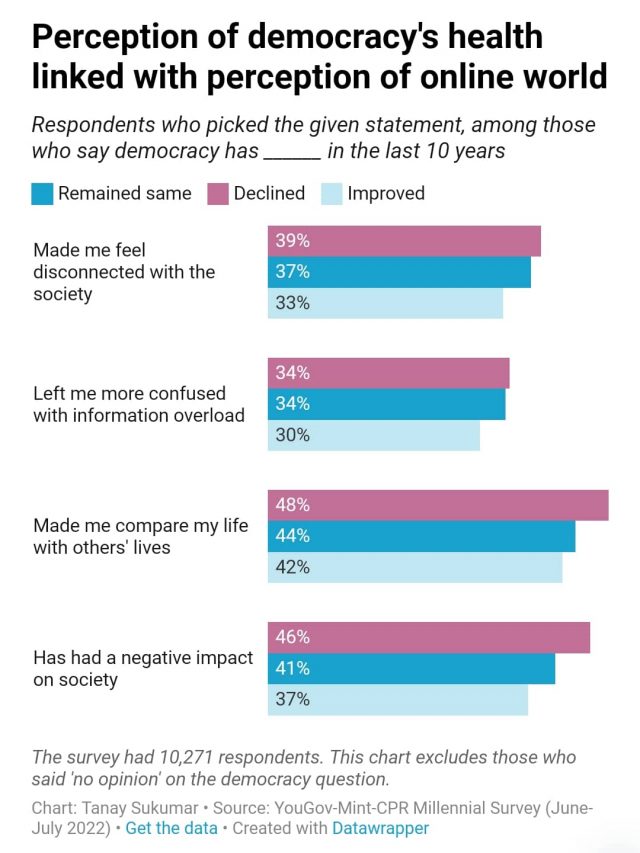 This opinion was more prevalent among those who believed India’s democracy had worsened over the previous ten years: The internet world, according to 39% of respondents, made them feel more alienated from society, 34% said it made them more confused, 48% said it made them compare their lives to those of others, and 46% said it had a bad impact on society.

The percentages were significantly lower in each case among those who believed that democracy had improved: 33%, 30%, 42%, and 37%, respectively.

It was noted earlier this week that BJP supporters (39%) are more likely than those who support another party (23%) to believe that democracy has improved. 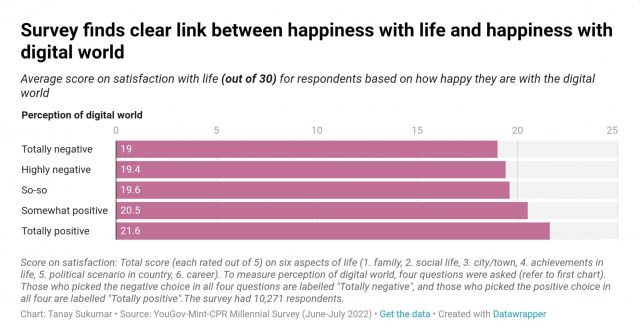 In one of the survey’s questions, it was asked how content Indians were with their families, social lives, cities or towns, accomplishments, the political climate of their nation, and their careers. People who had poor opinions of the digital world also showed substantially lower levels of pleasure with these areas of their lives.

On average, respondents who gave negative answers to all four questions on the digital world gave a life satisfaction rating of 19 out of 30. People who answered “yes” to all four questions gave their lives a 21.6 out of 30 rating. This finding demonstrates the undeniable connections between the modern digital world and the general quality of life. 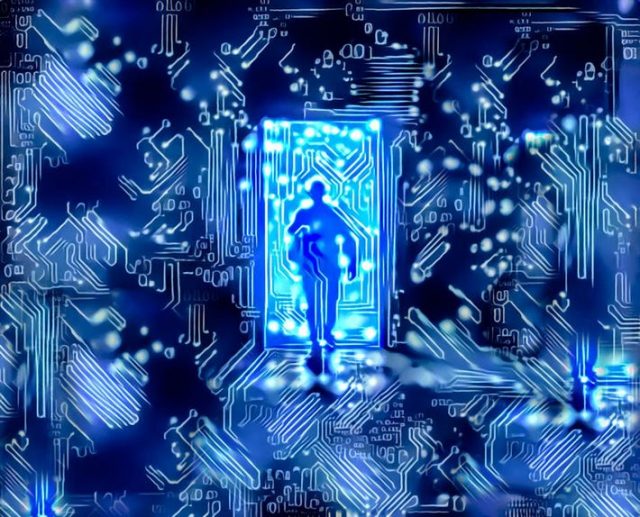 The digital space has given people the liberty to express themselves like never before. Not only does it create more scopes of recreation but also serves as a means of escape. It has made people feel powerful in a world where power is held by only a few.

No wonder, the same got reflected in the data collected. Do you agree with the survey results? Let us know in the comments down below!