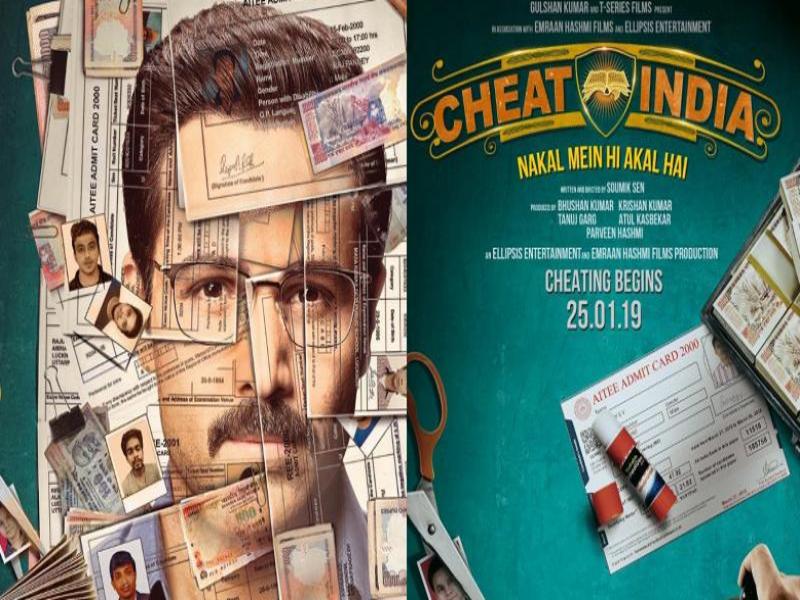 Why Cheat India is a film about the scam that education is in India.

They immediately come to the point by highlighting the hub of engineers (and student suicides) in India, i.e. Kota, wasting no time in establishing the pressure a student faces from all sides – parents, professors, coaching institutes, warden, etc.

Given how nervous the protagonist Satyendra Dubey is, an under-confident teen, who has just given his entrance exam for engineering, we are surprised when the boy manages to clear the exam with an exceptional rank. Turns out, the boy is a great student with immense academic calibre.

The audience too nervously waits for his results, because otherwise, we might know the ultimate consequence. (*cough* Suicide *cough*)

It is students like him that scamsters like Rakesh Singh aka Rocky played by Emraan Hashmi use to their advantage. They take money from the rich, hang it like bait in front of the nerds, who fall for the luxury of easy money and sit for the exams in place of the rich aspirants of Engineering.

Also Read: As A Student, Emraan Hashmi’s Cheat India Trailer Got Me All Fired Up About Our Education Mafia

I have seen director Soumik Sen’s work before in Gulaab Gang, which had immensely talented actors like Madhuri Dixit and Juhi Chawla in the lead roles.

Even though Juhi Chawla was the antagonist, there was a certain charm to her personality, which was endearing yet dangerous. Emraan Hashmi’s character Rocky has also been built on similar lines, albeit less violent as compared to Juhi Chawla’s character.

All characters, including Rocky, had very linear character graphs and motivations. There is no space for a middle ground or conflict, except in the last courtroom scene where the unethical nature of Hashmi’s scam is being debated between a lawyer and Hashmi himself, who blames it on the flawed education system that made him do this. In this to and fro, it seems like the makers themselves couldn’t decide which side they are on and wanted that conflict to be conveyed to the audience too.

Note: Only the prosecutor and Emraan Hashmi are the ones talking in this court, the judge has no relevance, nor does Hashmi’s lawyer. We don’t even see their faces.

The part that I would give full marks for is production design. The lanes of UP, the middle-class houses, the side bed, the petis in the room, the photo studio, the terrace to hang wet clothes, or even the choice of flowers to decorate a house, were spot on.

The costumes of the entire cast were bang on.

The check shirts, their faded colors and the way they were tucked in black trousers as tightly as possible is very relatable. We have all seen men like that in our lives.

The satin nighty and the flashy and gaudy sarees of the women in the family functions is something to applaud. The costume department has done their homework well.

I want to know, who found the actress who played Hashmi’s wife. She totally convinced me that she is a conservative, homely and frog-in-the-well wife who only worries about the family’s food, the maid’s escapades and her husband’s needs (except romantic ones).

She’s been given 3-4 scenes in the film where she manages to steal the show with an impeccable hold on her character and her comic timing.

One scene where I couldn’t help but rave over her talent is when Hashmi tries to give her a hint when they are in their bedroom just before going to sleep and he is feeling romantic. But she ends up misunderstanding it for other needs that he might have like water on his side table, a glass of milk and everything else in the world that she has taken care of, and then she goes on to blabber about the maid and her escapades while Hashmi sleeps away realising the futility of it all. BEAUTIFUL!

Shreya Dhanwanthary, who plays Hashmi’s love interest in the film manages to do a good job out of what she’s given. I wish her character was given more meat.

What the film did well in terms of casting, production, and costume, it couldn’t manage in the screenplay.

There were some unnecessary and rather disconnected love songs in the film, which they could have easily done without. Some elements of the screenplay that were supposed to have a payoff later, had a lousy introduction in the narrative. The writing went really lazy there.

While the first half of the film wasted a lot of time in coming to the point and lost track due to abruptly introduced songs, the second half turned out better. It picked up pace and addressed other aspects of the scam as it became bigger and better (or worse actually).

I’m glad this film didn’t end on a note that is supposed to give us an illusion of a hunky-dory world. I liked how the ending was portrayed as a matter of fact, just like it might happen in real life, maybe even mocking the viewer like WHAT ARE YOU GONNA DO MY LOVE?

I appreciate the intent of the film more than its execution.

Overall, I give 3.5 stars to Why Cheat India.