Ranu Mandal is becoming an internet sensation at a skyrocketing speed.

The 59-year old seems to be a familiar name in almost every Indian household having access to the internet.

Ranu Mandal’s fame is an absolute product of empathetic netizens. Since then, she never failed to be trending news for some or the other reason.

Her life story is no less than a movie plot that has all the necessary ingredients to spice up the internet.

Lets have a closer look..

Ranu Mandal is a classic example of a rags-to-riches risen fame.

Her story starts back at Ranighat railway station in West Bengal. The old woman with a rather unkempt appearance used to sing at the side rails as a part of her daily routine.

However, the morning of 30th July 2019 turned out to be a turning point for her.

Ranu was singing the 1970’s hit “Ek Pyaar Ka Nagma Hai” by Lata Mangeshkar when one of the passers-by caught her attention. 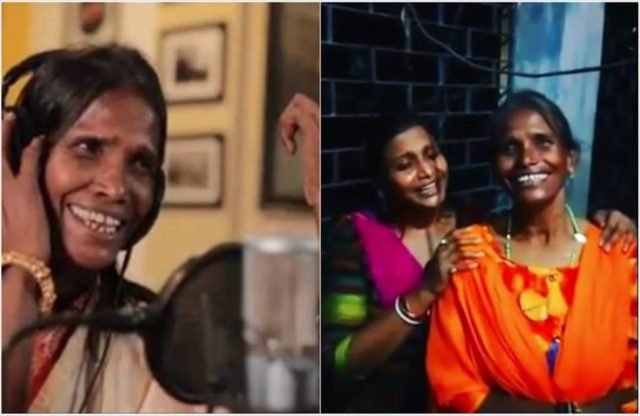 The onlooker was mesmerized by Ranu’s voice and immediately judged her potential. The next thing he did was to record her while she was singing the old melody and posted the video on Facebook.

The overnight fame not only earned her recognition but also made her bag dreamy offers as a singer in Bollywood.

As an aftermath of the instant fame, Ranu was recently spotted in a recording studio with Himesh Reshammiya, who was amongst the first ones to approach the old woman for a singing contract.

However, this is not all.

Her Response To The Riches

Ranu Mandal made sure to maintain her image of an ‘internet star’ by constantly being a hot topic amongst the netizens.

Be it appearing on some famous reality shows or the rumors around fetching benevolence from superstars, Ranu Mandal has always been in the spotlight. In another instance of her newly wedded stardom, Ranu was seen misbehaving with a fan in a viral video.

In the video, Ranu was seen throwing celebrity tantrums to a fan who asked her for a selfie. Not only this, she behaved boorishly and confronted the fan by saying that “how dare you touch me!”

As expected, she was heavily trolled for such behavior and the “internet’s favorite singer” was a little less favorite that day.

However, Ranu Mandal does not consider herself anything less than a celebrity!

And why not? Her never-ending tantrums and inappropriate behavior, makes sure she is always on the web.

Validating the same, the newfound singer recently made it to the limelight for her ‘celebrity-like’ makeover for a fashion show. Sadly, this time Ranu made it to the headlines for all the wrong reasons.

The 59-year-old singer was spotted in a rather heavy and plastic make up for a local public event. Not only this, she came out in a peach-colored ‘lehenga-choli’ attire leaving behind her signature Saree look. 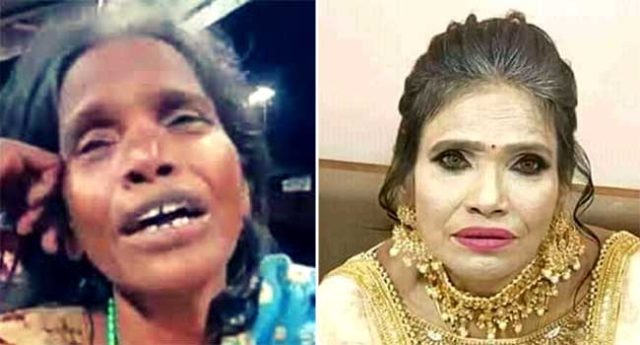 Such an unflattering appearance hitched people into trolling her heavily. Soon after the release of her new look, Ranu Mandal became ‘internet’s favorite meme’ and was mercilessly trolled on social media.

We don’t know if Ranu demanded to get a ‘star-like’ sparkling look for the event or if it was the idea of her makeup artists. Whatever be the cause, the purpose of getting her into the news was well served again.

Considering the heavy trolling faced by the internet sensation, it seems that Ranu’s fans are a little upset about her arrogant temperament.

A little flashback into her life makes us realize that everything she is today is because of the fans who loved her modesty and appreciated her talent. It is due to their efforts and dedication that made her famous and provided her with a deserving platform.

Whereas Ranu, who is loving the star-like life seems to be a little ungrateful towards her fans which is a tad bit disappointing. She is a clear representation of how ordinary people who earn fame without much struggle feel less humbled about the privileges of the glittery life.

Learning from her timeline, we can say that the overnight stardom has been quite overwhelming for the railway station singer and she clearly does not know how to manage it.

We hope that she realizes the worth of her fame soon and values it before it all goes down.

Why Is Facebook’s Digital Currency, Libra Facing So Much Of Flak From Lawmakers?

This Indian Train Has Been Running For Past 73 Years All While Giving Free...

Travel Chirali Sharma - June 30, 2022
Trains for Indians have a very special place. They are the ever-reliable (well... sometimes) mode of transport that literally any person of any budget...