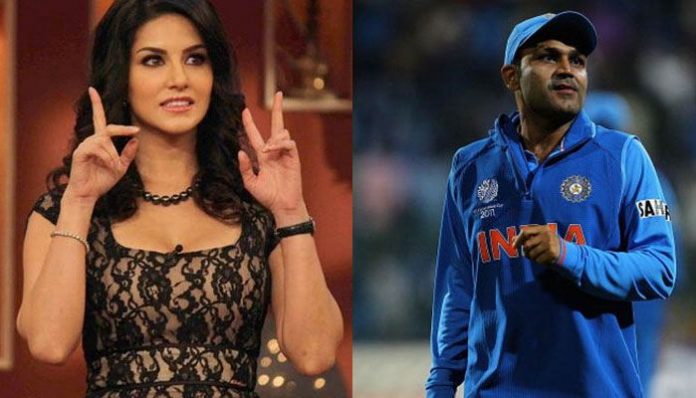 The IPL Match is coming soon and practically the entire country is drenched in its colours, from TV ads to posters, to hoardings to even web series and more.

Adding to the growing list is the web series called ‘Match Ki Kahaani, Celebs Ki Zubani’ wherein a very unusual pairing of Sunny Leone and Virender Sehwag will be commenting live during the IPL match on May 2nd.

Prior to this, Leone had also hosted an episode of this same webisode with Sunil Grover and even Preity Zinta and Saif Ali Khan both have done live commentary on this web series.

In a tweet video, Sunny Leone had said that she is looking for a partner who can not only teach her commentary but also have good knowledge about cricket.

And what better person for that to be than our own Viru paaji. It will be terribly interesting to see this very unusual pairing with on one side the sanskari and susheel Virender Sehwag and on the other side the so-called ‘unsanskaari’ Sunny Leone.

More than anything perhaps, the fact that Sehwag readily accepted the challenge and agreed to the be doing live IPL commentary with Leone is perhaps an example of how even the world of cricket is becoming a bit accepting.

First films, then television and now slowly but surely cricket is becoming less judgmental and more okay with people who come have unconventional professions and/or lives.

Of course nothing will change overnight, and even cricket has a long way to go before it always starts to become a friendly and truly accepting place, but we cannot deny that some progress has been made.

Just take female commentators only, and how far they all have come. When Mandira Bedi made her debut as the 1st woman commentator, more focus and attention was given to her looks and her ‘noodle straps’ rather than her commentary, her knowledge of cricket and her talent in general.

So much sexism and judements she had to go through.

But these days female commentators have become a regular feature and you will find at least one or two in each show.

Piers Morgan Trolled For Mocking Indian Performance At Olympics: Is It Right?

In Good Times And In Bad, We Have Failed Indian Cricket Team As Fans