I have always believed that social media is a funny place. We are allowed to share what’s on our minds, but the creators of this feature must have introduced it to let people share art, emotions, and information.

Who must have guessed that it would one day be used as a weapon against humanity by the so-called “educated” people?

I may be exaggerating but social media is full of such people, and I am pretty sure that you must have come across them on more than one occasion. This time a Twitter user shared a post claiming that there is no Hindi word for “divorce” which expectedly received backlash from other users.

The Twitter user, also a Chartered Financial Analyst, posted a challenge saying, “What is the Hindi word for Divorce?”

She went on claiming that there is actually none. “Because Hinduism never promoted it”, she tweeted. 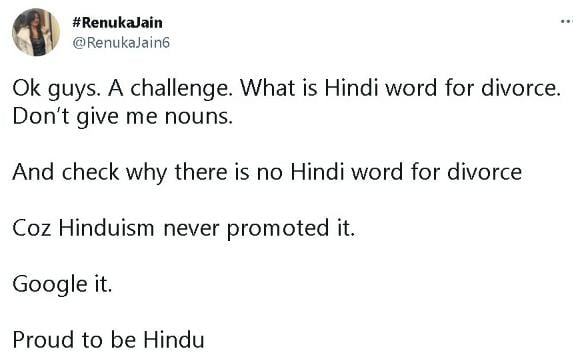 For starters, there does exist a word for divorce in Hindi called “Vivah-vicchhed”. She loses her challenge right away. Twitter users have posted the translation of divorce in other Indian languages also. 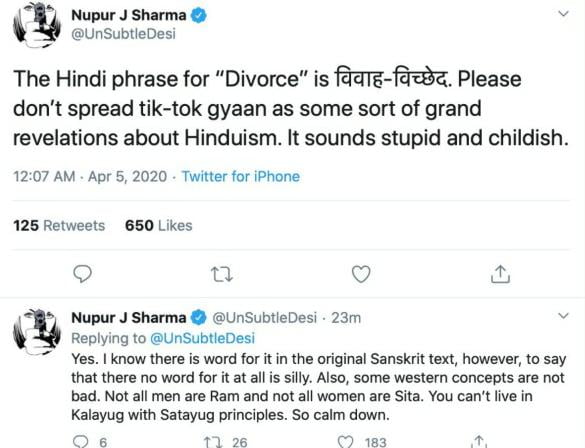 Secondly, Hindi and Hinduism have no relation. Hinduism has no copyright over Hindi. So saying that the Hindi language does not have a word for divorce because Hinduism does not promote it is like comparing apples to oranges.

Read More: The Indian Copy Of Twitter Is Here But Is Anyone Going To Use It?

Also, Twitteratis were quick to point out that while Hindi may not have a word that’s widely used for divorce, several other problematic words exist. Sati, dahej, baal vivah are just a few of them.

Then, many others mentioned the word for divorce in their native language like Bangla, Marathi, etc. All these are Indian languages used by people from all religions, including Hindus.

Let’s not forget a fatal flaw in her logic. Taking pride in the fact that your religion has no concept of divorce is regressive. Staying in an unhappy or abusive marriage is more damaging than anything else. 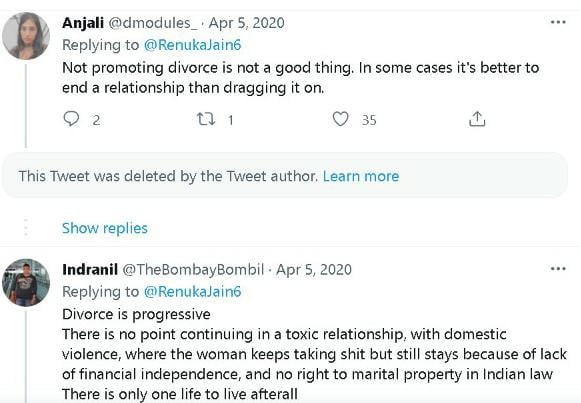 Suggesting that divorce is a bad thing and not a part of our culture discourages people who suffer in marriages to get out of it.

This tweet was problematic on so many levels and what’s worse is that it comes from a very affluent and educated individual. How will our country progress if even the educated youth holds on to such views?

Divorce is ten times better than staying in an unhappy relationship. It doesn’t need to be a tragic event in your life. It can be the start of something fresh.

Muslim Women Twitter Photos Put Out Without Consent, Users Picked Their ‘Deal Of The Day’ On Sulli Deals App