The ceaseless overflow of #boycott trends on Twitter has become a continuous source of entertainment for many of us since the beginning of 2020. It is delighting to chill behind our screens and read tweets of angry Twitterati taking offence at the mildest of issues.

In such a scenario, when from a safe corner of the internet emerge heroes with the wittiest sense of humour, the satirical potential of social media awakens for the amusement of everyday social media consumers.

In September, the parliament enacted three farm bills which permitted agricultural businesses to exchange farm goods without any legal restraints.

It has also allowed private traders to buy and store large amounts of agricultural produce for sale in the future, considerably reaffirming the power hierarchy between capitalists and honest farmers.

What is ‘Chalo Delhi’ and #IAmWithFarmers?

Earlier this morning, hundreds of farmers with food and other supplies marched to Delhi to protest against the farm bills. The police barricaded Delhi and deployed tear gas to keep the farmers away from the city.

However, after negotiations, the farmers have been allowed inside the city to continue with peaceful protests.

The CM of Punjab, Amarinder Singh, has encouraged the government to talk with the Kisan Union and come to a consensus with their demands.

Twitter immediately garnered and showed their support for the farmers with #IAmWithFarmers trend. The farmers have also clarified that their protests will remain peaceful as long as their demands are addressed.

Had there been truly an iota of benefit for farmers in farm bills, @BJP4India Govt would have tried to engage with #farmers!
This high handedness&quelling of peaceful march proves that only concern this govt has is for capitalist pals!#IamWithFarmerspic.twitter.com/UY6mQS56Y9

Also Read: If Income Based Reservation Is Supposedly Needed, Shouldn’t The Farmers Get It First?

Much of the support was not devoid of direct and humorous criticism of the Prime Minister’s actions.

This brings us to the other side of Twitter, which is trending #BoycottFood.

The hashtag started when an account by the name @RoflGandhi_ tweeted this in the morning.

The account was clearly mocking people who support the government and its policies blindly and do not consider the angst of minorities. The sheer ironical undertone of the hashtag represents how netizens can become agitated by trivial matters and switch to cancel culture as a means to block dissent.

Twitterati, including celebrities and politicians, joined the humour. The comedic support for farmers began in anticipation of all those (“Bhakts,” of course) who would oppose the protest.

Chalo now let’s not waste time and quickly #BoycottFood come on twitter you can do it 💪🏼 https://t.co/vXaVsTjdMq

Indian's On Their Way To Boycott Anything Which Hurts Their Sentiments#BoycottFood pic.twitter.com/0MeY0Lx7A8

If you don't like farmers, don't eat food – SC.#boycottfood

Some have clearly mistaken the satirical usage of the trend. However, these could also be the people who have secretly taken offence against the hashtag movement. 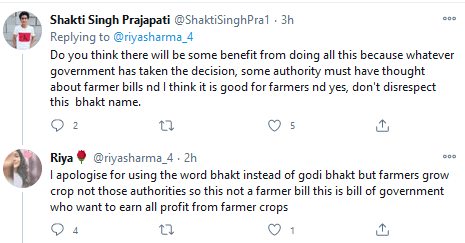 Not a meme,just a photo of location of brains of people who are trending #BoycottFood pic.twitter.com/H4MCnq7nEs

The trend is a motivated effort at satirising online trolls by beating them at their own game.

However, jokes apart, amidst a pandemic, India is witnessing an institutional collapse considering how it has failed the people who comprise the backbone of not just our industry, but also our basic necessity – food.

Our Jawans are fighting at the border but you still want food? #boycottfood

By the way they are fighting at Delhi – Haryana border, with our farmers.