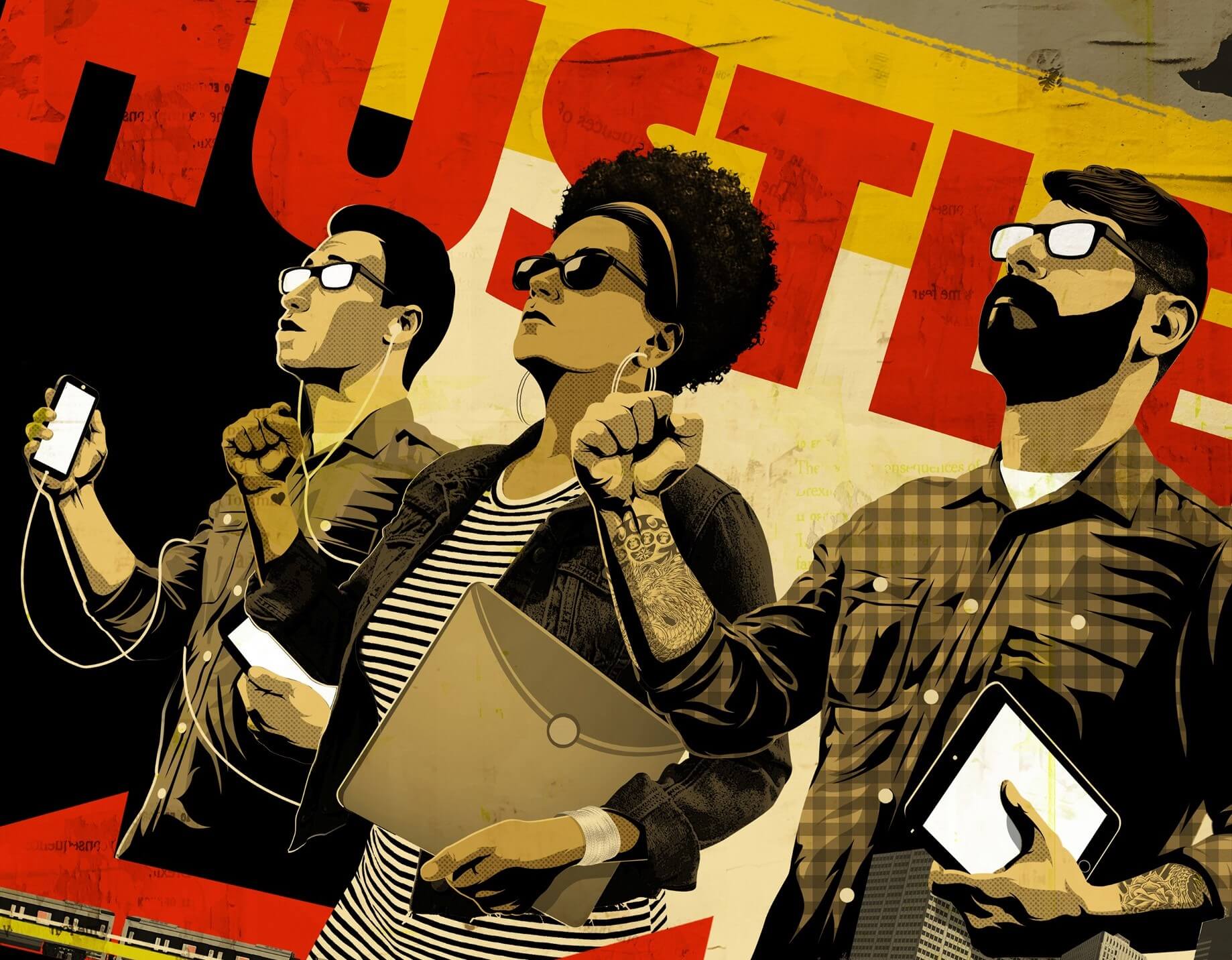 The term mental health refers to the emotional, psychological and social well-being of our mind and taking care of it is very important. It affects how we think, feel and act as we cope with life.

Over the course of our lives, if we don’t take care of our mental health or don’t pay attention to the problems arising due to the lack of it, our thought process, mood, and behavior could be affected.

Many factors contribute to mental health problems, including:

These few are among the many reasons as to what causes poor mental health. But it doesn’t stop here.

If we take the 21st century, for example, more than half of the entire population suffers from Depression and Anxiety Disorder, with one of the major causes being the Hustle Culture.

What Is The Hustle Culture?

“Hard work is the key to success,”

“You can have fun when you’re successful.”

Each and every one of us has heard these phrases at least once throughout our lives, be it from a neighbor, family or a friend.

Motivating people by using these phrases is okay as long as it doesn’t become the sole purpose of life. But the modern hustle culture is extremely misleading.

In today’s standard, hustle culture can be defined as the state of overworking to the point where it becomes a lifestyle. There’s not a day in your life where you’re not exerting yourself to your utmost capabilities — having no time for personal life. The most basic things like helping out your family and friends, going out for a walk or even having dinner at night look like hindrances that would cause harm to your work.

Over the years, overworking has been modernized into what we know today as hustle culture by various self-help books you see on the shelves of bookstores, social media, and even through famous entrepreneurs. Not only has it been modernized, but it has also been made to look normal. The basic mantra for the hustle culture is –

“Work to the point you no longer have a life. You have to be more successful than everybody around you even at the expense of your happiness and mental health.”

Like for example, according to Elon Musk – the founder of Tesla,

Many young people turn to various books, social media platforms, and entrepreneurs as inspiration when chasing their own success. As a society that ambitiously works towards its goal, it’s no surprise to see people falling victim to the hustle culture where there’s no fine line between overworking and success.

How Is The Hustle Culture Harmful?

As the idea of achieving success becomes prominent in society’s mindset and more and more people are falling victim to the idea of the hustle culture, people begin to count success in numbers and figures. More the numbers and better the figures, only then does it mean that you’re truly successful. But that thirst for more never stops and that’s when things absolutely go down the drain.

Here are some harmful side effects to being a part of the hustle culture:

Hard work doesn’t necessarily equate to your success. There are many factors that contribute to a person’s success — not only how hard we work on a daily basis.

No matter how hard we’re working in this case, we’ll never be able to reach the point of overwhelming success, due to the work environment. The truth is, we could be exerting all our energy every day on the wrong things, the wrong way, or even the wrong time.

Not only is this harmful to our body as a source of exhaustion and stress, but we also create an unhealthy mindset for ourselves.

Working hard is an essential part of our growth but hustling, just for the sake of hustling, won’t get anybody anywhere.

Too much of anything does not necessarily mean that it’s perfect. For example, if you’re a journalist and you believe that writing at least 15 articles a day is the key to achieving your goal. However, it turns out that 7 of those 15 articles aren’t worth reading about. But there are only 3 articles that stand out among the lot.

Thereby, the entire concept of “more the quantity, better the work” harms not just the mental health but is also harmful to the job.

Whether it be mentally or physically, the hustle culture is going to take a toll on your body. With the pressure of abiding by the commitment you made to your work, we often create or set unhealthy habits to sustain our working environment.

You start consuming caffeine at midnight in order to complete your assignment, joining late-night study sessions on Discord to focus better, losing out on sleep on a daily basis, skipping meals, and anything else that your body requires to function at 100%. You lose interest in the hobbies you found comfort in, have no time for self-care and lack the time for socialisation.

This is the reality of an over-glorified hustle culture.

Only when you look at it from a microscopic view, will you realise that the things we’ve been normalising are also the reason we experience exhaustion and burnout.

Read More: What The Life Of A Clinically Depressed Person Looks Like When Left Untreated – A First-Hand Account

Origin Of The Hustle Culture

Even though data shows that working long hours and multitasking lowers productivity and kills creativity, hustle culture exists because it is the means to justify the hustle for the future payoff of extreme success. Hustle culture breeds an ongoing toxic environment where if you spend too much time on anything non-work-related, you feel guilty. 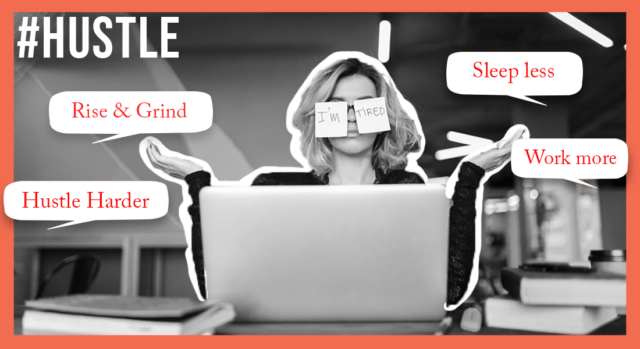 It fuels cognitive dissonance. By overworking and living by the mantra of ‘rise and grind,’ you can end up contradicting your actual goals and losing sight of your ‘why.’

Rooted in behavioural psychology, hustle culture uses a specific reinforcement schedule from operant conditioning. By rewarding individuals after a random number of times, hustle culture uses a variable ratio schedule, the strongest of all reinforcement schedules. Hustlers become dependent on these unpredictable rewards of success, thus resulting in a rush that pushes you to hang on until the next win. Over and over again.

By forcing workers to be in a ‘go hard or go home’ mindset, hustle culture puts the body in a state of fight or flight. This constant stress releases the stress hormone—cortisol—in higher amounts and for more prolonged periods. To normalize these elevated cortisol levels, the body must enter a state of rest. When the body does not get the desired amount of rest, burnout is inevitable.

Burnout is a form of exhaustion caused by constantly feeling swamped. It’s a result of excessive and prolonged emotional, physical, and mental stress.

This continuous stress can be harmful to both your mental and physical well-being. Prolonged elevated cortisol levels are associated with various detrimental effects, including anxiety, depression, heart disease, memory impairments, rise in temper and agitation and more.

Research has shown that increased stress levels lead to reduced professional productivity. To produce quality work, employees must achieve personal satisfaction and conscientiousness rather than simply increase their workload.

Data has also shown that there exists a positive association between well-being and productivity. If individuals are calm and less stressed, i.e., through taking social breaks, they experience improved productivity. So, by putting workers in a constant state of stress, hustle culture is actually paradoxically impairing productivity.

Hence, after all, there are 1440 minutes in a day – why not take some time to still your busy mind – meditate, exercise, do a hobby you know you enjoy. You’ll feel more calm, confident, and resilient to work smarter, not harder. And, It will actually pay off.