When the male farmer commits suicide in India, do we call it a self-autonomy of the male body or marginalization of women?

But the numeric value of female suicides is overlapped in statistical invisibility. The underrepresentation of female suicides and non-recognition as a farmer is deeply rooted in the patriarchal ideology of the inferior physical strength of the female sex.

The woman rejected to be part of the agrarian economy due to her sex is further abandoned after the suicide of the male farmer. From the conflict of inheritance of property to sexual violence – the nation, community alongside the family fails her.

The majority of the farmer’s suicides are byproducts of exponential high-interest debts from rural moneylenders. After the male farmer’s suicide, the widows are subjected to the same condition. Due to gender performativity, many women have not stepped out of the domestic space, let alone know the methods of cultivation.

Suddenly the shift of power to the widow creates a colossal mess. She doesn’t know how to navigate through the barbaric money lenders and rural market. Her kin is ready to take over the husband’s property. Even if she fights legal cases, it takes years to gain property rights.

Benevolent sexism is practiced by her family members, “for the sake of her benefit”, they take her land, money and stop the education of children. Many male farmers cannot bear the possibility of female farmers. It will bring competition for resources and sales. Also, she is a woman, she cannot be in the fields doing man’s work.

In most cases, the women who had autonomy over the property sold the land. She cultivates rented lands, her sense of dependency throughout life makes her apprehensive of being in power. But here comes the dilemma, the women labor force is less demanding. The per capita income is less compared to male farmers. 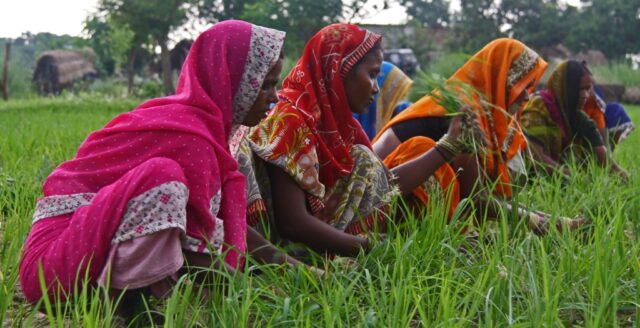 The widow cannot work for longer hours because she has to manage her family. Ramalaxmi Uppunuthala hailing from Andhra Pradesh, says, “Now with just Rs 100 a day, I find it very difficult to manage and to also educate my two children. I don’t get much daily wage work because they ask me to bring a man along, it has become very difficult to survive.”

Panyala Pushpatala has been rolling bidi leaves since a young age. Her father committed suicide when she was a toddler. Her husband has committed suicide due to similar debt-ridden conditions. She earns Rs 60 a day by rolling 1000 bidis.

Her life is full of despair. She says, “Our state has not changed, it seems people are expected to die.” But she has not given up. She strenuously works every day so that her children can get out of the cyclical poverty. She wants them to read and be good human beings.

The derogatory conditions of widows and women are normalized. The children drop out of school while many daughters enter into prostitution. From fathers-in-law to the labourers in the field, the woman is sexually harassed and threatened. In certain situations, the widow is married to even more exploitative households against her will.

The state incentives are meager and do not reach her. In 2017 in Muzaffarnagar, a sugarcane farmer Jaiveer committed suicide and killed his two daughters with bullets. The debt of Rs 1,10,000 fell upon the widow Meenu Singh.

Her immediate kin initially promised to cover the cost of her son Krishna’s education, but she was alone at the end of the day. She hardly goes out of her home. The sorrow of losing her two daughters kills her. Her last hope is Krishna.

Also Read: Why Is Media Not Covering Meghalaya Farmer Protest Over Dam Construction On Umngot River?

The compensation scheme is varied in different regions. Only 30% of the farmers’ families in Maharashtra received compensation in the last twenty-five years. But in recent years, the government has allowed the transfer of property rights to the widow.

But this is not the case in other states. The state procedure is so rigorous it falters the widows and women of the household to take part in the rural economy. In Telangana, for ex gratia benefit, one needs to show 13 certificates. While for taking loans, in many states, the widows need to show proof of land ownership and for beneficiaries evidence of one year of crop failure.

During the farmer’s protest, 60 widows from Vidarbha in Maharashtra showed solidarity with the Punjab farmers. They participated in a tractor rally on Republic Day 2021. Bharati Pawar, said, “I have come from Kelapur taluka in district Yavatmal in Vidarbha region of Maharashtra. This is a taluka and district which leads in the highest number of farm suicides.”

They were against the three farm laws that would have incremented the rate of farmer suicides. She said, “Today, I stand here to express solidarity with Punjab farmers. I don’t want my sisters in Punjab to go through the tragedy we witnessed in Maharashtra.”

The widows demand the settlement of the existing debts through integrated measures. There is a need for reasonable compensation, free access to healthcare and educational services to come out of the debt. Employment opportunities for the victim’s family will help to alleviate their conditions.

These women need formal rehabilitation facilities and proper marketing of outputs. Targeted finance and micro-financing will help. When women get the subsidiaries and required facilities, they can stand on their own. Their sorrow is insurmountable but their resilience to fight against the structural sexism of society makes their efforts very commendable.

But not all forms of farming are considered part of the rural economy. The patta,  land issued by the government to farmers, is susceptible to being taken at any moment. Tribal farming is called ” encroachment” of lands.

The usage of forests for development projects has alienated many tribal farmers. So how do the widows and women of the house get recognition for beneficiaries or loans? Opportunities or settlement rights?

According to reports, the rate of female suicides is more in agricultural laborers than cultivators. The female cultivators mostly coming from a better economic condition are remarried. The female farm laborers consisting of lower castes enter the cyclical debt trap.

Collective and community farming is a measure that can provide maximum benefit and a guarantee of safety.

Trans women have limited job opportunities in India. They mostly are beggars and sex workers. With the recognition of the third gender in 2014, there has been an increase in inclusive employment by companies. What about the trans women farmers, who hardly get lodging and land under their names?

In Tamil Nadu, the first trans-run dairy farm carried on a 1.5-acre land provides a meaningful method of income generation to trans women. With state incentives and community solidarity, they have achieved great heights.