On 8th March 2021, Pakistan witnessed its 4th Aurat march across different places in the country. An annual procession, the Aurat March takes place on International Women’s Day, where women take part in the socio-political demonstration to increase awareness about gender equality.

Keeping up with the tradition of the past 4 years, this year the march called out for the protection of women’s rights.

Since the COVID-19 pandemic has not entirely been fought off, many people showed their solidarity by not attending the march in person, but by posting their own manifestos on social media.

Being a country that is widely known for gender inequality and violence against women (in lieu of the Malala Yousafzai case), the Aurat March in Pakistan is way more than just about gender rights and equality propaganda – it marks the rise of a part of the community that has been oppressed for quite a long time. 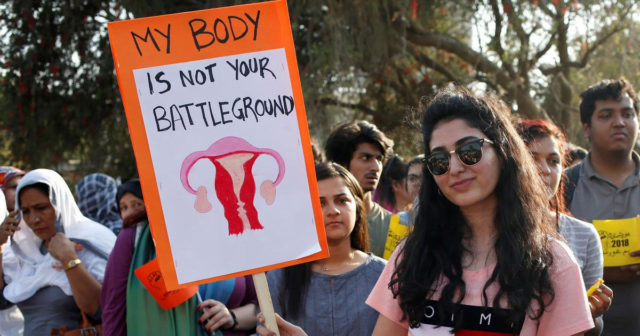 It is extremely interesting that women across the country get together to advocate for gender equality in a country where not all places allow women the right to even move around freely on the streets. The Aurat March provides a platform for them to voice their opinions in full force.

This year, the Aurat March was organised in several cities of Pakistan, including Karachi, Lahore, and Islamabad. Different marches in different cities carried out different manifestos as well.

The Karachi chapter addressed patriarchal violence against women, the march in Lahore addressed women’s health problems and healthcare, and the Islamabad chapter focused on the ‘crisis of care’.

Also Read: ‘I’m Not Like Other Girls’: 4 Times That Feminist Women Belittle Others Without Realizing

Placards with loud and important messages like “Stop underage marriages” and “Equality is Important, not Victimisation” were raised in the march. Volunteers in Lahore even laid out a ‘#MeToo Blanket’ offering a platform for women who underwent sexual harassment to share their experiences.

The Aurat March this year was extremely important and was a message against the patriarchal extremist groups of Pakistan.

Last year, a rival religious extremist group “Haya March” caused a lot of violence in Islamabad. Stone pelting and harassment of the participants was witnessed as well.

The protesters have been indirectly warned by religious parties to not cross Islamic cultural markers, thus indirectly waning off support. The country is highly influenced by the religious right-wing parties and thus condemns the practice of Aurat March because of the ‘scandalous propagandas’.

While people were apprehensive about holding a march this year, the Aurat March of 2021 proved to be a strong comeback against extremist groups.

How Did Social Media Participate In The Aurat March?

The peaceful, quirky march has been appreciated by many on social media platforms. The march bluntly portrays the effect of patriarchy on Pakistani society and how patriarchy and capitalism work hand-in-hand.

One of the most important manifestos introduced this year is the decline in women’s health care, even during the time of COVID. 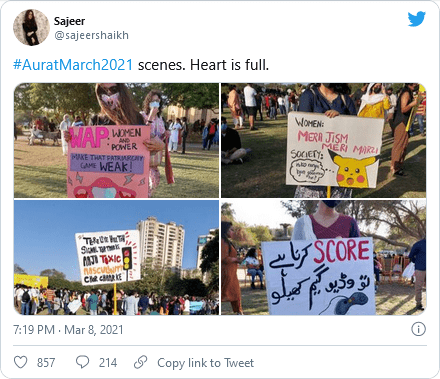 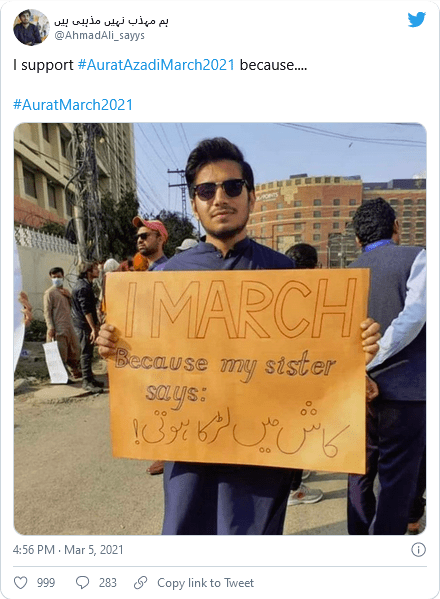 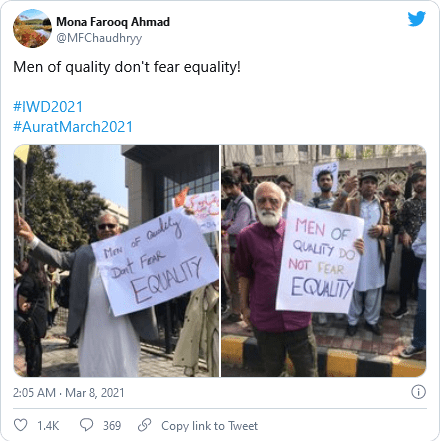 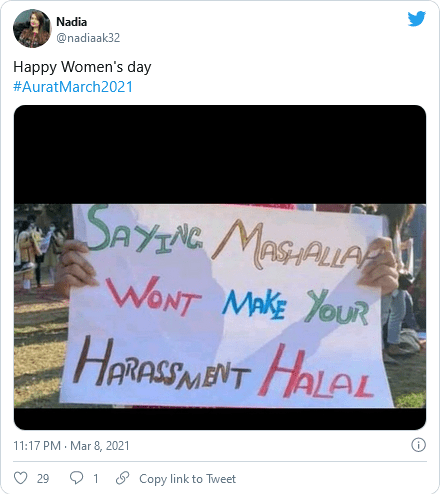 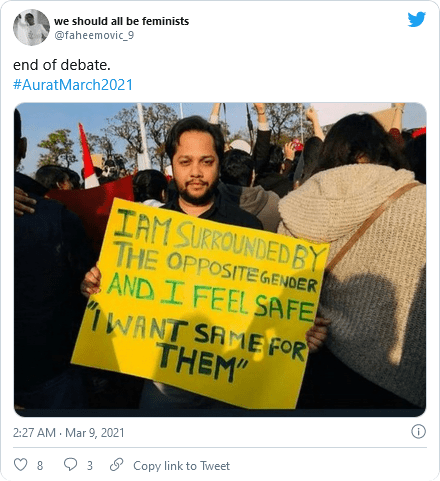 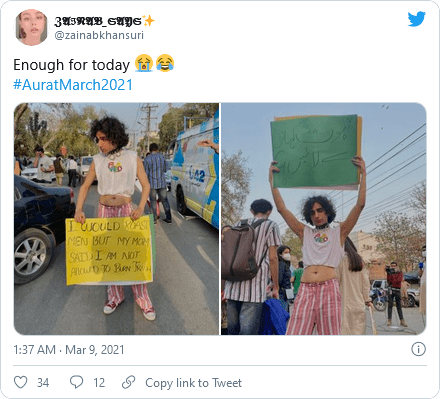 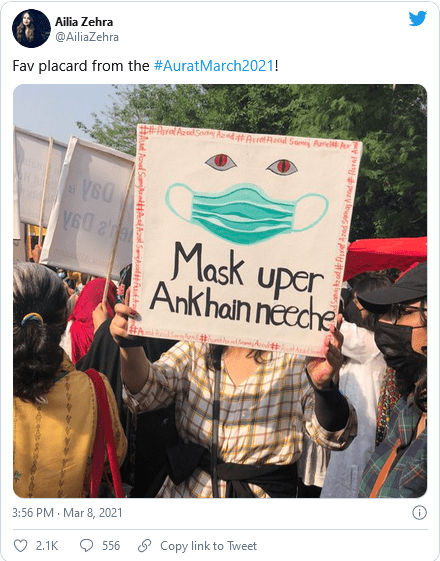 While the Aurat March is no less than a spectacle to witness in Pakistan, it is not merely a protest by women to get themselves heard.

Activists have noticed that the march has in fact caused an impact by initiating a nation-wide dialogue about women’s rights in an extremely patriarchal society. Year after year, more allies and supporters join the march and make it successful. 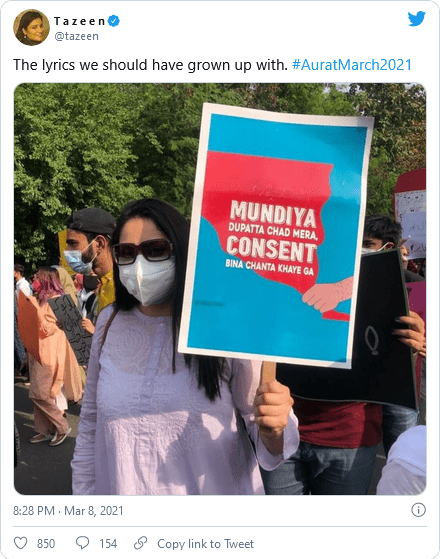 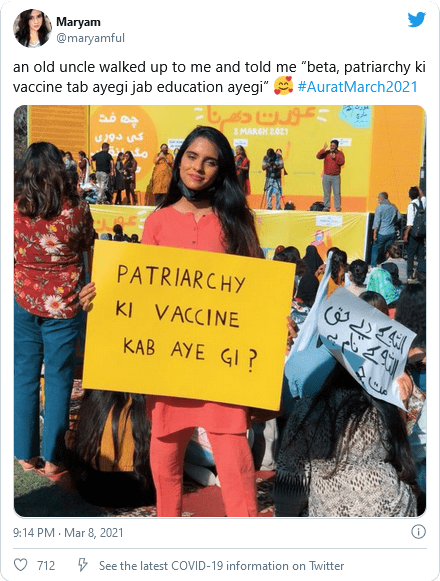 The Aurat March has also brought forth issues of consent, understanding of sexual and living autonomy and is bringing out ‘uncomfortable’ discussions, holding the ones accountable for gender oppression across the years.

The march indefinitely showcases the power that Pakistani women were deprived of across the years.

Do you think Indians should organise an Aurat March and extend our solidarity towards women’s rights?

Will it also provide a way for Indians and Pakistanis to bond over similar ideologies? Let us know what you think by commenting below.