It’s easy for thoughtless politicians like Ranjit Singh Chautala to pass such insensitive comments but for the common people who have to live this horror, the Delhi riots would be hard to forget.

It seems to me that every time I look for updates on Delhi riots the body count has gone up. So far 49 people have died because of these bloodthirsty riots. 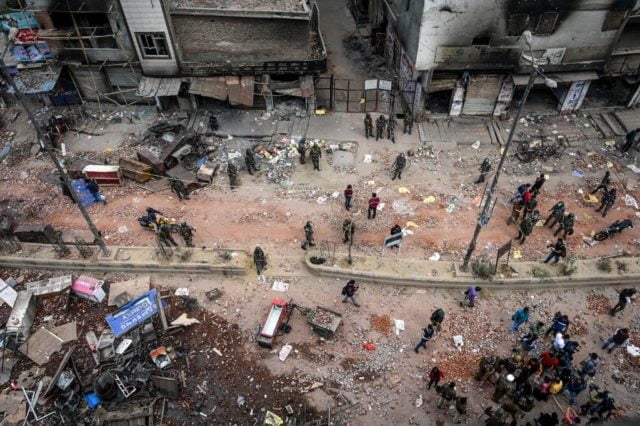 This incident has uprooted and destroyed the lives of many people, be it Hindus or Muslims.

Following are some heartbreaking stories about Delhi riots which show how people belonging from both religions have been affected by violence and brutality.

Watching Your Brother Die In Front Of You

Shiv Vihar’s resident Saleem Qassar had to identify his 58-year-old brother Anwar Qassar by his foot as the rest of his body was burnt to death.

Anwar was shot twice and then pushed into a raging fire, and when he tried to get up he was gunned down again. Salem watched his brother die in front of his eyes but was helpless to do anything.

Only Anwar’s foot remained which was picked up and ended up at a hospital’s mortuary. The family identified the deceased by the peculiar shape of his nails and his characteristic cracked heels.

Anwar’s family also had to take refuge at their Hindu neighbor’s house. Saleem said that the neighbors put tilak on their foreheads and gave them saffron safas to wear on their heads to pass us off as Hindus.

Saleem added, “Had they not sheltered us for 12 hours, none of us would have been alive”.

On 24th February 26-year-old LLB student Rahul Solanki went out to buy some milk but never returned home. He was studying at a private college in Ghaziabad.

Rahul was shot in the right shoulder near his neck and succumbed to his wounds while being treated at the GTB hospital.

Rahul’s friend who was with him during this ordeal said, “We saw a mob approaching us and began to run. We were bare feet and Rahul went to put on his slippers. While he was putting them on, some unidentified persons shot him dead.”

Solanki’s distraught father said that the rioters are winning and that the administration has done nothing to calm the situation. There was also a delay in handing over the body by the hospital which only made the pain worse.

Forced To Sing National Anthem While Being Beaten To Death

23-year-old Faizan was illegally detained by Delhi Police for 36 hours and made to sing the National Anthem in between beatings.

Faizan was taken into custody on 24th February and died on 26th February. The police claimed that they never took Faizan into custody however eyewitnesses, doctors, legal volunteers, and family members have refuted this claim. They strongly believe that the torture at the hands of the police led to Faizan’s death.

Kismatun, Faizan’s mother said, “His body had turned blue all over when they released him. He had stitches on his ear and on his head. The policemen had hit him, putting a baton inside his throat. He was in so much pain that he could not even gulp liquids such as water or milk when we got back home”.

7-Month Pregnant Wife Had To Identify Her Husband’s Body

27-year-old Rickshaw puller Prem Singh disappeared on 25th February when he went out to buy some milk for his 3 children. He was the sole breadwinner of the family. When his 7-month pregnant wife Sunita and his sister Sarita first went to the police station they were shooed away.

It was only due to some media attention that the family was able to register an FIR. Sarita couldn’t find him amongst the people who were detained at the police station or at the hospital wards for the injured.

After an endless search, Prem’s body was found in GTB Hospital’s mortuary.

Sunita said, “I don’t know how I will look after the three children and one who is yet to be born.”

These painful real-life accounts of the Delhi riots show that violence never helps in solving any problem, it only makes the matters worse. Stories from both sides are equally gut-wrenching and harrowing.

The situation may be getting back to normal but the lives of the families who have lost their loved ones won’t ever be the same again.