Home Social Opinions Miami Police Apologises To Angry Protestors By Going Down On One Knee... 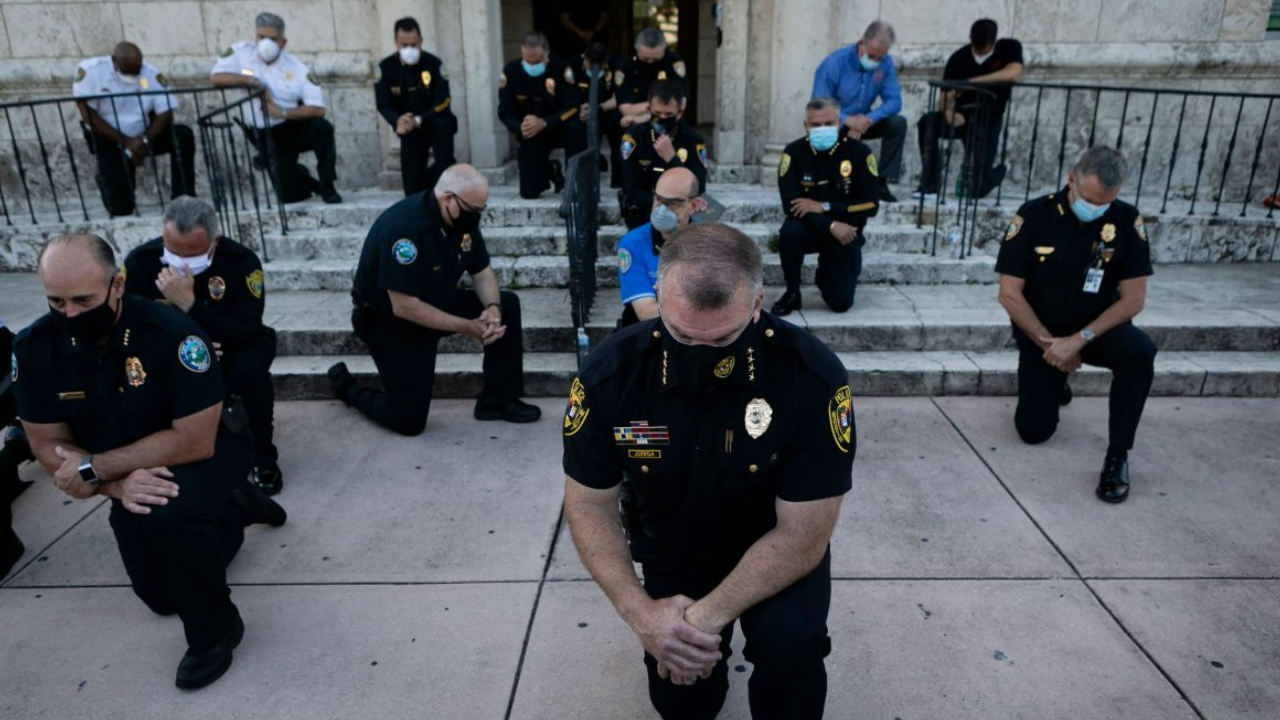 Protests sparked off across America right after George Floyd, an African American got killed under police brutality in Minneapolis on May 25th, 2020.

The man was accused of having paid a counterfeit $20 bill to a retail store, which was followed by an attempt to arrest him on the spot.

The Federal Bureau Of Investigation (FBI) is conducting a federal civil rights investigation for the same after the request of the Minneapolis Police Department.

Derek Chauvin, a white officer who was a part of the team that had reached the spot for investigating the accusations against Floyd, has been booked under the third-degree and second degree (manslaughter) murder charges.

The demonstrations and protests which were initially restricted to the Minneapolis – Saint Paul area were quite peaceful and comprised of people marching in defiance of the officers and their acts of brutality.

However, things took a drastic turn the very next night when the protests undertook a violent tone – vandalism started dominating the protests wherein police vehicles were set on fire and protesters started pelting stones at buildings belonging to the government.

Mobs encountered police officers and their rubber pellets and smoke bombs fearlessly. They continued voicing their opinions on ‘Black Lives Matter’. While the situation worsened in places like Washington, there was a stark contrast in scenarios at some sites of protests.

The police officers in Miami came out of their quarters and knelt before the infuriated protesters, symbolically apologizing to them.

What Are The Masses Protesting Against?

Police brutality has been a major cause of concern for civilians in America. The same has caused several deaths over the past centuries.

These acts of brutality have mostly victimized members of specific groups including but not limited to the LGBTQ or the multi-ethnic ones.

The culture of white supremacy followed by an extensive practice of racism has often been cited as the main reason for these brutalities.

Protests have panned out over the centuries condemning these atrocious acts of the police. Various white citizens belonging to the lower classes have often joined them in their struggle.

The police forces have always retaliated with measures to restrict and control their activities under such circumstances.

For the past few years, these protests and demonstrations had phased out to great extents.

However, George Floyd’s death caused a renewal in these violent uprisings.

Within 24 hours it spread across the country. People have been pushing forward with appeals for the ‘Police to Quit’.

Also Read: 2020 US Elections: Michelle Obama And The Obama Factor

How Has The Police Reacted To The Protests?

Though the police forces customarily did put up a fight against these protesters, their reactions were quite different this time.

The police officers knelt at the protest venues (Miami), paying their respects to George Floyd. They supported the cause of the rallies, condemning the brutality with which he was mercilessly killed.

NBC NEWS recorded a Nebraska Police Sergeant commenting, “It’s all of us versus bad people and bad cops –we want them out of the line of duty.”

The police officers kneeling before the protestors resulted in the cracks between the two opponents getting temporarily healed. The mob was in tears.

Together they sat down and prayed for all those who had lost their lives due to such inhumanity.

This genuine gesture on the part of the police officers at Miami expressed their disapproval of such inhumane acts being inflicted upon fellow-human beings.

Their positions on either side of the barrier cease to matter as they demand justice in unison.