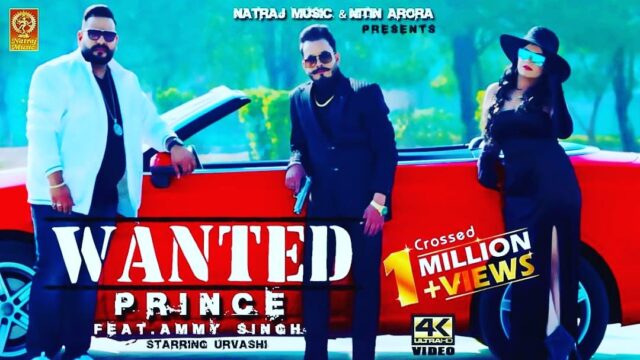 The brand-new Punjabi song has been launched in 2021 by the successful and prestigious label Natraj Music India. Crossing the 1 million + views on YouTube is something most people flaunt about. And Prince Kumar has got the opportunity to witness how it feels to be in the top league. The unbelievably excellent and expressive film has been produced by the eminent music producer of the Punjabi music industry: Nitin Arora.

The celebrated Indian Punjabi music singer has made his mark by officially crossing over 1 million views overnight. The budding music artist is majorly known as the “Wanted Prince” due to his infectiously spreading fame amongst the Indian and International masses. He never anticipated that his catchy single uploaded on the digital YouTube platform would fetch him such immense fame in no time.

The song “Wanted Prince” has been sung by Prince Kumar and its famous jingle and lyrics have been written by the talented Kirat Kaler. It seems like the young singer’s music video is set to cross a bigger number in the upcoming days itself. Fame has no boundaries when you are worthy of it.

His “Wanted Prince” video got viral as soon as his single got released. The video begins with a helicopter landing in hills and Prince walking down the ail. The brown and bearded singer with his shades on isn’t a sight to miss. The rest of the video showcases the singer along with Ammy Singh and Urvashi living a lush life.

The brand-new 4k video has totally rich vibes to it. This also adds to the ever-growing popularity of Prince Kumar’s new single. His extraordinary singing skills are majorly responsible for such a positive response from the Indian and international audiences. His exceptional personality along with a powerful voice adds more charm to his overall outlook.

Prince Kumar’s secret to overnight fame is to start living with the fact that destiny always works in favor of those who value their blessings. Positive thinking in life will always get you more of what you anticipate in life. He is a faithful and committed believer of the “Law of Attraction”. He is a talented singer and pursues acting and modelling too. He is very soft-spoken, has a positive attitude and helps others in need.

Prince Kumar has been in news due to his trending single. The novel singer’s official music video crossed 1 million + views on YouTube only in a few hours of the official video release. The singer believes that having a posh lifestyle takes a lot of hard work and patience. He praises originality not only in his music but also in terms of individuality. The rising Punjabi pop star certainly has miles to go.

Get in touch with the “Wanted Prince” singer through the below-mentioned social media contact links: