Many say casteism is not prevalent today. It cannot operate in prominent universities in urban areas. But that is the allusion to pure ignorance, as Edith in the movie “Enola Holmes” said, “Politics doesn’t interest you because you have no interest in changing a world that suits you so well.”

Casteism operates subtly and loudly in DU, in your canteen menus and classrooms. As an outstation student residing in Delhi, I observed casteism in its rawest essence than I have ever seen before.

The legitimacy of the reservation of seats has been a long-debated issue in academic spaces. In classrooms, I have observed many times Dalit students do not answer questions or provide inputs. There is a constant anxiety that pervades the minds of some Dalit students, fear of being bashed and excluded by students of upper-castes. What if they say your opinions are invalid because you are in this college due to reservation?

The classroom is an inclusive space for discussion and debate. But when it comes to expression, the dominant voices of the upper-middle caste are heard. I remember my third semester’s class discussion on the text Bhimayana by B.R. Ambedkar. A debate sparked up if the reservation was necessary for this age.

To my disbelief, most students were adamant in pointing out how “non-meritorious” rich SC or ST students from their school got into better colleges despite getting lower grades. Most stated reservations should be based upon the availability of economic resources, negating the experiences of thousands of socially disadvantaged lower castes outside their small environment.

In the class, amidst dominant unmuted voices and comments, a small comment slipped from a Dalit student from southern India. She stated about her underprivileged conditions. She never really visited outside the village. She could take admission due to reservation. She hardly spoke, but her comment was subdued amidst the chaos of the debate of dominant castes.

Upper-middle caste people had higher administrative jobs and mobility for ages. For a Dalit student to converse outside her primal environment filled with stereotypes and marginalizing gazes is difficult. To rise from existential subservience to subjectivity is not easy for many Dalit students.

Our professor was trying strenuously to make the students understand the biopolitics of caste, but many students were rigid in opinions. I remember how another professor of mine once said to an ignorant student, “ I respect different opinions, but in this case, I disagree with your disagreement that is distanced from reality.”

It was very ironic how for the rights of the Black community and women, there was an uproar in the classroom but when it came to reservation students were divided in opinions. The class discussion ended with the negation of reservation rights of creamy layers and giving reservations to “right” people.

It is true that every year, many reserved seats remain vacant. But those who are here in your classrooms, are you sensitive and aware in your heated discussions to not discriminate against them?

No wonder the academic council decided to remove two Dalit authors- Sukirtharani and Bama Faustina Soosairaj’s works from the fifth-semester syllabus of the undergraduate English Honours course in 2021.

Also Read: Breakfast Babble: Why Do I Feel That The Culture Of Societies In DU Is Overrated?

According to upper-caste Hindutva traditions, non-veg consumption will hamper the purity of the caste. There is a sense of elitism which is present in canteen menus and judgment of people. In many DU colleges, non-veg is not allowed.

My professor once said how there was a partition in staff rooms during lunch breaks- indifference and supremacy of those who ate veg on one side and the other who hid their lunchboxes and were afraid of staining the tables.

I hail from Bengal, here we have never had any such discrimination based on food, at least not what I am aware of. My PG was shudh shakahari, anyone who bought non-veg will be banished! “Shudh”, is a word that denotes purity- purity based on the choice of vegetarian food here. I remember how many young girls sneaked in their food and hid packets.

Once I ordered kebabs from a restaurant to relish with my friends in college. In the sultry summer noon, when I was giving instructions to the delivery boy, random students sitting on the lawns were giving unsolicited scorns and sniggers to our faces!

I remember how we sneaked to the lawns behind college and ate in silence. Food shaming at once culturally, physically and socially shames a person. 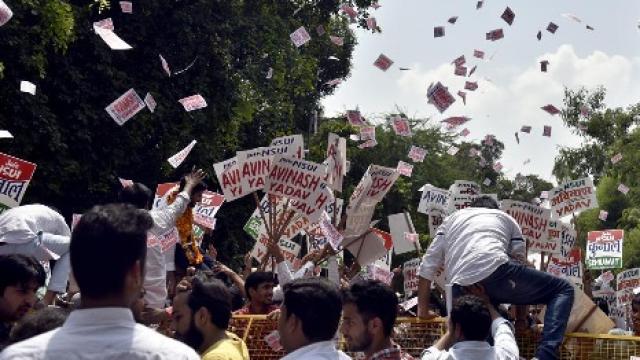 DUSU and individual college elections are extravagantly held in DU. Most candidates are from dominant castes. There is a universalized solidarity amongst the students hailing from the same region or caste. And the candidates have huge campaigning funds and are supported by state political bodies.

Thus here the economically and socially disadvantaged candidates- the Dalits seem diminutive against the rich campaigning of the dominant castes.

On-campus, you may often hear upper castes claiming their identities in banners, posters and conversations. Even while selecting members for DU societies, sometimes Dalit students are not chosen.

In varied pitches and indirect taunts, students from lower castes are marginalized. Many north-eastern students are passed racist comments and it is difficult for Dalit students to find lodgings on the campus.

In academic spaces, there is a need for students and authorities to be sensitive and be aware of the circumstances. There is a need to provide students from marginalized communities a space for free mobility of thought and opportunity.

In Pics: Five Indian Movies That Show Politics Of Food And Caste

Technology Natasha Lyons - January 11, 2022
Many people cannot live without Google Maps, especially if they are bad at remembering directions (like me). Technology has made everything so simple for...

Lifestyle Rishita Sengupta - January 11, 2022
Since time immemorial, people have been arrested by the myth that the British ruled India for 200 years. It makes it a neat 190...

Social Opinions Tina Garg - January 13, 2022
Breastfeeding is only associated with infants. It is after all hard to imagine an adult doing it, isn't it? But, just because something is...