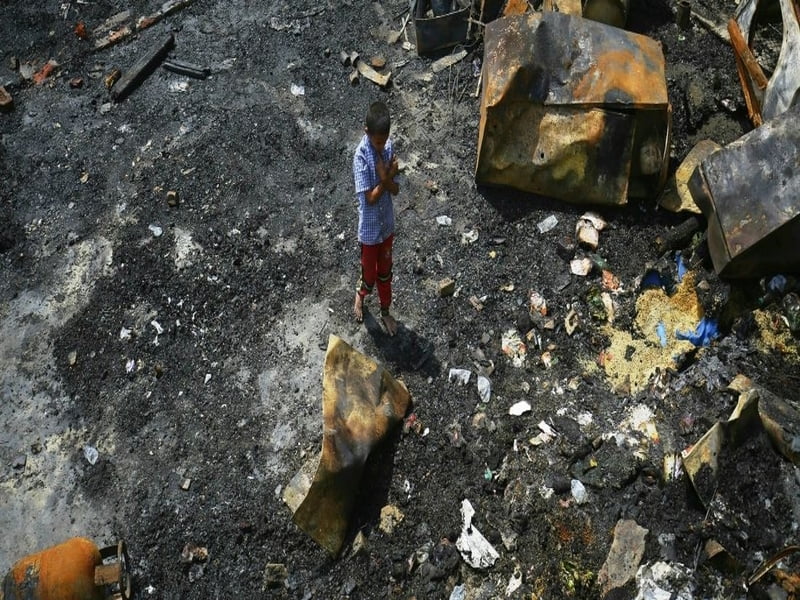 In the wee hours on Sunday, the refugee camp of the Rohingya community caught a massive fire. Located in the Kalindi Kunj area in south Delhi, the camp was home to close to 250 people. Within minutes, the fire spread across the camp, causing the residents to lose their shelter, with valuables, including their proofs of identity.

Who are the Rohingya?

Often described as the “world’s most persecuted minority”, the Rohingya are a stateless Indo-Aryan-speaking group of people residing in the western coastal state of Rakhine in Myanmar. The Rohingya population is denied citizenship under the Myanmar nationality law since 1982.

Military crackdowns on the community has forced them to flee to neighboring countries such as Bangladesh, Malaysia, Thailand and other south Asian countries. Why are they in Delhi?

In India, a charity organization that goes by the name of Zakat Foundation, helped the Rohingya set up a camp in New Delhi’s Kanchan Kunj area by providing them land. The foundation has even helped their children by paying the fees for their school.

Most men work as laborers in the local market or in small construction projects. They receive daily wages, which are stored by them in the form of cash as they do not have bank accounts.

Also read: When You’re A Refugee In Your Own Country : Demystifying The “Rohingya” Issue

How did the fire occur?

The fire was first noticed at around 3 am by a local student, who immediately alerted the police. The police arrived at the location within 5 minutes. It was the police that alerted the fire department. The fire brigade reached the stop at around 3:50 am. It took them 3 hours to douse the fire.

The fire began in a toilet in one of the corners, and soon spread onto all the 50-odd jhuggies in the area. It is believed that the cause of the fire could be a short circuit as the toilet had electricity connection.

“People from the adjoining areas came and tried to douse the fire with buckets of water but the tents quickly caught fire and were destroyed,” Hussain narrated the horrific scene to The Times of India.

The fire spread rapidly to all the shanties as they are made up of highly combustible materials such as tarpaulin and covered with plastics.

Is this the first time?

This isn’t the first time that a fire had occurred in this camp. There have been at least three incidents of fire, but none of them were as severe as the latest one.

“We have told them, there is lack of space and we have been building huts over huts because we don’t have space. We make these shelters with bamboo that can catch fire and can burn the entire camp rapidly. We have told the UN about the risks but they don’t do anything to help us. Why do they ask us then?”, Mohammad Jauhar told the Wire in a disgruntled manner.

According to the Wire, the UN representatives visited these camps in January earlier this year. They expressed their concern regarding the possibility of the Rohingya community losing its identity in case of a big fire. They even provided the camp with five fire extinguishers, but they proved ineffective this time.

Although the shanties are small in size, they are large in numbers. They are built side to side and back to back, within a limited space. The area per person is ridiculously low, thus making life in these camps tough.

What next for the community?

Although no person was reported to be injured, the residents lost all their belongings, including their savings and identity. Since they do not have bank accounts, they stored their daily wages in the form of cash in the camps.

They even lost their UNHCR (United Nations High Commissioner for Refugees) cards issued to them as a proof of their origin in the Rakhine state of Myanmar. Getting these cards re-issued is going to be another challenge for these people.

The Delhi Police, with the help of students of Delhi University and Jamia Hamdard University, will help the people in beginning their new life. They even arranged breakfast for them on Sunday morning, while cloth collection drives are on in Delhi University colleges.

As per the reports of Hindustan Times, Zakat Foundation has offered to rebuild then houses and set up tents. This time, however, they plan to  rebuild the camp with steel structures, not inflammable tarpaulin and plastic.

The refugees, which has around 100 women and close to 50 children, lived in practically inhabitable conditions. The biggest challenge that lies ahead for this community is to start their life again, from the scratch. Already thrown away from their own land, humanity needs to do its bit to help them settle again.

Reviews Brand Voice - May 17, 2022
After a gap of 2 years due to lockdowns and the coronavirus, the Versova Mahotsav resumed at the MHADA grounds Andheri west on Friday...