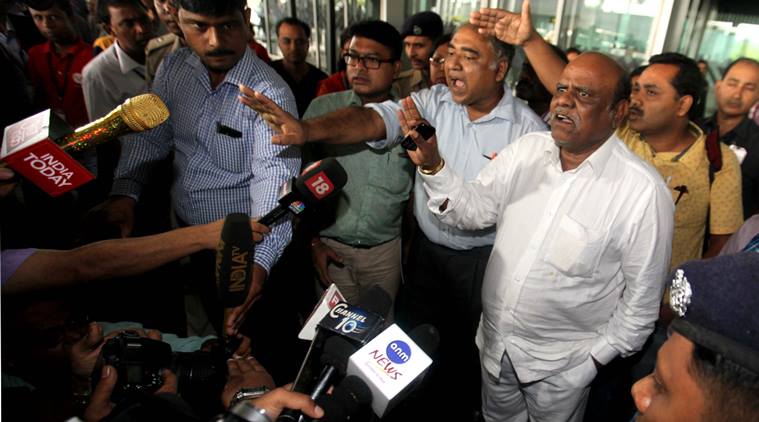 You might have read the name ‘Justice Karnan’ in newspapers more often than you realise. If you aren’t an avid reader, you definitely heard someone talk about him, especially after his arrest yesterday.

Here’s an ED special Demystifier around the ‘Justice Karnan Saga’ and what the entire hullabaloo is about.

C. S. Karnan is a retired Calcutta High Court Judge. He is the first ever judge who retired absconding, as a fugitive. A 7 judge bench had sentenced him an imprisonment of 6 months for contempt and asked the media to restrain from publishing his statements, earlier this year. You’d like to read: Life In Indian Prisons: Getting Pinched on Buttocks/Gang Influence/Horrible Food With Flies in It

His fondness for being in media began in 2011 when he complained of caste-based discrimination in judiciary. In 2014, Karnan alleged unfair selection of judges midst a hearing of PIL in the Madras HC. He wrote to Joint Registrar regarding this, post which 20 judges complained to CJI and asked for his transfer.

In 2015, living up to his name, Karnan filed a Suo Motu writ against Justice Sanjay Kaul regarding the appointment of civil judges. Aggrieved by the interference and the stay order passed by Karnan, Kaul moved to SC against him.

Meanwhile, Karnan wrote several letters to the CJI, the President and the Law Minister about corruption by the CJ and RG of Madras HC. Post this madness, Karnan was finally transferred to Calcutta HC to which he put a stay order and demanded a response from CJI.

In response to this, the CJI asked for a blanket ban on Karnan’s work from Madras HC. After the transfer, during demonetisation, Karnan wrote to PM Modi about corruption charges against 20 SC and HC judges. After which the SC filed Suo Motu contempt proceedings.

A 7 judge bench issued him a notice and put a stay on all his work to which Karnan alleged the SC of upper caste bias. Karnan did not attend the proceedings and demanded Rs. 14 crore compensation from the bench.

SC finally issued a bailable warrant and even asked him to present a medical certificate when he refused to challenge the arrest. Karnan then beat all levels of craziness and asked the bench to present themselves in his residential court for insulting him in open court and also issued bailable warrants against all 7 judges. He also ordered a CBI probe and directed the Airport Authority to not allow these judges to leave the country. After this, the bench gave out a hurried order punishing him for contempt for 6 months.

Karnan then absconded only to be arrested in Coimbatore taking aid in a private university’s hostel, yesterday, just 6 days after his retirement as a judge. He then filed for a bail plea to the apex court which was rejected earlier in the day.

How Does It Matter?

Now, knowing whatever happened in the past year or so, you might think that a HC judge went insane and so the SC punished him for his conduct. What’s the problem in this?

The problem lies in the mirror that our judiciary was shown by this case and what can be the implications of it. No one is going to defend Justice Karnan’s actions here. Whatever road he took to make a point is definitely erroneous. What baffles me is how the Supreme Court reacted to it.

A 7 judge bench ruled on Justice Karnan’s case which was an exception to the general rule. Like the Article 145 (3) of the Constitution points out, the case must involve “a substantial question of law” for a bench to have that number of judges.

How does Suo Motu contempt proceedings without a question of constitutional law justify a 7 judge bench? When the only way of removal of a judge is by impeachment, why did SC not advise the Parliament to start impeachment proceedings just like it has in previous precedents?

Agreed Justice Karnan chose not to appear before the bench but why did SC not appoint an amicus? After all, this was the first time they were convicting a sitting judge. They gave him a punishment of a maximum term possible and left him no option to be heard, why?

Also, the order was of 2 pages ending with “detailed order to follow”. So, basically the SC ordered for his arrest without even listing the reason behind? There is no scope of a judge to go against people up the hierarchy?

And the press was ordered to not print/show his statements? 7 judges of SC ruled on a matter of their own interest and there is nowhere to appeal against it, no recourse left?

If all this could happen to a judge of HC, consider the implications of such actions on the people in the country?

It is not the question of conduct that is baffling people concerned about law of the land but the fact that judiciary has made a joke out of itself in handling this matter.

You’d also like to read: Why Bhim Army Is Making The Right Noises