It is the birthday of probably one of the most popular and known person in the country, Mr. Narendra Modi.

Modi, who is now in his second term as Prime Minister of the country, having won the 2019 election, is pretty much a politician and a celebrity mixed together, considering the love and devotion of the people he enjoys.

So it was only obvious that 17th September being the birthday of PM Modi would be a big affair. We got a glimpse of it in the morning itself when almost all ‘India Trends’ on Twitter were filled with mention of his birthday. 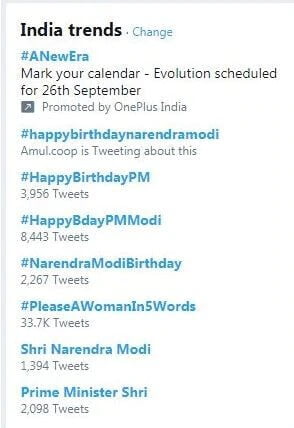 Here are some tweets that really caught our eye with the way they wished PM Modi on his birthday and at the same time added their own sarcastic or mean comment on things happening in the country.

A very happy birthday to PM @narendramodi ji.. good to see him by banks of the mighty Ma Narmada. While the bountiful rain is a blessing, don’t forget sir the number of villages who have been drowned out this year by flooding Narmada waters. Kahin Khushi, kahin gam..

Full Sardar Sarovar dam on Narmada means submergence of 180-odd villages and displacement of thousands of families in Madhya Pradesh. PM Narendra Modi finds it a rare opportunity to have his birthday picnic on the Gujarat side. What an insensitive creature!

All time high level of water in Sardara Sarovar dam may make PM Modi proud, but it is a cause of pain for almost 16000 villagers that have been evacuated. It is an other worldly dilemma to see what makes our PM happy is a cause of trouble for the citizens. @narendramodi #narmada pic.twitter.com/v8rrpqueEx

"Last month, Modi tweeted that he had “thrilling news”: the water’s level in the dam had breached the 134-m mark… However, more recently, he has been mum about the local families’ pending rehabilitation claims."

@narendramodi @myogiadityanath #69000_योग्य_शिक्षक_लाचार #savecutoff_90_97
Honourable PM Narendra Modi sir
Happy birthday to you sir…..
I would like to bring your attention towards #69000TeacherVacancy . we have been waiting for last 9 months for our job. please help us.

Read More: In Pics: What Would It Be Like If PM Modi Went On Koffee With Karan

Which is great because in Bombay it would be really tough to find 700 people not into politics or advertising.

While @narendramodi is celebrating his birthday along with @vijayrupanibjp at Sardar
Sarovar, thousands of families are getting submerged. Modi’s birthday has become
Narmada Valley’s funeral. #SharamKaroGateKholo

Seeing all this did make me wonder if even on a birthday such comments are warranted or not. However, after some deliberation it occurred to me that it’s okay to take PM Modi’s case even on his birthday as long as people don’t take too much offense.

It should all be taken in good spirits and also one should understand a little as to where people are coming from.

Because sometimes his actions do call for people to take a jab at him and rightfully expect some answers to things that are not cleared up.

Even though I do think he’s doing a lot of good work for the country and his good intentions are there, but since he is not answering the right questions or clearing the confusion in the citizens’ minds, there is a lot of chaos at ground level.

PM Modi is fully out there and yet at the same time he is not. Most of the time he is travelling and in the time he does spend in the country, he is not really giving concrete answers to the many problems people are experiencing.

But let me pose this question to you… the readers. Is it okay to make sarcastic wishes or comments on a public personality’s birthday? Let us know in the comments below.