Bollywood actress Swara Bhasker has always been in controversies due to her outspoken and blatant disposition.

While most of the time she is being targeted for her left-wing activism or bold comments on politics and government, this time it’s a little different. 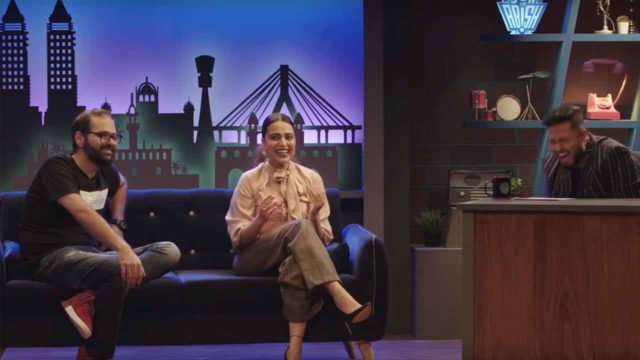 The story goes with the actress narrating one of her experiences of her ad shoot for a soap commercial.

She goes on by telling us how she encountered an irksome kid on the shoot who addressed her as an ‘aunty’. The 31-year-old actress mentions how indignant she felt after hearing the same and goes on mocking the kid.

In the video that went viral on social media, Swara Bhasker is seen addressing the child as ‘ch**iya’.

Justifying the same, she adds that – “children are evil.”

She further adds that the kid was very annoying and constantly cribbing about going to the bathroom.

She tells us that since nobody was paying heed to the kid’s hues- she felt ‘pity’ at him and asked someone to take him to the bathroom. But it was too late as the kid relieved himself in the tub designated to be used in the ad shoot.

Disgustingly recalling the entire incident, she ends up calling the same kid, ‘a kam**na’.

Here’s the video link to the same episode-

The Consequences Of Her Actions

Soon after the episode was aired on the Internet, the actress got brutally targeted on social media. Twitter was flooded with tweets and comments that trolled the veteran actress.

Unlike Swara who felt ‘pity’ on the kid, the netizens are slamming her on social media bluntly!

A Twitter user trolls her by making a 3 year old write “Swara Aunty” and tweets it from his handle.

#swara_aunty I got it written from a 3 year old. pic.twitter.com/mUSBnh5hxR

Another one criticizes her bluntly and considers charging her for her behaviour.

Not only this, according to a report, an NGO called Legal Rights And Protection Forum has filed a complaint to National Commission for Protection of Child Rights, demanding strict to be taken against Swara.

Also Read: Dear People Trolling Swara Bhaskar, Why Would You Even Go Watch An Adult Movie With Your Grandmother In First Place?

Making good use of the situation, BJP worker, Akash Joshi also complained against the actress to the National Commission for Protection of Child Rights and tweeted about the same.

Considering the actress’ involvement in politics and consistent activism, the social media backlash over an unacceptable comment is pretty much expected.

However, before the matter takes a political turn and becomes a personal attack, I feel more concerned about the context in which the statements were made.

The fact that the comment was made on a renowned ‘comedy show’ in the presence of two amazing comedians worries me.

Moreover, if you closely observe the video then you would realize how the audience also burst into laughter when she called the kid a “ch**iya” which means it sounded funny to them.

There was another bout of laughter followed by an affirmative response by the host and audience present, when she said –“children are evil.”

The video is not just about an actress humiliating a kid but also hints at us about the deteriorating level of humour in our country. Comedy these days is more like roasting people and being mean towards them in an offensive way which is worrisome.

But are we now going to target 4 year olds?

The fact that the incident took place in front of one of my favourite comedians- Kunal Kamra, saddens me more than anything else. These people are considered to be sensible and responsible citizens of the country.

When such unacceptable remarks are welcomed by the said ‘sensible people’ of the society and are celebrated humorously; one becomes skeptical about their credibility.

Moreover, it is alarming to see that there is a group of people who enjoy such kind of comedy and call it humour. It certainly talks about the degrading level of humour in our country and unfiltered expression of speech that consequently promotes unnecessary chaos.

With this incident in limelight, I would say that being a public figure, civilized behaviour is expected from you as it’s more about representation than about individuality.

Has Stand-Up Comedy In India Reduced To A Joke?