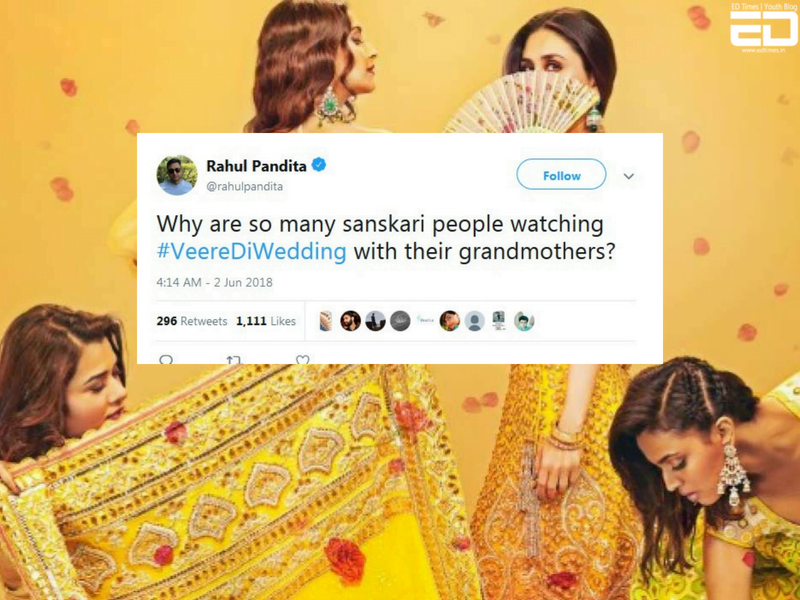 I have a question for people trolling Swara Bhaskar for VDW.

The movie is a certified Adult movie, the A rating clearly specifies it has some content which is only meant for adult audience. Moreover, the trailer obviously shows glimpses of such scenes then do tell what would make you watch it with your grandmother in the first place?

For those of you who aren’t aware of where this argument is going, let me update you a bit.

Many reviews aired saying that the movie has sexual content and abuses so no one should watch it.

Others read that they felt embarrassed watching the movie with family.

Now, these arguments are problematic on way too many levels.

First and foremost, why would someone watch such a film with family in the first place? I mean most of us have grown up watching Hollywood chick flicks and I am pretty sure none of us made our parents or grandmother sit with us to watch such movies.

There is a reason why movies are certified as Adult movies by Central Board of Film Certification (CBFC). One cannot blame the actress, the movie or the entire film industry for one’s own ignorance.

That’s like eating a food product after expiry date and blaming the company for it even when the product clearly has a warning of not being consumed after the said date.

Also, read: All Women Centric Films Don’t Need To Be About Empowerment Always: Stop Bashing Veere Di Wedding For Being An Entertainer

Moreover, movies like ‘Kya Kool Hai Hum‘, ‘Masti‘ and ‘Mastizaade‘ had much crass adult humour than VDW, then why diss Swara or VDW for it when no one objected to these movies or the actors on their release.

Were your grandmothers not interested in watching these movies?

I haven’t watched the movie as of yet and the reasons that people have been giving for not watching it are baffling me. IMDB is full of such stupid reasons and abusive trash in the reviews by audience. Don’t know where all the ‘maryada’ goes while writing such reviews which aren’t reviews but plain trolling.

Burner accounts with exact same tweets showed how IT cells were purposely posting trash to troll Swara. ALSO, IDK why us millennials think low-key of our grandmothers. I mean come on, if it wasn’t for them would you even be sitting here reading this?

So dear paid trolls, it’s about time you grow up. If you don’t, you’re gonna grow up into a grandmother who’d want to watch an ‘Adult’ movie only to thrash it for it’s content!

Okay brb, booking tickets for VDW. PS: I’m Hindustani and I am not ashamed of Veere Di Wedding.