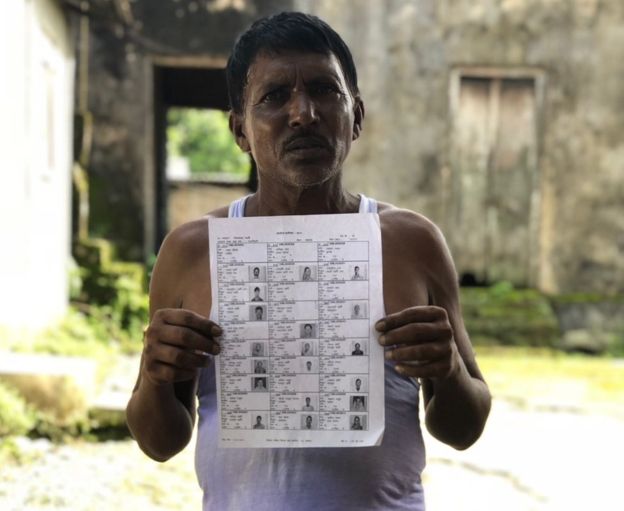 With the fear that is brewing in the country over the continuing takeover of Bharat in the economic and cultural sense, Assam’s NRC (National Register of Citizens) has triggered a turmoil targeting the weakest members of religious and linguistic minorities in the name of a justice-delivering mechanism.

Over 3,000 Bengali Muslims were murdered during a period of six hours in a village called Nelli on 18 January 1983. The last such attack took place in a village near Manas National Park in May 2014 where 38 people including children were shot dead.

These gruesome attacks that were repeated saw no action taken against the perpetrators who got away by branding the victims as illegal Bangladeshi immigrants.

With the External Affairs Ministry vested in conducting “Operation Insaniyaat” for Rohingyas in Bangladesh, there seem to be unavailing hopes for insaniyaat to the vulnerable Bengali Muslims, called “Miyas” in the state.

The History of NRC: Weeding Out Illegal Migrants In The State

The National Register of Citizens (NRC) is a list maintaining the record of all legal citizens of a state.

As per NRC, citizens have to submit a list of about 14 documents like land tenancy records, certificates of permanent residence and passports to prove that they came to Assam by 24 March 1971, a day before Bangladesh became an independent country.

This list has been updated for the first time since 1951 when there were vast exchanges of the population across the Indo-Bangladesh border during Partition.

The handiwork of NRC was first laid down by Rajiv Gandhi through the Assam Accord of 1985 demanding identification and deportation of illegal migrants in the State.

Assam has witnessed militancy in its soil by ethnic nationalists who justified their armed insurgencies by suggesting reasons defined by fears about “demographic change” and indigenous homelands taken away by outsiders.

The outbreaks of violence that swept the state since the last four decades with the Nelli Massacre of 1983 and the Kokhrajar killings of 2012 has become a mere tool for the local politics here.

With the politicians using fear to change electoral polls by uniting the natives against the “illegal Bangladeshi immigrants”, there were demands to update the list seeing the massive drove of immigrants entering the State from the leaders of indigenous communities.

The Supreme Court decided to monitor the exercise that has been updated by Hajela and his team of government officials by outlining the timeline on which Assam should publish its final list.

Ever since the BJP came to power, there were reforms in the Bharatiya Janata Party’s (Amendment) Bill seeking to make it easier for the Hindu immigrants from Bangladesh, Pakistan, and Afghanistan.

This move seems to undermine the terms of NRC which states that religion will not come into play while deciding a person’s citizenship.

Kamala Begum who is a woman in her late 50s is the only woman to be declared as a foreigner among nine children. She has been detained in the jail after she was declared a foreigner under the Foreigners (Tribunals) Order of 1964.

Kamala Begum was a daily-wage laborer before she was arrested without any notice to her family members who didn’t have any idea about her whereabouts for two months.

Before she was arrested, the tribunal had asked her to furnish documents about her paternal lineage.

You Can Also Read: Most Of The Bidi Rollers In Bengal’s Murshidabad Are Child Labourers Trapped In The Cycle Of Poverty

After Begum submitted her voter’s list from 1965 and 1997 which mentioned her father Dhania Mia, they found a discrepancy in the name of her father listed as “Abdul” in the 1965 voter’s list and “Latif” in the other.

Although Begam had filed an affidavit stating that “Abdul” and ‘Latif” belonged to the same person, the tribunal member didn’t make any effort towards correcting her father’s name in the voter’s list.

The fact that Kamala was poor and illiterate to correct her father’s name in the voter list seems to have slipped the minds of the authorities.

Like Kamala, there are many women listed as “D-voters” or doubtful voters who married young and moved to other villages who fail to prove their records providing their places of birth and their families.

Many Bengali origin Muslims live on fertile sandbars of the Brahmaputra which get submerged during floods.

With them moving out of their dismantled homes built out of corrugated tin sheets, they are considered illegal just because they were forced out of their old shelters.

What Will Become Of The Immigrants?

The NRC State Coordinator has made it clear that people who couldn’t find their names in the NRC list can reach out to their respective Nagrik Seva Kendras (NSKs) filing their claims between August 30 and September 28.

We are yet to see whether Bangladesh who is already providing refuge to the massive influx of Rohingyas fleeing Myanmar will accept the request to take back people who have been declared stateless in their country.

Much to the promotional song posted on Facebook by the NRC itself, the witch-hunt to defeat the alien enemy does little to calm the nerves of people like Kamala who have limited means to understand the verification process and submit the right documents while being separated from their family members in the state.