India’s journalists have a tough job. They are generally underpaid, overworked and often at the risk of being physically attacked.

Compiled by Reporters Without Borders (RSF), the 2020 World Press Freedom Index, which saw India’s rank slip to the 142nd position in a list of 180 countries, is indicative of the culture of fear and threat that has become common in the press landscape in India. 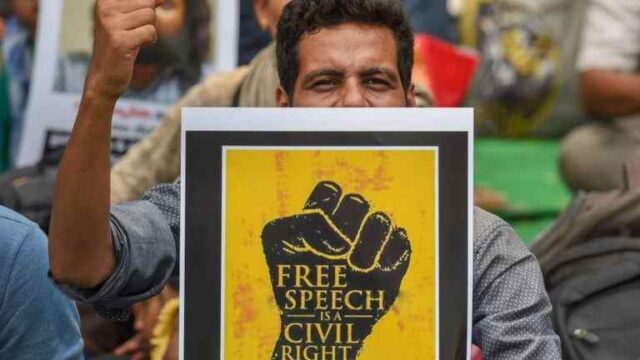 “There have been constant press freedom violations, including police violence against journalists, ambushes by political activists, and reprisals instigated by criminal groups or corrupt local officials,” said RSF.

The index does not take into account the quality of journalism, it looks into the freedom that the press has in a country.

Here’s a look into some instances in recent history that justify India’s ranking on the index:

SLAPP Against The Wire, NDTV And Others

In 2018, Reliance Infrastructure, owned by Anil Ambani, filed a lawsuit against The Wire for Rs 6,000 crore for its reportage of the Rafale deal controversy. 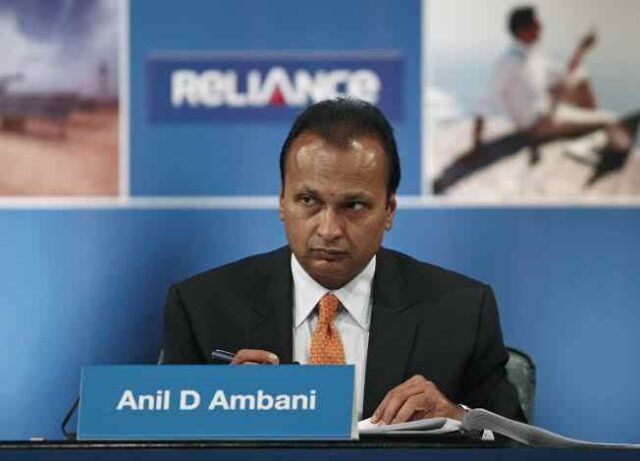 In addition to this, four Anil Ambani-owned ventures had filed 28 defamation lawsuits in 2018 alone, most of them against media organizations.

Ambani also went after NDTV, slapping them with a Rs 10,000 crore lawsuit for its reporting on the Rafale deal. The Telegraph even called it “the largest defamation blitz in recent memory in the country.”

Lawsuits such as the ones mentioned above are called strategic lawsuits against public participation (SLAPP). The person filing such lawsuits knows that chances of them winning the case are slim.

But winning such cases is not their goal to begin with.

Such cases stretch out for years, with mounting legal costs having to be covered by the accused until they eventually give in to the threats. The goal here is to silence critics, intimidate them to stifle dissent in public, so much so, that critics would think twice before criticising anyone on a public platform. 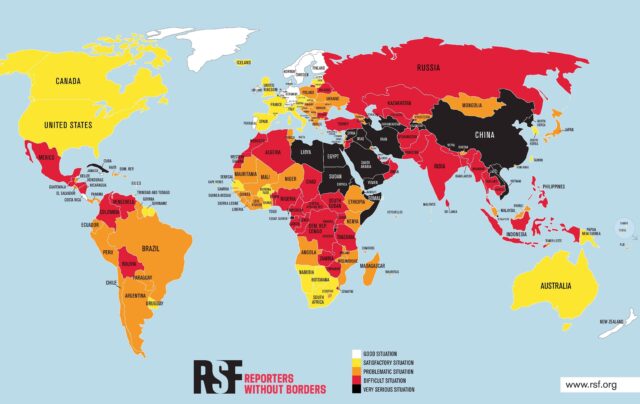 Bushra Sheikh, a BBC reporter, was covering the unrest at Jamia Millia Islamia which was sparked by the Citizenship Amendment Act in December when she was attacked by the police in Delhi. This was just one of the many ways the Delhi Police poorly dealt with the anti-CAA protests. 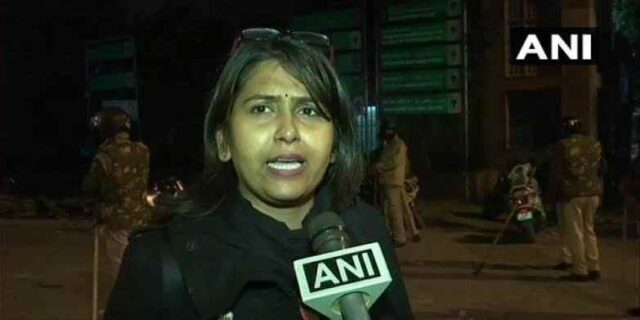 “The police took away my phone and broke it. A male cop pulled my hair. They hit me with a baton and when I asked them for my phone, they hurled abuses at me,” said Sheikh.

We’ve all always known Delhi is not the safest place on Earth for women, but it’s chilling to know that even women who are doing their damn job to report injustices would be subjected to arbitrary attacks by authorities who are supposed to protect, not to provoke.

3 Caravan journalists were harassed, manhandled and assaulted by a mob in northeast Delhi in August 2020. This already depressing news gets even worse when you find out that the mob became violent after learning that one of the journalists was Muslim and the police acted as mute spectators as the harassment continued. 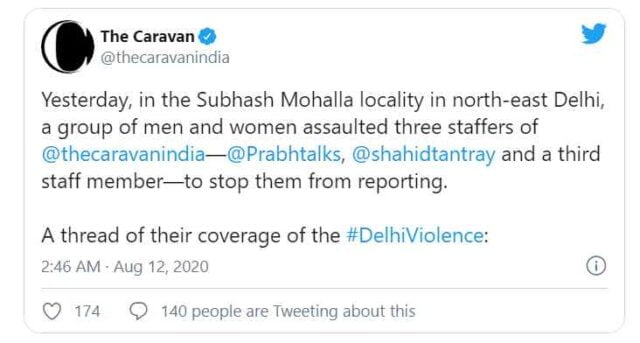 The reporters were doing a follow-up reportage months after the February riots in Delhi. The mob took offence to their reporting and were forcing them to delete the footage and reporting they obtained.

A female journalist was subjected to sexual harassment, a middle-aged man even allegedly flashed his genitals at her as the 3 journalists tried to escape the mob.

When the lockdown began in India to combat the coronavirus pandemic, members of the press were classified as ‘essential workers’ by the Centre, allowing them to circumvent the lockdown restrictions.

Unfortunately, surprising no one at all, journalists across the nation were on the receiving end of harassment by the police, who seemed to have gained impunity in the lockdown period. 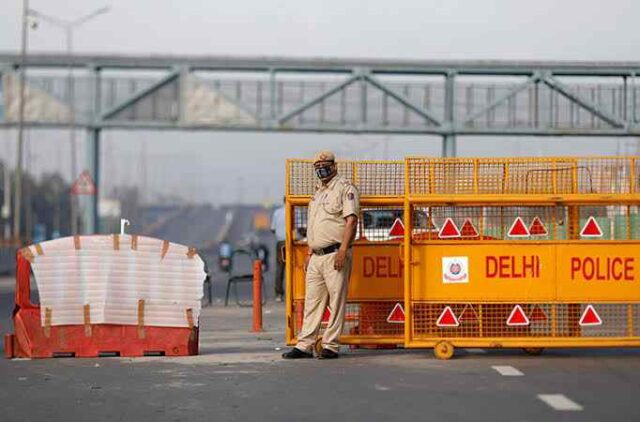 Even in metropolitan cities like Delhi, Mumbai, Hyderabad, amongst others, journalists were beaten, chased and generally impeded from doing their job.

The Hindu’s Hyderabad bureau chief Ravi Reddy was pushed against a car and grabbed by the neck. ET Now’s Deputy News Editor Uttkarsh Chaturvedi was beaten with sticks and had to race to his bike. Aaj Tak reporter Naveen Kumar was beaten up by cops in broad daylight while he was on his way to the office.

Between 25th March and 31st May, 55 journalists were threatened, harassed and intimidated from doing their jobs, according to a report by Rights and Risks Analysis Group (RRAG). Uttar Pradesh led the list with 11 cases. 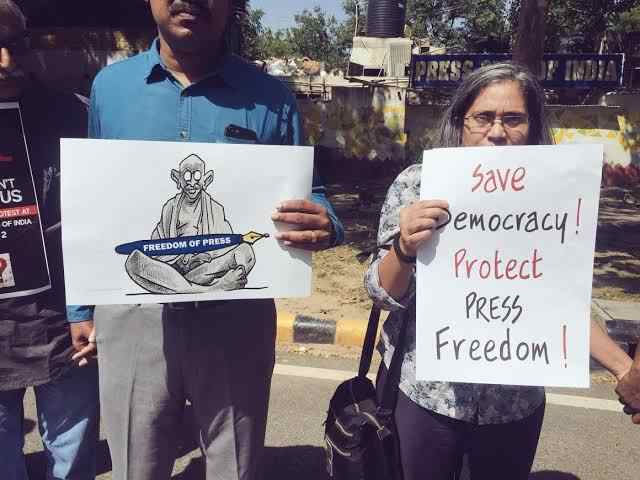 “About 55 journalists faced arrest, registration of FIRs, summons or show causes notices, physical assaults, alleged destruction of properties and threats for reportage on COVID-19 or exercising freedom of opinion and expression during the national lockdown,” stated the report.

The fact that such attacks can happen, and that too with impunity, is indicative of India’s further inevitable drop in the Press Freedom Index ranking. Clearly, India is a restrictive nation for journalists.

We can all drone on about the quality of the press but how can the situation get better when the ones who try to get the facts and do quality journalism have to risk their lives every single time?