Dark is beautiful of course but not when it comes to our gods. Our gods, that we worship and consider to be the beginning and end to our universe, are expected to be white as milk.

See, even till now, we have the notion that white or fair skin is better than dark skin, which is just further imposed by our very dear advertisement industry, with Fair and Lovely being one of the most popular face-cream brands in India.

Marriage ads have requirements for a ‘fair-skinned girl’; parlour staff, mothers and relatives still pester girls on how to lighten their skin, and India is still obsessed with white skin, but perhaps one area where not much attention is given is to how our gods are represented.

Most of the times, our Indian gods such as Lakshmi, Saraswati, Ganesh, are shown as quite light-skinned in pictures and idols, with a majority being female.

There are a few dark-skinned gods like Shiva, Krishna, Kali and such, but most of the times even their skin is lightened to show a slightly blue-ish colour instead of dark.

However, in a ground-breaking move, a Chennai-based photographer, Naresh Nil came out with a photo-series in December 2017, that reimagined Indian gods with a dark skin.

Creative director Bharadwaj Sundar worked with Naresh on this project.

The series was named ‘Dark Is Divine’ and from September 2017 till the next 2 months, they created about 7 portraits, each featuring a different god.

Sundar stated that the reason for doing this series was the widespread acceptance of Indian gods having light skin colour. After observing a photo in his house, the idea was formed and he added that, “Whether it’s temples within our own homes or the pictures of gods at a barber shop – they are all the same. All of them show gods who are fair.”

Nil on the other hand gave his reason for doing this series as, “Our idea was born out of this very notion of acceptance of fair as divine, which to me is more about normalisation of this concept in society.”

Apparently, it was not just the gods who had to be dark skinned, but the models portraying them also had to comfortable with their complexion.

Nil said that, “The most essential consideration was whether the models themselves were comfortable in presenting and associating themselves with the representation of their skin tone.” 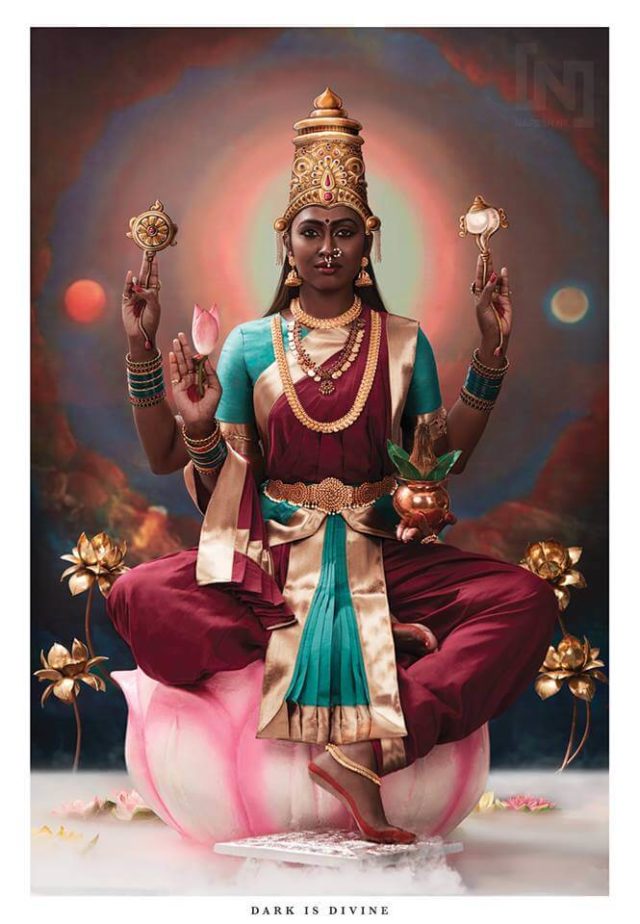 The image of Lakshmi sitting in her iconic setting on a lotus is highlighted further when you see the dark colour of her skin. It contrasts a lot with how she is normally presented in other areas with light to almost white skin.

Model Suruthi Periyasamy was chosen to represent Goddess Lakshmi and she does full justice here.

Another reason to do this series was to increase relate-ability with our gods. Sundar said that, “Everyone here prefers fair skin. But I am a dark-skinned person and all my friends are dark-skinned too. So how do I identify with fair-skinned gods and goddesses?” 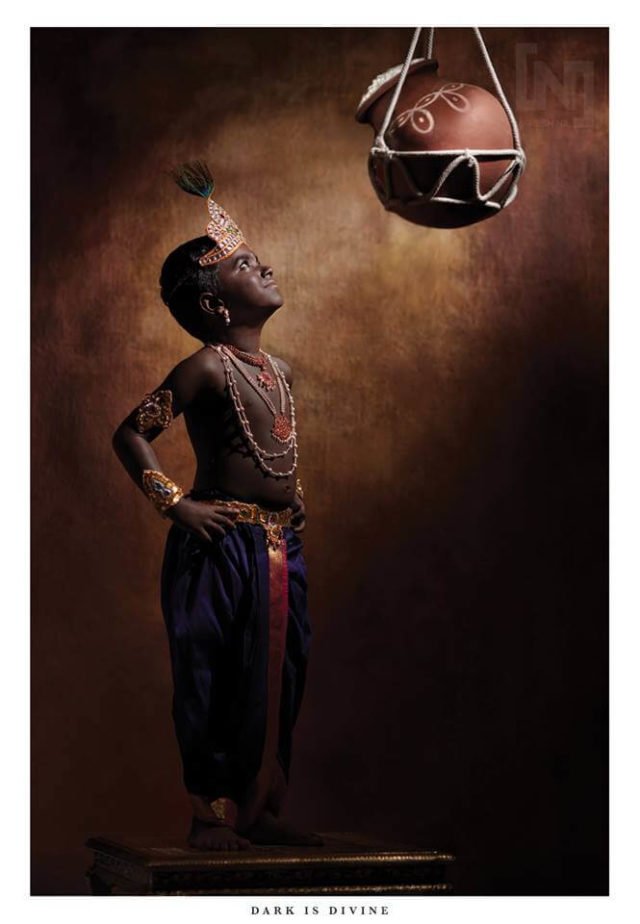 Krishna is canonically known to be dark skinned, in south India many of his idols are created from black coloured material, but even then his complexion is sidelined.

In many photographs and figures, he is often given blue coloured or sometimes fair skin which is not right perhaps. 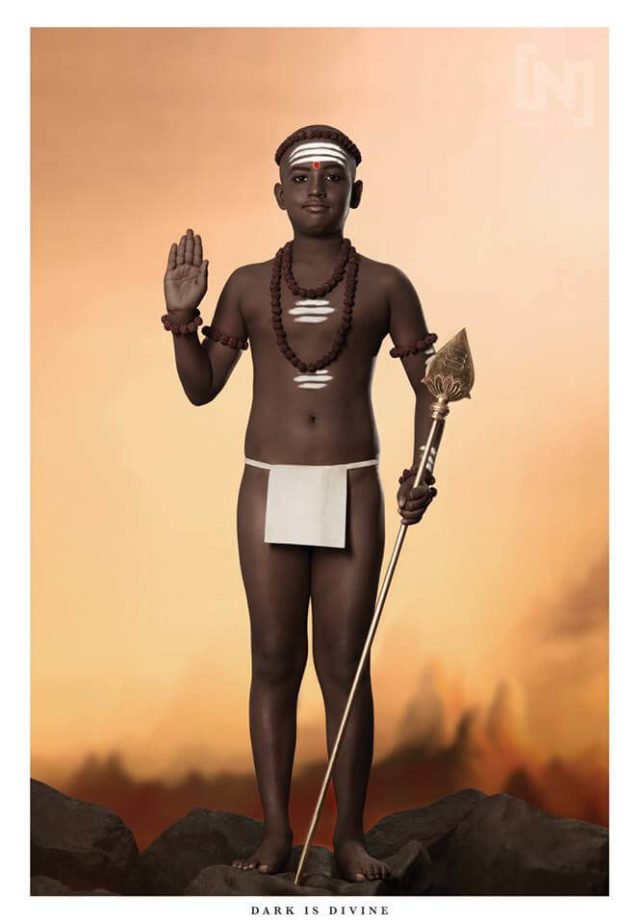 This image is that of Bala Murugan, an avatar of Subramanya who is often depicted with flowing black hair and extremely light complexion.

Apparently, Naresh and Bhardwaj had planned to showcase 12 Gods and Goddesses, but due to time and budget constraints they could only do 6. 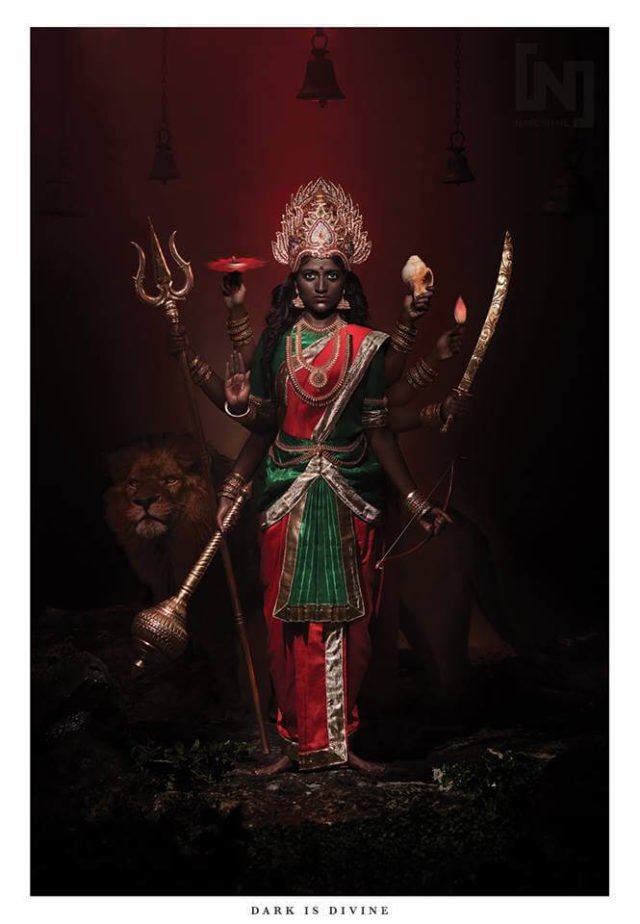 There were some people who felt that there was bias being shown by portraying Kali as dark-skinned, but even in that, there is not much wrong here.

Also, many of the poses, styles and visualisations of the images were inspired from that of Raja Ravi Verma’s portraits.

Naresh in reference to the use of Verma’s paintings said that, “Our focus was plain and simple, how are Gods or divinity presented in common culture, and by common we mean our immediate surroundings, whatever we come across in our everyday life.”

Read More: That So Called ‘Scary Thing’ Is A Popular Deity From Kerala: Theyyam: Demystified 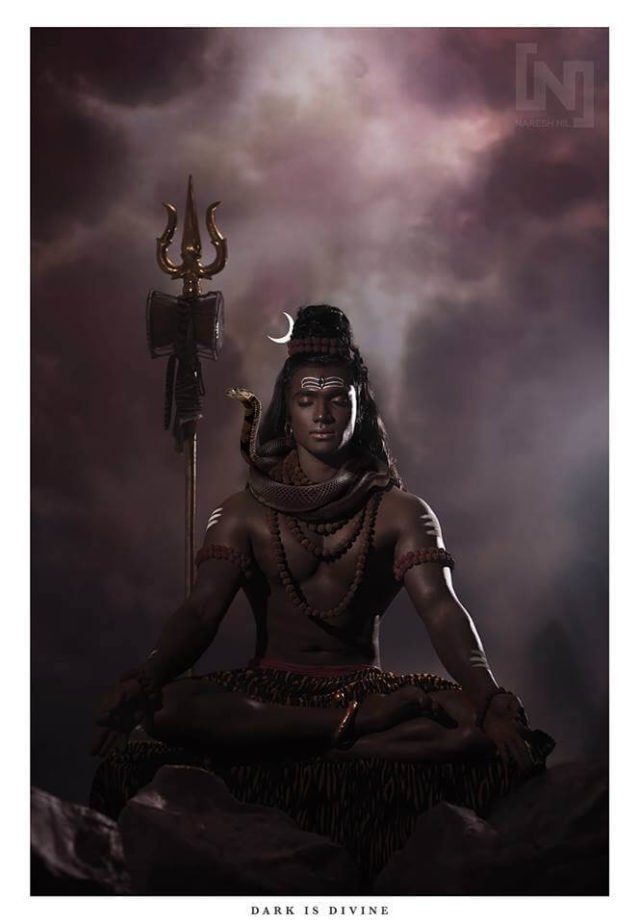 Instead of taking known models, the duo recruited unknown models who could match their requirements and give it a more real aesthetic.

Shiva who is depicted here, is known to have slightly dark skin, with him also being called ‘Neel Kanth’, but in family portraits with Parvati and Ganesh, his complexion is often changed to being lighter than it should be or made to look blue. 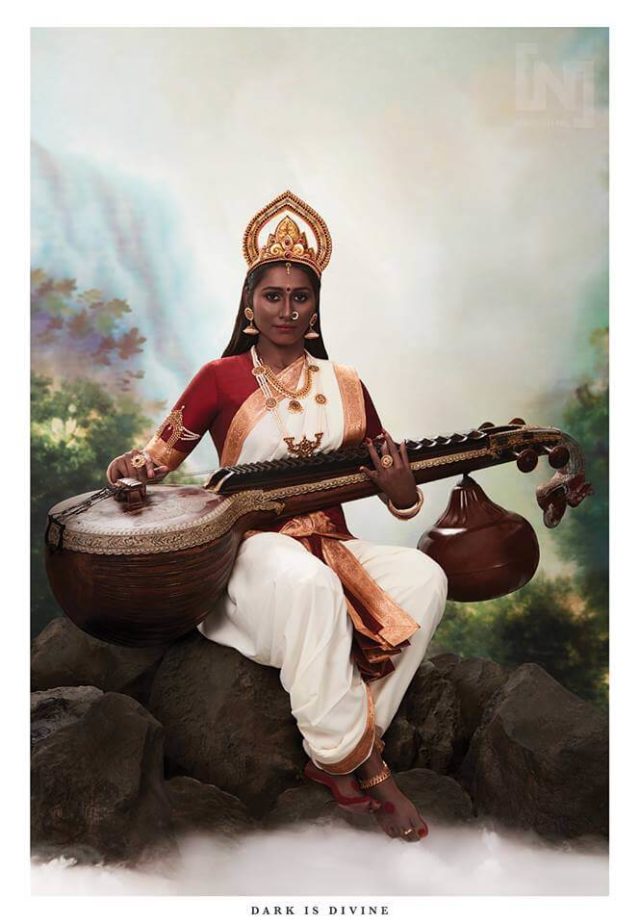 This image of Saraswati having dark skin was the most striking, since she is often portrayed as having completely milky-white skin.

Bhardwaj said that, “The ultimate victory for such a project would be if someone printed one of the photos and perhaps added it to their place of worship in their home and prayed to that god.” 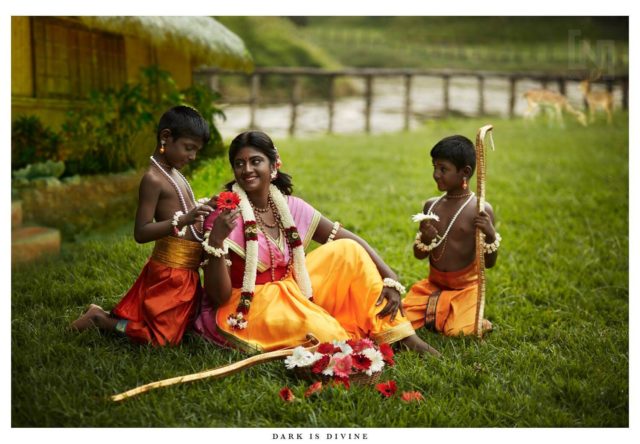 This image of Sita with her sons Luv and Kusha was not initially going to be in the series.

But their make-up artist Sridevi Ramesh who created the looks of all the Gods and Goddesses in the photos requested that one more image be added and it was this one.

Aren’t you in love with these pictures already? Tell us your view in the comments below.