If you’ve been to websites that give itineraries about Kerala you might have come across a  man with a painted face and dressed in the strangest attire that you’d have ever seen.

Fiery eyes with an intense look that can create fear in minds, a crown made of coconut leaves, flowers and silver adornments enhancing the royalty and an aura of a spiritual entity within.

Well, that my folks, is Theyyam, the religious art form that has been prevalent in the North Malabar region of Kerala since time immemorial. 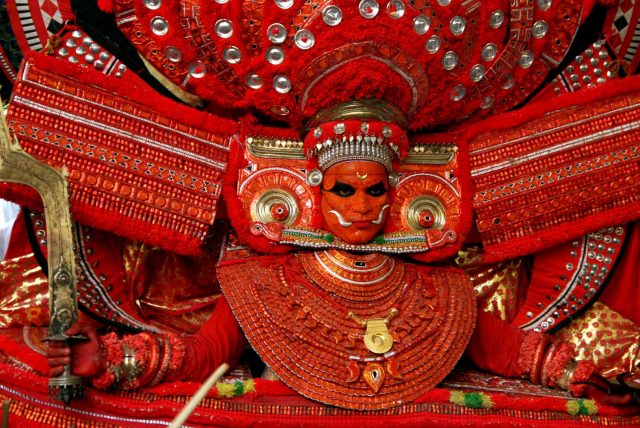 How did it originate?

The feudal caste system in India hasn’t been something to be proud of. But surprisingly enough, that was the reason why Theyyam came into existence. Well, according to the feudal lords, the so-called lower castes were filthy so as to worship the Gods.

So, they devised their own method of devotion; Theyyams depicting either the stories of yesteryear warriors or martyrs who were considered God-like or their own personalized form of the Aryan gods; their main motive being disguising men as God and instilling fear and religiousness in the minds of people.

Read More: Supreme Court’s Judgment On Mixing Religion With Politics: Will It Be Effective?

How and when is it done?

I had the chance of a lifetime to see this live. The programs that start off in December end by the month of March.

And having a “kavu”, a small temple where the Theyyam performs, in the vicinity of my home gave me the opportunity to watch from the very beginning to the end. Though the whole thing is very long and you can enjoy only when it is live, here’s a video to give you the hang of what it is about. 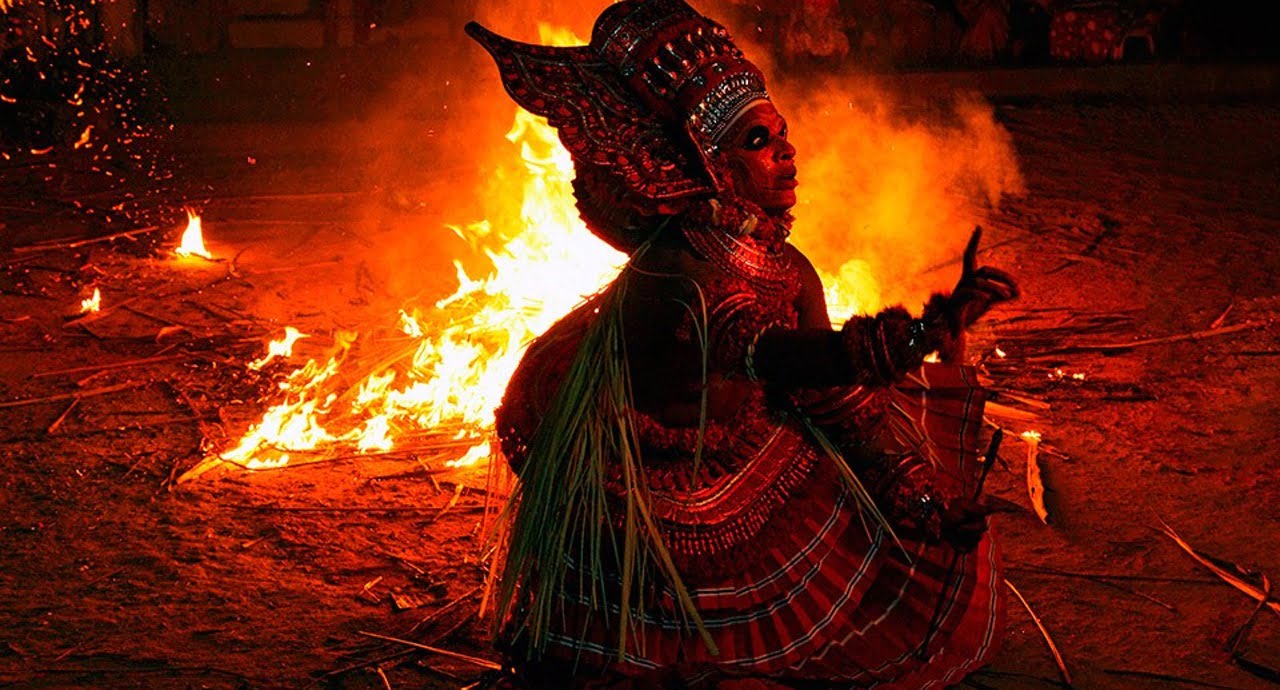 The performances never fail to create a feeling of awe within a spectator. The otherwise normal men, look no less than religious deities.  After the enactment is over, the deity comes over to the crowds and gives blessings to people one at a time.

Once when I had gone, the deity said, “It’s only a matter of time, it will leave and everything will be alright.”

Though I didn’t actually understand what he meant to say, something stirred in me. A small ray of divinity? Who knows?

Why should you know about it?

Whenever I show a picture of Theyyam to my friends, mostly the instant reaction is, “Hey, why does this man have his body painted in red? He sure looks scary!” or “What’s the thing with the weird costume and such a big head gear?” I am not blaming guys, but we ought to know about the lesser known art forms in the country.

It’s not just about knowing them, it’s also about the stories of our ancestors, the legacy that our parents have carried forward and what we need to show the next generation. And that’s exactly what I am trying… well, seems to do… So, if you ever visit Kerala, do not miss this visual feast. Trust me, it’s going to be worth it.

You Might Not Notice But Media Can Make You Look Like A Dummy: Rise Of Media Influencers