Irrespective of the century, feminism has always been looked down upon and trolled. Feminists have received similar hatred throughout the space leading to relentless opposition.

These opposers have self-assumed that they are the cream layer of the society and thereby their arrogance and blatant support for patriarchal society knows no bounds.

This brings me to the concept of patriarchy. Patriarchy has, since times immemorial, reigned over the earth and influenced most, if not all, spheres of life. The ruin that has been caused and the doom that has been rendered has shown just how crucial feminism was, is, and will always be.

India is a land of faith. All deities are worshiped with equal zeal and belief. Despite the patriarchal notions and male-favoring society, Indian mythology has gods and goddesses wherein no differentiation is done amongst the genders.

Female deities receive much more appreciation and respect than their male counterparts.

Herein, we will look at a few women feminist icons from the Indian mythology who either got sidelined because of the then-pressing issues, or because of not getting enough credit for all that they strived for during their times.

An epitome of self-sacrifice and purity, Sita Mata has always been considered of great importance when it comes to Indian mythology.

Wife to Lord Rama, abducted by Ravana, Sita Mata did not waver for a single moment from her righteousness. She abided by her morals and resisted all advances by Ravana with utmost resilience.

A single mother of two, Sita Mata brought up her sons (Luv and Kush) in the middle of a forest in an ashram. This brave and confident woman did not let the burden of the society (present now as well) affect her or her sons’ lives.

She followed her husband to his 14-year long exile without a word, crossed Lakshman Rekha as per her will, refused to return to Lord Rama along with Hanuman (fought for her self respect), and went underneath the earth, ie, gave up her life to save her respect and dignity.

As opposed to common belief, Surpanakha was not a villain. She was held responsible for the cause of Sita’s abduction and thence the war between Rama and Ravana. But the truth remains, that Surpanakha solely dared to control her desire and sexuality in a society that, to date, loves to restrain such free will.

Her openness about marriage and putting forth the wish to marry one of the sacred brothers were rewarded cruelly. Stereotypically patriarchal mindset looked (still looks) for verification of the character of a woman to give her due respect.

And god forbid, a woman expresses her desire and sexual needs amongst the misogynistic society. Hence the name-callings and blatant disrespect. 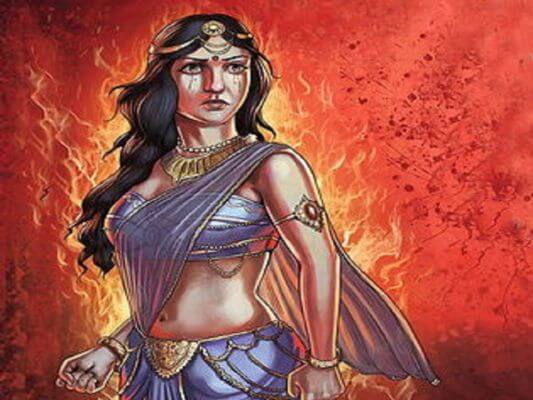 Despite the upsetting conditions, Draupadi refused to be a damsel in distress. She never let the ill-fate of her husbands (she was married to 5 noble brothers) and family rob her of self-respect and dignity.

This distinguished woman swore bloody revenge for the disgrace she had to suffer under the hands of the numerous abusers. To top it off, these abusers were her extended family members. Such confidence that she swore to wash her hair if and when Dussashan’s blood was available as shampoo.

She used to advise her husbands regarding political matters and her decision to accept polygamy, although looked down upon by society, was truly commendable.

She held utmost power and took the monster Rakhtabeej head-on. Her anger and bravery knew no bounds. Women are always taught to talk, sit, and act modestly and this ‘modesty’ is along the lines of patriarchal whims and whimsical.

But goddess Kali threw all these conventional norms down the drain, accepted and showed her real, true self – dark, brave, powerful, strong-minded., disheveled, and daring.

Patriarchally speaking, ‘Sati-Savitri’ has always been a term used to refer to women who are prim and proper. But this misinterpretation of these two strong, feminist women has cost us a great deal.

Sati, against her father’s orders, married Lord Shiva, the all-powerful deity, thereby showcasing her daring and brave persona. She chose to love and marry the person (god actually) of her choice.

As for Savitri, the strong-headed woman fought with the grim-reaper (Yamaraja) to demand her husband’s life back. She showcased divine love and dedication and thereby proving to be a true feminist. Not fearing the grim reaper himself.

All of the above women have been true role models and have given us so much to look up to. These strong feminists never backed down from expressing their desire, love, wants, and needs and did not fear either the society or the patriarchal mindsets. Nor did the societal pressure get them to mend their ways without consent.