HomeFinanceHow Will The US Election Impact The Stock Market?
Finance

How Will The US Election Impact The Stock Market?

The news stream in the last few months has shifted from the spread of COVID-19 to the devastation of the global economy. In late May, there was another shift to the killing of George Floyd, and the protests and looting across the United States. In mid-June, the markets shifted back to thinking about a second wave of the coronavirus, with an eye on the US elections. What is clear is that the market expects volatility. The market also now expects Joe Biden to win the election, but it’s unclear whether the change in tax policy is priced into the broader indices.

Most of the national polls show Joe Biden with a double-digit lead in the national polls and winning in nearly all of the battleground states. There is still more than 150-days until the election, which gives President Trump a fighting chance to make a comeback. The most recent poll from “Just the News” shows Biden up 48-36. Last week, CNN conducted a poll and the Trump administration demanded that it was retracted.

The CNN poll conducted by SSRS shows Trump trailing the former vice president by 14 points, 55-41, among registered voters. It also finds the President’s approval rating at 38%. This level of approval rating by an incumbent President is his worst mark since January 2019, and equal to the approval ratings for one-term Presidents Jimmy Carter and George H.W. Bush at this point in their reelection years.

To attempt to combat the news of the approval rating, President Donald Trump’s campaign is demanding CNN retract and apologize for a recent poll. The demand, coming in the form of a cease and desist letter to CNN President Jeff Zucker was immediately rejected by the network. 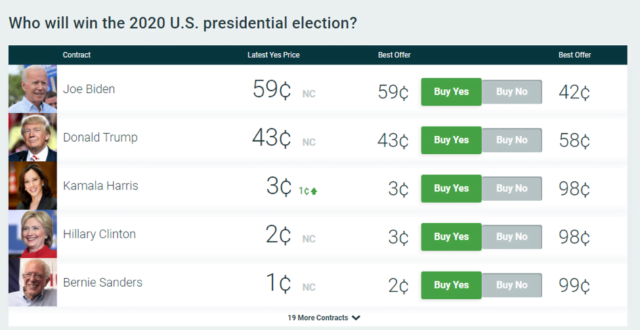 Put Your Money Where you Mouth Is?

One of the more disturbing issues for the incumbent is that its not only the polls that are showing that President Trump is behind. The betting market shows that he is also way behind Joe Biden. Betting markets like Predictit, show that Joe Biden is behind by 16-points, with more than 100-million shares on the line. In February, Trump was ahead by 20-points according to the betting market, but the combination of the President’s reaction to the spread of COVID-19 and his non-response to the murder of George Floyd has led to a rapid decline in his odds of being re-elected President of the United States. It’s impossible to demand that a foreign betting market pull down their site and retract the publication of its results, but no one would put this by the Trump Campaign.

How is This Impacting the Markets?

The markets continue to fluctuate, but few are focused on the Presidential election. While initially many believed share trading would tumble, but it appears that market participants are coming to grips with this possibility. Biden has already said he would raise corporate taxes and bring that back to levels before the Trump administration. Agricultural prices could also rebound as a “Biden” administration would likely be more friendly with China.